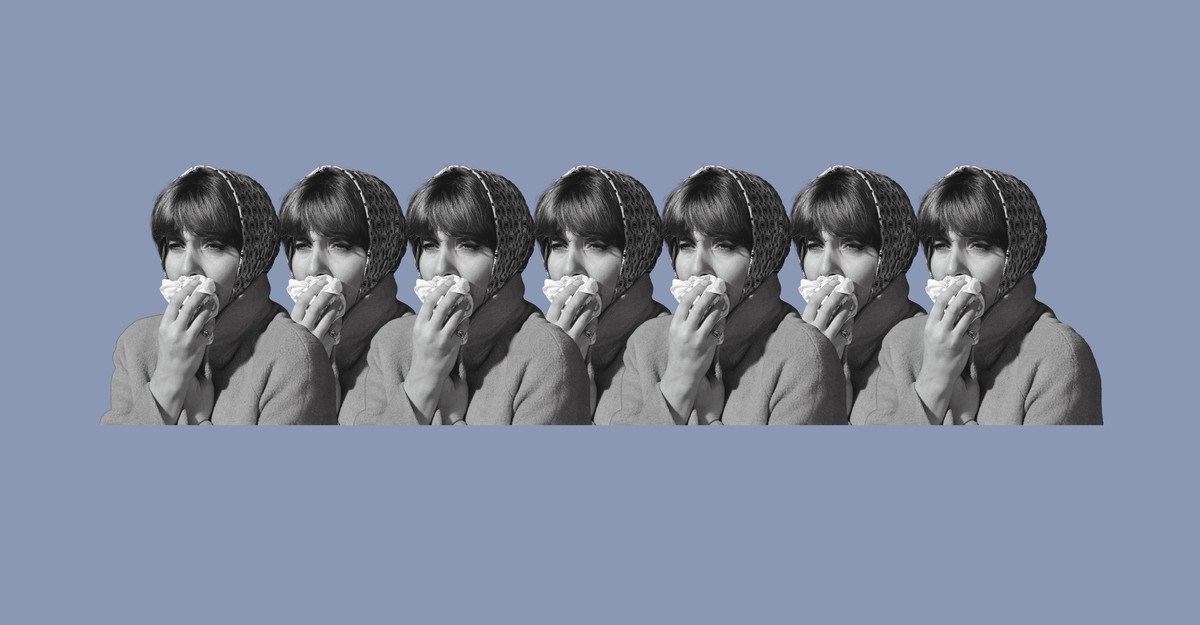 Two and a half years and billions of estimated infections into this pandemic, SARS-CoV-2’s visit has clearly turned into a permanent stay. Experts knew from early on that, for almost everyone, infection with this coronavirus would be inevitable. As James Hamblin memorably put it back in February 2020, “You’re Likely to Get the Coronavirus.” By this point, in fact, most Americans have. But now, as wave after wave continues to pummel the globe, a grimmer reality is playing out. You’re not just likely to get the coronavirus. You’re likely to get it again and again and again.

“I personally know several individuals who have had COVID in almost every wave,” says Salim Abdool Karim, a clinical infectious-diseases epidemiologist and the director of the Center for the AIDS Program of Research in South Africa, which has experienced five meticulously tracked surges, and where just one-third of the population is vaccinated. Experts doubt that clip of reinfection—several times a year—will continue over the long term, given the continued ratcheting up of immunity and potential slowdown of variant emergence. But a more sluggish rate would still lead to lots of comeback cases. Aubree Gordon, an epidemiologist at the University of Michigan, told me that her best guess for the future has the virus infiltrating each of us, on average, every three years or so. “Barring some intervention that really changes the landscape,” she said, “we will all get SARS-CoV-2 multiple times in our life.”

If Gordon is right about this thrice(ish)-per-decade pace, that would be on par with what we experience with flu viruses, which scientists estimate hit us about every two to five years, less often in adulthood. It also matches up well with the documented cadence of the four other coronaviruses that seasonally trouble humans, and cause common colds. If SARS-CoV-2 joins this mix of microbes that irk us on an intermittent schedule, we might not have to worry much. The fact that colds, flus, and stomach bugs routinely reinfect hasn’t shredded the social fabric. “For large portions of the population, this is an inconvenience,” Paul Thomas, an immunologist at St. Jude Children’s Research Hospital, in Tennessee, told me. Perhaps, as several experts have posited since the pandemic’s early days, SARS-CoV-2 will just become the fifth cold-causing coronavirus.

Or maybe not. This virus seems capable of tangling into just about every tissue in the body, affecting organs such as the heart, brain, liver, kidneys, and gut; it has already claimed the lives of millions, while saddling countless others with symptoms that can linger for months or years. Experts think the typical SARS-CoV-2 infection is likely to get less dangerous, as population immunity builds and broadens. But considering our current baseline, “less dangerous” could still be terrible—and it’s not clear exactly where we’re headed. When it comes to reinfection, we “just don’t know enough,” says Emily Landon, an infectious-disease physician at the University of Chicago.

For now, every infection, and every subsequent reinfection, remains a toss of the dice. “Really, it’s a gamble,” says Ziyad Al-Aly, a clinical epidemiologist and long-COVID researcher at Washington University in St. Louis. Vaccination and infection-induced immunity may load the dice against landing on severe disease, but that danger will never go away completely, and scientists don’t yet know what happens to people who contract “mild” COVID over and over again. Bouts of illness may well be tempered over time, but multiple exposures could still re-up some of the same risks as before—or even synergize to exact a cumulative toll.

“Will reinfection be really bad, or not a big deal? I think you could fall down on either side,” says Vineet Menachery, a coronavirologist at the University of Texas Medical Branch. “There’s still a lot of gray.”

The majority of infections we witnessed in the pandemic’s early chapters were, of course, first ones. The virus was hitting a brand-new species, which had few defenses to block it. But people have been racking up vaccine doses and infections for years now; immunity is growing on a population scale. Most of us are “no longer starting from scratch,” says Talia Swartz, an infectious-disease physician, virologist, and immunologist at Mount Sinai’s Icahn School of Medicine. Bodies, wised up to the virus’s quirks, can now react more quickly, clobbering it with sharper and speedier strikes.

Future versions of SARS-CoV-2 could continue to shape-shift out of existing antibodies’ reach, as coronaviruses often do. But the body is flush with other fighters that are much tougher to bamboozle—among them, B cells and T cells that can quash a growing infection before it spirals out of control. Those protections tend to build iteratively, as people see pathogens or vaccines more often. People vaccinated three times over, for instance, seem especially well equipped to duke it out with all sorts of SARS-CoV-2 variants, including Omicron and its offshoots.

Gordon, who is tracking large groups of people to study the risk of reinfection, is already starting to document promising patterns: Second infections and post-vaccination infections “are significantly less severe,” she told me, sometimes to the point where people don’t notice them at all. A third or fourth bout might be more muted still; the burden of individual diseases may be headed toward an asymptote of mildness that holds for many years. Gordon and Swartz are both hopeful that the slow accumulation of immunity will also slash people’s chances of developing long COVID. An initial round of vaccine doses seems to at least modestly trim the likelihood of coming down with the condition, and the risk may dwindle further as defenses continue to amass. (“We do need more data on that,” Gordon said.)

Immunity, though, is neither binary nor permanent. Even if SARS-CoV-2’s assaults are blunted over time, there are no guarantees about the degree to which that happens, or how long it lasts. Maybe most future tussles with COVID will feel like nothing more than a shrimpy common cold. Or maybe they’ll end up like brutal flus. Wherever the average COVID case of the future lands, no two people’s experience of reinfection will be the same. Some may end up never getting sick again, at least not noticeably; others might find themselves falling ill much more frequently. A slew of factors could end up weighting the dice toward severe disease—among them, a person’s genetics, age, underlying medical conditions, health-care access, and frequency or magnitude of exposure to the virus. COVID redux could pose an especially big threat to people who are immunocompromised. And for everyone else, no amount of viral dampening can totally eliminate the chance, however small it may be, of getting very sick.

Long COVID, too, might remain a possibility with every discrete bout of illness. Or maybe the effects of a slow-but-steady trickle of minor, fast-resolving infections would sum together, and bring about the condition. Every time the body’s defenses are engaged, it “takes a lot of energy, and causes tissue damage,” Thomas told me. Should that become a near-constant barrage, “that’s probably not great for you.” But Swartz said she worries far more about that happening with viruses that chronically infect people, such as HIV. Bodies are resilient, especially when they’re offered time to rest, and she doubts that reinfection with a typically ephemeral virus such as SARS-CoV-2 would cause mounting damage. “The cumulative effect is more likely to be protective than detrimental,” she said, because of the immunity that’s laid down each time.

Al-Aly sees cause for worry either way. He is now running studies to track the long-term consequences of repeat encounters with the virus, and although the data are still emerging, he thinks that people who have caught the virus twice or thrice may be more likely to become long-haulers than those who have had it just once.

There’s still a lot about SARS-CoV-2, and the body’s response to it, that researchers don’t fully understand. Some other microbes, when they reinvade us, can fire up the immune system in unhelpful ways, driving bad bouts of inflammation that burn through the body, or duping certain defensive molecules into aiding, rather than blocking, the virus’s siege. Researchers don’t think SARS-CoV-2 will do the same. But this pathogen is “much more formidable than even someone working on coronaviruses would have expected,” Menachery told me. It could still reveal some new, insidious qualities down the line.

Studying reinfection isn’t easy: To home in on the phenomenon and its consequences, scientists have to monitor large groups of people over long periods of time, trying to catch as many viral invasions as possible, including asymptomatic ones that might not be picked up without very frequent testing. Seasonal encounters with pathogens other than SARS-CoV-2 don’t often worry us—but perhaps that’s because we’re still working to understand their toll. “Have we been underestimating long-term consequences from other repeat infections?” Thomas said. “The answer is probably almost certainly yes.”

Of the experts I spoke with for this story, several told me they hadn’t yet been knowingly infected by SARS-CoV-2; of those who had, none were eager for the sequel. Menachery is in the latter group. He was one of the first people in his community to catch the virus, back in March of 2020, when his entire family fell ill. That November, he discovered that he had lost most of his kidney function, a rapid deterioration that he and his doctors suspect, but cannot prove, was exacerbated by COVID. Menachery received a transplant three months ago, and has been taking immunosuppressive medications since—a major shift to his risk status, and his outlook on reinfection writ large. “So I wear my mask everywhere,” he told me, as do his wife and their three young kids. Should the virus return for him, it’s not totally clear what might happen next. “I’m nervous about reinfection,” he said. “I have reason to be.”

Almost no one can expect to avoid the virus altogether, but that doesn’t mean we can’t limit our exposures. It’s true that the body’s bulwarks against infection tend to erode rather rapidly; it’s true that this virus is very good at splintering into variants and subvariants that can hop over many of the antibodies we make. But the rhythm of reinfection isn’t just about the durability of immunity or the pace of viral evolution. It’s also about our actions and policies, and whether they allow the pathogen to transmit and evolve. Strategies to avoid infection—to make it as infrequent as possible, for as many people as possible—remain options, in the form of vaccination, masking, ventilation, paid sick leave, and more. “There are still very good reasons” to keep exposures few and far between, Landon, of the University of Chicago, told me. Putting off reinfection creates fewer opportunities for harm: The dice are less likely to land on severe disease (or chronic illness) when they’re rolled less often overall. It also buys us time to enhance our understanding of the virus, and improve our tools to fight it. “The more we know about COVID when we get COVID,” the better off we’ll be, she said.

Read: The coronavirus’s next move

SARS-CoV-2 may yet become another common-cold coronavirus, no more likely to screw with its hosts the fifth time it infects them than the first. But that’s no guarantee. The outlooks of the experts I spoke with spanned the range from optimism to pessimism, though all agreed that uncertainty loomed. Until we know more, none seemed too eager to gamble with the virus—or with their own health. Any reinfection will likely still pose a threat, “even if it’s not the worst-case scenario,” Abdool Karim told me. “I wouldn’t want to put myself in that position.”