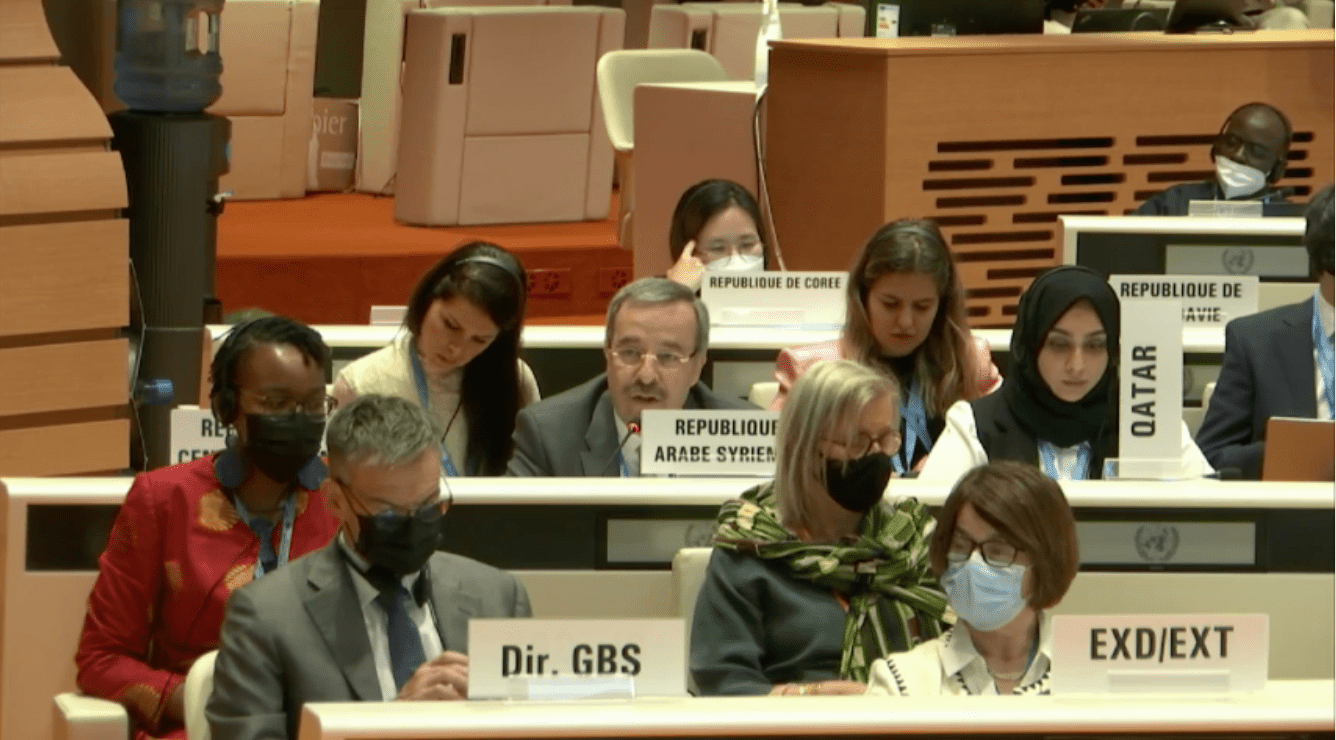 GENEVA, May 25, 2022 – Deviating from its focus on public health emergencies, the annual assembly of the UN’s World Health Organization held a session today singling out Israel, which was condemned in speeches by two dozen countries including Iran, Syria, Venezuela, Turkey, Lebanon and Cuba, for allegedly violating the health rights of Palestinians and the Druze population in the Golan Heights.

By a vote of 77 to 14, with 36 abstentions, the WHO assembly adopted a resolution submitted by Syria — elected by consensus last year to the WHO Executive Board — and the Palestinians, requiring the WHO to hold the same debate at next year’s assembly, and to prepare another report on the “Health conditions in the occupied Palestinian territory, including east Jerusalem, and in the occupied Syrian Golan. ”

The resolution was co-sponsored by countries such as Cuba, Iraq, Libya, Pakistan, Qatar, Saudi Arabia, Turkey, Venezuela and Yemen.

Hillel Neuer, executive director of the Geneva-based UN Watch, an independent non-governmental organization that monitors the UN, condemned the “cynical politicization of the world’s top health agency at the expense of focusing on the COVID-19 pandemic and other global health priorities. ”

“Out of 28 items on the current world health assembly’s agenda,Said Neuer, “only one focused on a specific country — Israel.”

“There has been no agenda item or resolution adopted on any other country, conflict, civil war or political impasse. Nothing on Syria, where hospitals and other medical infrastructure are deliberately bombed by Syrian and Russian forces; nothing on Afghanistan where the Taliban takeover has led to a collapse in basic health systems; and nothing on Ethiopia where more than 5 million people in Tigray are in dire need of humanitarian support, including health care, due to the conflict there, ”said Neuer.

For the first time, a resolution may be adopted tomorrow on Ukraine.

Syria, which last year was elected by consensus to the WHO executive board, accused Israel of “deliberate and systematic bombing of hospitals, healthcare facilities and personnel.” He said the agenda item targeting Israel would remain on the agenda “as long as the occupation remains and until the virus is eradicated and the symptoms disappear.”

North Korea’s delegate said: “We appreciate the WHO director for his report and efforts to alleviate the suffering of the Palestinian people. The brutality of Israeli atrocities against Palestinians and other Arabs in occupied territories has become institutionalized and undisguised. ”

Iran’s delegate said: “As the moral force behind the Zionist movement is a sense of exceptionalism, racism and superiority, it can expand only by provoking and promoting wars and conflicts. The Israeli regime is therefore a destabilizing force by nature as per its genesis and the force that sustains it is an indelible not incidental feature of Zionism. ”

Neuer condemned the inflammatory remarks. “Today’s assault on Israel at the WHO by some of the world’s most oppressive regimes promoted the lie that Israel is harming Palestinian health rights,” said Neuer. “The opposite is true.

“The regimes who today attacked the Jewish state were projecting: the more oppressive they are to their own people and to their minorities, the more they resort to trying to demonize the only democracy in the Middle East.” Click here to see more quotes and videos from today’s debate.

Today the WHO held its annual debate targeting Israel. https://t.co/gH8Ph7LJDo

🇮🇷 Islamic Republic of Iran: “As the moral force behind the Zionist movement is a sense of exceptionalism, racism and superiority, it can expand only by provoking and promoting wars and conflicts.” pic.twitter.com/wwQnwiKobL

Today the WHO targeted Israel. https://t.co/jEcovCmCcZ

🇸🇾 Syria: “The protracted Israeli colonial occupation of the Syrian Golan negatively impacts the living conditions of Syrian citizens under occupation & violates their basic human rights, including the right to health.” pic.twitter.com/4tE9jvDVVz

UN Watch applauded the Netherlands and Austria for shifting their votes from Abstain last year to No today. Those that voted No like last year were the US, UK, Australia, Brazil, Cameroon, Canada, Colombia, Czech Republic, Germany, Hungary, and Israel.

“However, the minority of EU member states and other democracies who voted for the absurd resolution should be ashamed, including France, Spain, Switzerland, Belgium, Portugal, Japan, India, Ireland, New Zealand and Luxembourg.”

“These countries have now encouraged the continued hijacking of the world’s health priorities, and the diversion of precious time, money, and resources to fight global disease, in order to wage a political prosecution of Israel.”

“Anyone who has ever walked into an Israeli hospital or clinic knows that they provide world-class health care to thousands of Palestinian Arabs as well as to Syrians fleeing Assad,” Neuer added.

Today’s resolution mandates the WHO director-general to prepare another report next year, to be submitted to the 76th World Health Assembly in 2022, thereby ensuring another day devoted to vitriolic accusations against Israel by Iran, Syria, Venezuela and others.

Like last year’s text, the resolution falsely implied Israeli culpability by calling for “non-discriminatory, affordable and equitable access to COVID-19 vaccines” for Palestinians in the disputed territories and Syrians in the Golan Heights.

And keeping the 2021 text, in an apparent reference to last year’s 11-day Hamas-Israel conflict, the resolution calls for an assessment of “the extent and nature of psychiatric morbidity, and other forms of mental health problems, resulting from protracted aerial and other forms of bombing among the population. ”

By passing the resolution, the assembly also adopted a WHO report which claims that fatalities and injuries in the Gaza Strip were “the result of occupation-related violence in 2021,” despite Israel having withdrawn from Gaza in 2005. The report claimed the majority of these fatalities and injuries occurring “during the military escalation” of May 2021. Hamas and Islamic Jihad were nowhere mentioned.

The WHO report likewise fails to acknowledge legitimate Israeli security concerns when it calls on Israel to “end the arbitrary delay” of permits for Palestinian patients and the movement of ambulances and health care staff at checkpoints.

The WHO report blames “physical obstacles of Israel’s separation barrier, settlement infrastructure and the extensive number of fixed and ‘flying’ checkpoints” for creating barriers to health care provision and states that the Gaza Strip is “under closure and blockade with severe limitations to entry and exit, ”ignoring the deadly Palestinian terrorism which has made such barriers and the Gaza restrictions a necessity in the first place.