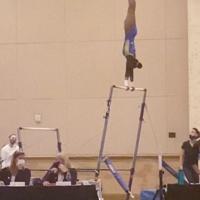 In December, the junior at James Caldwell High School took her first plane ride to compete at the Atlantis Crown Invitational in Nassau, Bahamas.

She returned to West Caldwell a first-place All Around champion.

“It was so much fun. It was such a really great experience, ”she said. “The Alexis Crown meet was a very exciting experience.”

More than 600 gymnasts took part in the competition divided into divisions based on age. Phenix, 16, was in a more experienced division and she beat other gymnasts from the United States and as far away as England.

To become an All Around champion, she competed in four different events using different apparatuses: the floor, vault, uneven bars and balance beam.

“All for my events average out to my total score and that’s how I got first-place All Around.”

Phenix did not place lower than third in any event. She was first in vault, second in floor and uneven bars, and third in balance beam.

Caldwell does not have a gymnastics team, but when Phenix competes, her classmates cheer her on.

“They’re very supportive. They come and support and everything. I know a couple of my teachers also said that they want to see me compete, too. ”

Phenix’s mother, Artessa, said that as far back as the second grade, teachers have been helping Phenix stay on top of classwork while she goes to competitions. She has been an honor roll student since she started competing at 7 years old.

“She’s a student-athlete. First she’s a student, then she’s an athlete, ”said Artessa. “If we see that she does not start keeping up with her work and her grades start showing it, the gymnastics goes away.”

The Wyche family has competing and sports woven into their DNA. Artessa also a gymnast and went to college on a basketball scholarship. Phenix’s father played football and other members of the family also had college sports scholarships.

Asked about her future plans, Phenix said, “Definitely an NCAA champion on uneven bars. That’s my big dream, is to go do college gymnastics and get a perfect 10 on the uneven bars. ”

She also dreams of getting a scholarship to a Division I university to compete in gymnastics.

When she realized that all she wanted to do was gymnastics, she began training with North Stars Gymnastics Academy in Boonton.

It has been sending gymnasts to competitions nationally and internationally for more than 35 years and is ranked as the No. 1 gymnastics school in New Jersey and seventh nationwide.

“All the coaches at North Stars Gymnastics Academy are caring, talented and dedicated to me and all of their gymnasts,” said Phenix. “I appreciate them so much.

“Coach Ivan (Taskova) is one of my odd-bars coaches. He believes in me and motivates me to keep on pushing through good and bad uneven-bar days. He is my inspiration on the uneven bars.

“Coach Ashley (Umberger) is one of my floor exercise coaches. She always motivates me to get out on the floor and give an amazing performance while focusing on technique and having fun. ”

Phenix wants to be as good as Olympians, such as Gabby Douglas and Simone Biles.

“When I saw Gabby Douglas at the Olympics doing uneven bars and flying through them …, I was like, wow, I definitely want to be there. I see myself doing this. ”

When she has downtime, Phenix enjoys going to the movies with her friends and bowling. She enjoys other sports, such as swimming and fishing, which she does with her grandfather sometimes as early as four in the morning.

Her mother said, “Gymnastics is literally 80 percent mental, 20 percent physical. And you saw that with Simone (Biles) last year, when you had it twisted or your head not in there. You can really hang it up. It does not matter how talented you are.

Phenix and her family also love binge-watching anime. Recently, she has been watching the second season of “Demon Slayer.” Her all-time favorite anime is “Attack on Titan.”

“Before meets, I listen to anime music. It’s my hype music. It gets me excited. ”

Artessa says Phenix listened to the “Attack on Titan” theme song five times as a ritual to help her win first-place All-Around champion in the Bahamas. She listened to it the first four times for the four different events she competed in and one last time for her to win the championship.