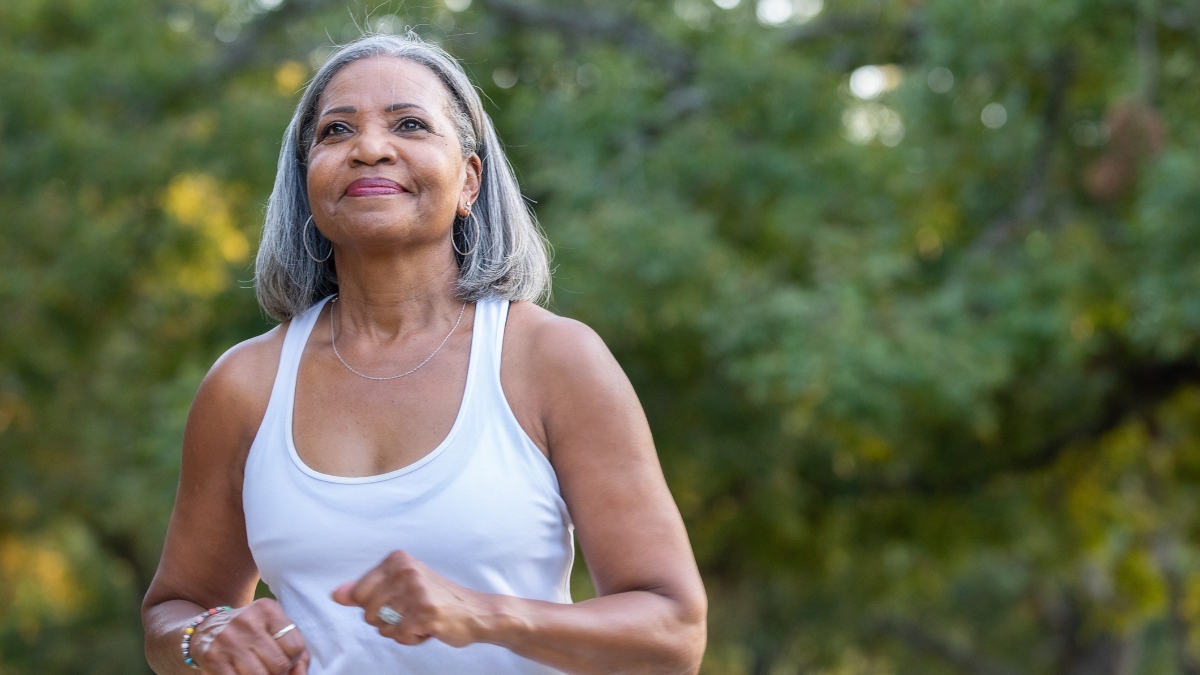 Our bodies go through an enormous amount of change during and after menopause. As we navigate the journey, being patient with ourselves (and kind to our bodies) is essential. But what’s the best way to practice self-care in our postmenopausal years? If you’re tempted to exhaust yourself with rigorous physical exercise in an attempt to get back your “pre-menopause” body (whatever that means) you might want to slow down – literally. New research suggests that walking slowly for a long period of time burns more body fat than walking quickly for a short amount of time.

If you’ve had a sneaking suspicion over the years that this was true, you’ll be glad to know that now there’s evidence to back it up. In the 2022 study published in Nutrients, researchers from the School of Kinesiology at the University of Michigan focused their investigation on postmenopausal women. The reason? Postmenopausal women are at a high risk of diseases like diabetes, heart disease, and atherosclerosis when they do not get enough exercise.

Setting Up the Study

According to the study authors, postmenopausal women tend to have higher levels of abdominal subcutaneous fat (that’s the belly fat just under the skin) and visceral fat (fat that’s stored deep inside the body, wrapped around organs) than other women. This distinction is important, because not all fat is unhealthy. Reducing fat in specific areas – such as the midsection – can help reduce the risk of many diseases.

Researchers wanted to know what walking speed (and what amount of exercise time) would help reduce fat in these two areas. To find out, they recruited 25 women who had previously participated in a study from the late 1990s. That study, which was also conducted by researchers at the University of Michigan, was published in the journal Bone in 2007.

For the 2022 study (which measured fat loss, not bone strength), those same 25 women had to follow a certain walking regimen for 15 weeks. After 15 weeks, nine women finished the study, and 16 continued for another 15 weeks (totaling 30 weeks). All the women in the 2022 study were between 50 and 70 years of age, and none of them had had their period for at least one year.

The Link Between Walking Slowly and Burning Fat

Out of the nine women who completed just 15 weeks, none of them lost a significant amount of fat. However, the 16 women who completed 30 weeks did. Out of the 16 women who did 30 weeks of exercise, the ones who walked at a slower pace lost more fat than the ones who walked at a faster pace. Also, fast walkers did not experience fat loss until they completed 30 weeks of exercise. Slow walkers, on the other hand, progressively lost fat throughout the whole study. Better yet, walking slowly reduced levels of subcutaneous spirit visceral fat.

These results are great news for those of us who want to lose body fat without intense exercise. However, the study had some significant issues. With only 25 women completing the experiment, the researchers can not claim that the results apply to all, or even most, postmenopausal women. Just nine women completed 15 weeks of exercise, and only 16 completed 30 weeks. Also, the women who lost more weight had a higher BMI at the start of the experiment. As the researchers acknowledge, people who are overweight tend to lose more weight in response to exercise than people who are at a “normal” weight.

But if the message is that some exercise is better than none, especially if you’re postmenopausal, we agree! Do not worry about your walking speed, and do not let it discourage you. Just get out there! Enjoy being outside, breathe in the fresh air, and take the time to think and relax. Not everything in life has to be rushed.