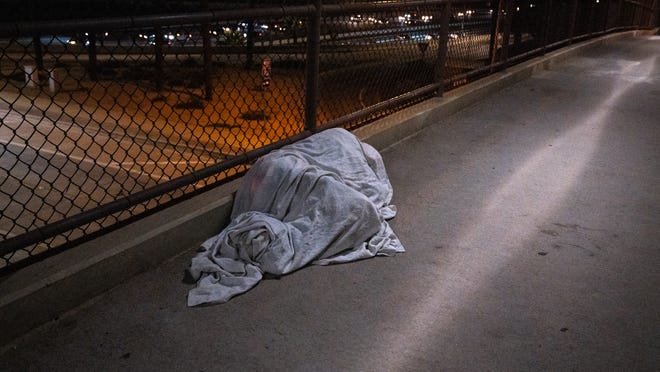 Arizona cities could use federal COVID-19 relief funds to establish sanctioned homeless camping areas under a new bill making its way through the state Legislature.

The encampments would have to offer sanitary facilities, potable water, security and provide mental health, case management and other services to people staying in the camps.

Under the proposal, jurisdictions that choose to set up sanctioned encampments would be required to enforce laws banning street camping anywhere outside of the sanctioned areas.

Critics of the bill said the federal funds would be better spent on permanent housing solutions and would unfairly criminalize people experiencing homelessness who do not want to stay in a sanctioned camp.

Proponents noted the high rates of death of people experiencing homelessness and said a sanctioned camp with security would be more humane than letting people live in unsafe and unsanitary conditions on the street.

“We have tent cities now. The problem is, they are on our streets, next to our businesses, next to our shelters and the folks, they’re not getting the services they need, and that’s why we had 600 people die (on the streets of Maricopa County) last year, “said Sen. David Livingston, R-Peoria, the bill’s sponsor.

SB 1581 and three other bills related to homelessness advanced out of the Senate Appropriations Committee.

This year’s and last year’s bills were pushed by Texas-based think tank The Cicero Institute.

“Why are the deaths increasing? Two simple reasons: Cities refuse to prevent rampant camping and sleeping on the streets, and they refuse to provide viable alternatives. This bill does that,” The Cicero Institute’s Judge Glock said.

Almost every city in Arizona has a law banning street camping, but most cities stopped enforcing them in 2019 after a 9th US Circuit Court of Appeals ruling said homeless people could not be punished for sleeping in public spaces if there was nowhere else for them to go .

Glock believes the sanctioned homeless encampments allowed under the bill would qualify as an alternative to sleeping on the street, allowing cities to begin enforcing their camping bans again.

Not everyone’s sure that will hold up in court.

Hugo Polanco of Wildfire, a poverty-relief nonprofit, said the 9th Circuit decision only allows enforcement of street sleeping bans if a city can offer a bed as an alternative.

“No city in Arizona has enough shelter space to meet that standard,” he said.

“We do not believe structured camping facilities, tent cities, safe parking lots are the best practice. What does end somebody’s homelessness is housing. End of sentence,” she said.

“We have a now problem with rising homeless encampments, and we need a now solution,” Glow said.

The bill ultimately advanced out of committee with bipartisan support after Livingston committed to working with concerned stakeholders on amendments to alleviate their concerns before the bill comes up for a final vote.

‘We’re not lazy’: What homeless people are saying during annual count

Several neighborhood leaders provided impassioned testimony about violent and unsanitary conditions they’ve seen in homeless encampments set up in parks, alleyways and sidewalks near their homes.

They asked the committee to support the bill because it would allow cities to move people experiencing homelessness out of their neighborhoods and into somewhere with services.

Chelsea Friday, who said she lives near 35th Place and Thomas Road in Phoenix, said Major McKenzie, a man experiencing homelessness, attempted to break into her home on July 4, 2020, after her and her husband stopped providing the man with food and water because he was acting aggressively towards residents and other homeless people.

McKenzie was later charged with second-degree murder in a second stabbing that occurred two months earlier.

The other two bills add money into the state’s Housing Trust Fund, which is used to fund affordable housing development, housing assistance programs and homeless shelters.

Before the Great Recession, the Housing Trust Fund collected 55% of revenue from state sales of unclaimed property. But in 2010, the Legislature capped those proceeds at $ 2.5 million each year, using the savings to cover financial gaps and focus on other priorities.

SB 1531 originally would have restored the fund to the ongoing 55% measure, but a last-minute amendment would provide a one-time $ 100 million deposit of American Rescue Plan Act dollars instead.

SB 1263 would create an ongoing revenue stream for the Housing Trust Fund by requiring the Arizona Industrial Development Authority to transfer all revenue in excess of its operating costs to the fund.

Most of the new funds would be earmarked specifically for homeless shelter operations.

Glow, who said the new funding for shelter operations would be about $ 4 million per year, said the additional funds are necessary for shelter providers across the state that used federal funds to purchase new shelter facilities during the COVID-19 pandemic but still need long-term operating dollars to open them.

Some Democrats on the committee expressed concern that the money was earmarked specifically for shelter instead of allowing the Housing Trust Fund autonomy to decide what housing projects it should be used for.

Coverage of housing insecurity on azcentral.com and in The Arizona Republic is supported by a grant from the Arizona Community Foundation.