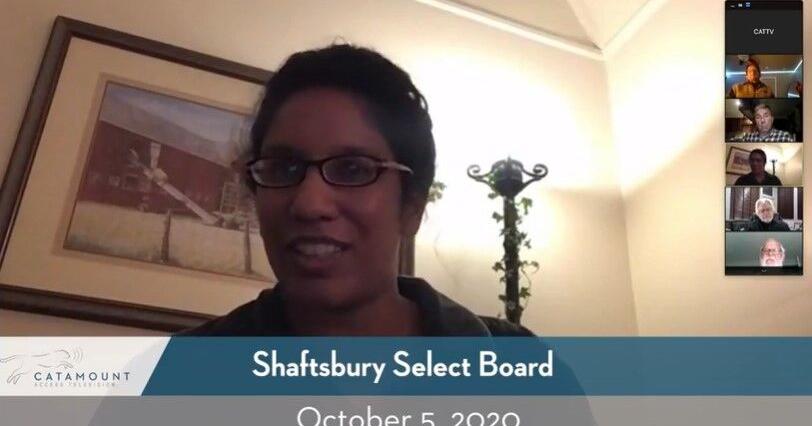 SHAFTSBURY – A member of the Planning Commission has stepped up to challenge a three-term incumbent for his seat on the Shaftsbury Select Board in the only contested board race this year.

While Select Board Chairman Art Whitman is running for re-election, he is unopposed for his seat.

But there is a contested race featuring Martha Cornwell, who is challenging Ken Harrington for a three-year seat.

Both individuals are Shaftsbury natives, although Harrington went away to serve two years in the Army and for work projects. Cornwell left for medical school to become a physician’s assistant.

Cornwell earned her medical degree at the University of New England, and now works at The Memory Clinic in Bennington. She has been a substitute teacher for area middle and high schools for 17 years, works at Clearbrook Farm and recently volunteered with the Vermont Medical Corp, giving COVID shots.

At a televised candidate forum, Cornwell, a woman of color, said she would like to build an inclusive and broad coalition including people of diverse ages, demographic interests and even those who are newcomers, along with lifelong residents.

“I believe our board is stronger when the public is involved with shared decision making,” Cornwell said. “We need to have more representative voices helping to bring us new ideas to our town government. Representation really matters. ”

“Those effects create improvements that benefit all of us in all areas of our lives,” Cornwell said, and it would help bring voices not often heard to decisions, she said.

“Shaftsbury is so full of potential,” Cornwell said. “I’ve spent my lifetime living, working and volunteering here in Bennington County.”

She would like to see Shaftsbury again have a vibrant downtown, and said that can be achieved, but first “we need to rebuild our infrastructure,” including sewer improvements and upgrading high-speed internet, as too many locations in Shaftsbury have slow, or no, internet.

“We can create good jobs, and it starts with the internet,” Cornwell said. “There’s an increasing gap in wealth here in our town. Young people are struggling to find high quality jobs that have living wages. Young people are being left behind. We need to be retooling for tomorrow’s jobs. ”

Housing is another area that will need work to attract workers and businesses.

“I’ve not been able to purchase a home despite making my home here and working a very good job,” Cornwell said, adding that alternative types of housing should be explored, including accessory dwellings and tiny house communities.

Harrington touts experience and fiscal responsibility as reasons he should be sent back for three more years, while Cornwell talks about ideas for increasing diversity and moving Shaftsbury forward.

Harrington, who retired five years ago from Ken Harrington Construction, said he has a lifetime of experience in areas that he said most affect the town finances.

Harrington said town equipment and maintaining town roads are the biggest lines on the town budget. He said running his own construction company for 35 years and working in the industry since he was a teenager, as well as four years as the town highway foreman, give him a leg up in understanding how to best keep a close eye on the purse strings related to highway funds.

Harrington said when he was first elected to the board in 2013, he ran because the board was trying to build a new town garage that was “a lot bigger and more expensive than they needed and they did not have a dime saved.”

He said the town also had a million dollars worth of equipment on lease.

“Now, all the equipment is paid off, and there’s a sinking fund for anything we’ll need to purchase,” Harrington said. “I know what the town needs for equipment, and I do not let them buy things they do not need.”

Harrington said it’s that type of fiscal conservatism the town needs to keep the budget in check and keep taxes low.

“You can waste a lot of money, and if you do not know what you’re doing, you’re going to do that,” Harrington said.

He added that the town should be working hard to make sure Peckham Industries stays put in Shaftsbury, adding, “I’ll do everything I can to get them to stay where they are.”

Harrington said he would like to see something done with the Stanley Tools building.

“It’s just sitting there being underused,” Harrington said, adding that the building could be home to small businesses, apartments and condos.

“It’s a shame,” he said. “It’s a historic building and it’s just sitting there.”

“I’d like to serve another three years,” Harrington said.

Shaftsbury will hold a public information meeting at 3 pm Feb. 27 via Zoom. A link is available through the town website at shaftsburyvt.gov with voting on town officers and ballot articles slated for 7 am to 7 pm March 1, at the town garage.