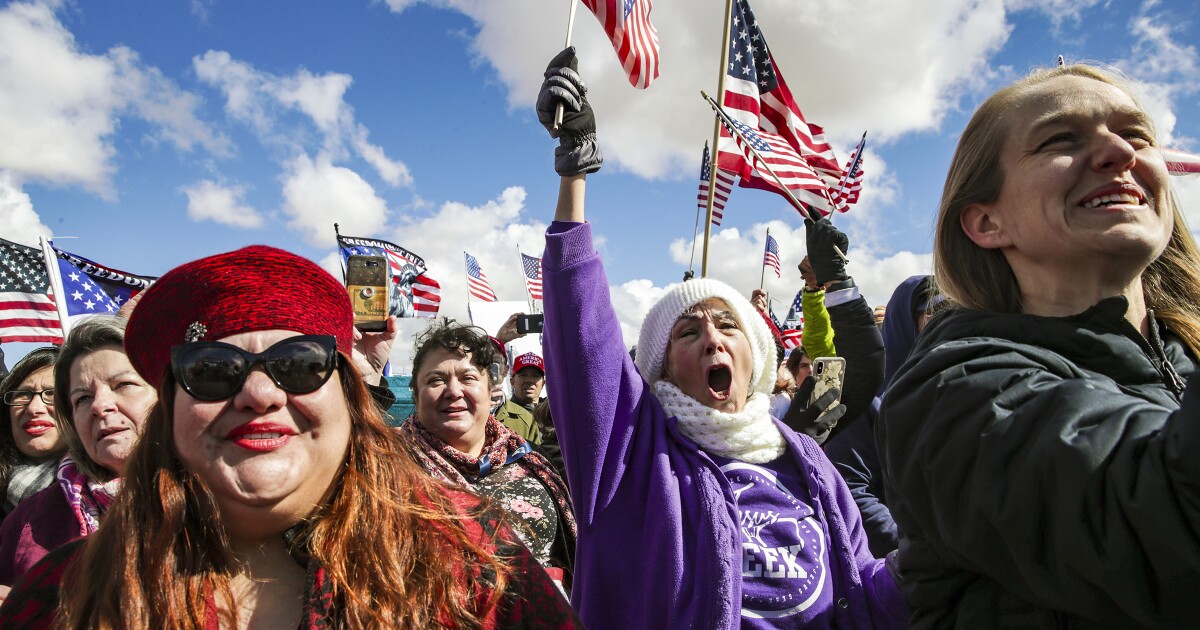 Several hundred people gathered Wednesday morning in the Mojave Desert to send off a group of truckers driving cross-country to protest COVID-19 mandates.

Supporters posed for selfies and gifted homemade cookies and other items to dozens of truck drivers who intend to travel to Washington, DC The convoy is similar to ones whose defiant blockades have shut down border crossings to the north as truckers rallied in Canada over the nation’s response to the pandemic.

Organizers with the group calling itself the People’s Convoy hoped to have 1,000 semi-truck drivers depart from Adelanto Stadium. Fewer than 40 big rigs rolled out, although they were joined by hundreds of other vehicles.

Campers, pickups and SUVs with handwritten messages of support joined the procession of vehicles trailing the trucks onto the highway. Several versions of “God Bless the USA” blared from car stereos.

National organizer Maureen Steele, 57, said the convoy will head to Washington, DC, and is expected to arrive after the State of the Union address Tuesday. But she said the group will not stop at the nation’s Capitol.

“Because we do not want another Jan. 6, ”Steele said, referring to the 2021 insurrection, when a violent mob stormed the US Capitol. “This convoy starts in Barstow and ends in freedom.”

Originally, the rally was meant to start in Barstow but later was changed to Adelanto. As the Omicron surge of the coronavirus has receded across the US and more states begin to lift mask mandates, similar caravans and blockades have started to pop up across the globe. In the US, the loosely organized effort has gained momentum, although talk of a Super Bowl rally never came to fruition. And how many truckers will ultimately participate remains unclear.

Steele said there are different convoys making their way east. Federal officials have expressed concern that some may arrive during President Biden’s address to Congress early next week and could use similar tactics to those that have blocked US-Canada borders for weeks.

Police arrested nearly 200 people last week and towed 79 vehicles after the Canadian government issued emergency powers in response to the blockade in Ottawa.

“Supporting members of the National Guard will not be issued firearms and they will not engage in the surveillance of US or foreign persons, although they are authorized to report any observed criminal activity to appropriate law enforcement personnel,” Kirby said in a statement. “Although participating service members will conduct traffic control, they will not affect arrests or conduct other such law enforcement activities.”

The People’s Convoy organizers are demanding the American government drop all pandemic-related mandates and “re-open the country,” according to a statement from the group.

While COVID-19 cases continue to drop across the country, the Centers for Disease Control and Prevention says the nation averages more than 2,300 deaths from the virus each day. The majority of those are among unvaccinated people.

On Wednesday, before the semi-trucks departed from Adelanto, speakers repeated false claims that COVID-19 vaccines kill more people than they save and promoted the unproven treatment of Ivermectin against the virus.

Organizers said the convoy making its way to the nation’s capital is not driven by partisan issues. But the desert landscape at the rally was replete with “F— Biden” signs and Trump banners. Several trucks were decked out with stickers calling for the release of the Jan. 6 insurrectionists from federal custody, and multiple attendees wore apparel with alt-right and Nazi symbols.

Steele said the People’s Convoy could not help what its supporters wore or waved. When asked whether the convoy was giving credibility to fringe elements based on their anti-mandate views, Steele shook her head, saying the claim had already been made by Canadian Prime Minister Justin Trudeau.

“It’s just as absurd as when Trudeau said it, and it’s absurd to see it that way now,” Steele said. “Canada and the rest of the world are looking to America to keep the light.”

Ken Jones, who waved Gadsden, American and Canadian flags near a honking line of cars, called the convoy emotional.

“I just want my freedom back,” Jones said. “But maybe also let’s get Trump back in there.”

The convoy’s 11-day trek will make stops in Arizona, Texas, Oklahoma, Missouri and other states. Organizers expect more truckers and other supporters to join as they approach the DC Beltway area.

Truck driver Ryan Nelson, 43, did not see the convoy or the push against the pandemic mandates as partisan issues.

“It’s about freedom. This is all about government overreach, ”Nelson said as supporters handed him candy, money and safety equipment. “I’m not worried about what’s going to happen.”

Truck driver Zeus Elledge, 36, says he’s making the trip for his 11-year-old son, who will join his dad on the journey.

“I’m doing this for my son. I do not think he should have to get a vaccine, ”said Elledge, who typically hauls soil and rocks and says construction in the housing market has helped his work, but he expects it to slow down.

He learned about the convoy two weeks earlier and decided he would take his son on the trip.