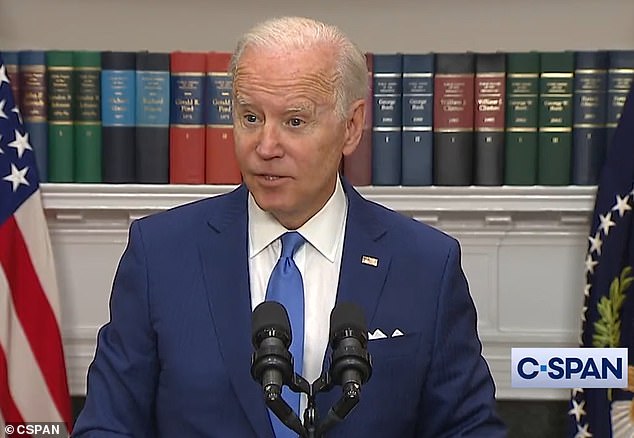 The White House is considering using income caps to exclude high earners, and those who took out loans for medicine and law degrees, from being eligible for student-loan relief.

Officials of the Biden administration are looking at limiting the relief to people earning less than $125,000 to $150,000 for individual filers, or $250,000 to $300,000 for couples filing joint taxes, according to a new report released Saturday by the Washington Post.

A source told the Post that there are different proposals being floated around about how to structure this, but no final decision has been made on the plans.

They added that administration and Congressional staff have focused their conversation on ‘how to best meet the president’s desire to ensure the most economically vulnerable people with student debt benefit from any action.’

The source said the administration also discussed limiting forgiveness to undergraduate loans, excluding those who had taken out loans for professional degrees in fields such as law and medicine.

The discussion of using income caps to exclude high earners comes after Biden told reporters this week that he’s looking at ‘debt forgiveness’ for some of the $1.6 trillion in student debt held by roughly 43 million Americans.

Biden ruled out suggestions to wipe out as much as $50,000 per person but left the door open to a smaller relief sum to be decided in the ‘next couple of weeks.’

It comes amid a barrage of Republican criticism, primarily focused on the tax burden that blanket forgiveness would shift to everyday Americans.

‘FACT → Debt cannot be “forgiven.” It can only be transferred. Someone always has to pay,’ McCarthy wrote on Twitter.

The California Republican rolled out a list of ‘winners’ and ‘losers’ should the president follows through on forgiving part of the $1.6 trillion in student loans held by some 43 million Americans.

It’s possible that Biden’s plans will include means testing, which involves limiting by income who would see their debts forgiven.

‘He has talked in the past about how, you know, he doesn’t believe that millionaires and billionaires, obviously, should benefit, or even people from the highest income,’ White House press secretary Jen Psaki said Thursday. ‘So that’s certainly something he would be looking at.’

During the campaign, when Biden was consolidating support in the Democratic primary, he pledged to ‘immediately’ cancel $10,000 in federal student loan debt per person.

But he did not use his executive authority to do so once in office – whether he has such power remains the subject of debate in Washington.

On Thursday, Biden said that he’s taking a ‘hard look’ at the matter of student-loan relief and expects to make a decision ‘in the next couple of weeks.’

Late last month, nearly 100 lawmakers led by Senate Majority Leader Chuck Schumer and Senator Elizabeth Warren signed onto a letter urging Biden to forgive as much as $50,000 per borrower.

That would still total roughly $1 trillion, according to a Brookings Institute analysis. It’s more than the U.S. government has spent on supplemental social security income and housing assistance programs respectively across a 20-year period.

‘As Socialist Democrats plot a transfer of student loan debt, here is who wins and who loses,’ McCarthy said.

‘The two ‘winners’ in the scenario, which does not yet have any sort of price tag, are ‘High earners, like doctors and lawyers, who hold 39% of America’s student loan debt’ and ‘Colleges and Universities, who can hike prices since the government is paying.’

McCarthy’s ‘losers’ list is nearly triple in length, including ‘taxpayers, who would be on the hook for paying the loans’ and ‘students and parents who already paid off their loans’ or refinanced them.

He claimed it would also burden ‘future students’ with higher tuition costs as well as anyone with other forms of debt ‘as their payments pile up.’

The House Republican Leader rolled out a list of ‘winners’ and ‘losers’ in a scenario where President Biden cancels some or all of the $1.6 trillion in federal student loan debt

‘Every single American’ also loses, the GOP Leader said, ‘as this does nothing to solve our debt crisis and will drive inflation even higher.’

Inflation reached a decades-record high in March, rising 8.5 percent over the year prior.

Senator Tom Cotton (R-Ark.) claimed it would result in $13,000 of new debt for ‘every family in America.’

‘Why should those who didn’t go to college or responsibly paid their loans be responsible for $13,000 in new debt?’ Cotton wrote on Twitter.

Moderate Republican Senator Mitt Romney (R-Utah), who has voted with Democrats to pass Biden’s agenda before, slammed the debt forgiveness as ‘desperate.’

And a group of Republican senators are introducing a bill that would ban the president from mass student loan forgiveness.

‘Taxpayers and working families should not be responsible for continuing to bear the costs associated with this suspension of repayment,’ Thune told Fox in a statement.

Democrat lawmakers, meanwhile, have also been calling reforms to low-income payment plans like the income-driven repayment program (IDR) and Public Service Loan Forgiveness Program (PSLF), which have been found to be plagued with issues.

For student loan activists, this week began with hope as Biden gave his clearest indication that he was considering canceling federal debt rather than simply allowing borrowers to defer payments during the pandemic.

Progressives have long called on Biden to use executive action to cancel student debt (pictured: Rep. Ilhan Omar at a student debt protest on April 27)

But that soon gave way to disappointment when Biden signaled days later that any debt relief would be much less than activists wanted. So Melissa Byrne, one of the organizers who has been leading the charge, got back to work.

First, she tweeted that activists need to ‘ramp up’ their efforts, stay ‘warm + fuzzy’ and ‘fight until we win.’ (‘White House staff reads tweets,’ she explained.) Then she and her allies dove into their group chats as they considered ways to keep the pressure on.

‘We need to keep our eye on the prize,’ Byrne said.

The flurry of activity comes in a crucial stretch, with Biden saying he would make a decision in the coming weeks. After promising to address the issue during his campaign for president, he’s now weighing how much federal student loan debt should be canceled and who should benefit.

Critics caution that forgiving debt might anger voters who already paid off their loans, and Republicans describe the idea as a political giveaway in a midterm election year.

However, an expansive approach could buoy young people whom Democrats view as a central part of their coalition, allowing Biden to deliver concrete results when many of his proposals from the left remain stalled on Capitol Hill.

John Della Volpe, director of polling at the Harvard Kennedy School Institute of Politics, said student loan forgiveness is ‘a cornerstone in the relationship between President Biden and young Americans.’

Without young voters on board, ‘we don’t have a Democratic House, a Democratic Senate and a Democratic president,’ said Della Volpe, who worked as a consultant for Biden’s campaign.

About 43 million Americans owe $1.6 trillion on their student loans, more than either credit cards or car payments. It’s a growing problem for younger people, who have assumed more and more debt to finance their educations when public funding for colleges has declined.

And it’s a challenge that Biden has personally experienced. While running for office, he told a student in New Hampshire that he ‘ended up with a debt of over $280,000’ to pay for college and graduate school for his three children.

In a poll of Americans under 30 years old conducted by the Harvard Kennedy School and released on Monday, 85% said the federal government should take some action on student loan debt.

Rep. Ilhan Omar (D-MN) speaks at a Student Loan Forgiveness rally on Pennsylvania Avenue and 17th street near the White House on April 27, 2022 in Washington, DC

Activists demonstrate outside an entrance to the White House calling for the cancellation of student debt in Washington, D.C.

However, opinions were split about the best path forward. Although 38% supported full cancellation, 21% wanted such a step to be taken for only those with the greatest financial needs. In addition, 27% wanted the government to help with repayment, but not debt cancellation.

Biden said Thursday that he was still considering what to do.

‘I’m in the process of taking a hard look at whether or not there will be additional debt forgiveness,’ he said. ‘And I’ll have an answer on that in the next couple of weeks.’

It’s possible that his idea will include means testing, which involves limiting by income who would see their debts forgiven.

‘He has talked in the past about how, you know, he doesn´t believe that millionaires and billionaires, obviously, should benefit, or even people from the highest income,’ White House press secretary Jen Psaki said Thursday. ‘So that´s certainly something he would be looking at.’

During the campaign, when Biden was consolidating support in the Democratic primary, he pledged to ‘immediately’ cancel $10,000 in federal student loan debt per person. But he did not use his executive authority to do so once in office – whether he has such power remains the subject of debate in Washington – and Congress took no action on his promise, either.

Now Senate Majority Leader Chuck Schumer, D-N.Y., is calling for $50,000 in debt to be canceled and some activists want all debt wiped out without exception.

Biden’s pending decision comes as he struggles to make progress on other parts of his liberal agenda that could appeal to young people, such as tackling climate change by expanding clean energy.

‘We need to motivate voters and show them that Democrats are fighting for them,’ said Emma Lydon, who lobbies for the Progressive Change Campaign Committee. ‘And this is a slam dunk way to do that.’

Celinda Lake, a Democratic pollster who worked with Biden’s campaign, didn’t see a downside to the inevitable criticism.

‘The voters who are going to grouse about this, we weren’t getting them anyway,’ she said.

However, the issue can still be controversial among Democrats, even evoking raw emotions at times.

‘We just had a fight about this in a focus group last night,’ Lake said.

An older woman who had paid off her debts didn’t like the idea, while a middle-aged man with children was enthusiastic.

Byrne is trying to tip the scales as far as she can, and on Friday she plastered signs around downtown Washington with other activists.

‘President Biden: Not 10k, not 50k, no means-testing,’ said black letters on a hot pink background. ‘Cancel student debt, ALL OF IT.’

Some of the signs went outside places where there would be parties during the weekend of the White House Correspondents´ Association Dinner. Perhaps they would catch the eye of someone influential as they walked by in a tuxedo or evening gown.

Although it’s unclear what Biden’s final decision will be, Byrne said activists have already scored a victory.

‘We’ve won the argument that we have to cancel student loan debt,’ she said. ‘Now it’s about how much we can get.’

IDRs allow borrowers to make payments as a percentage of their income and then have the rest forgiven after 20 or 25 years of making payments.

But out of 4.4 million IDR borrowers who had been paying for 20 years last year, an NPR investigation found that just 32 had their debts canceled.

Earlier this month the Education Department also announced it would be cracking down on ‘forbearance steering,’ a predatory practice that involves pushing borrowers into forbearance rather than an income-driven repayment plan.

PSLF allows people who have worked for the federal government while making qualified loan repayments over a 10-year span to be granted loan forgiveness.

However, the DoE revealed last year that 98 percent of borrowers were being rejected as recently as late in 2021 — despite Biden campaigning on fixing the issue.