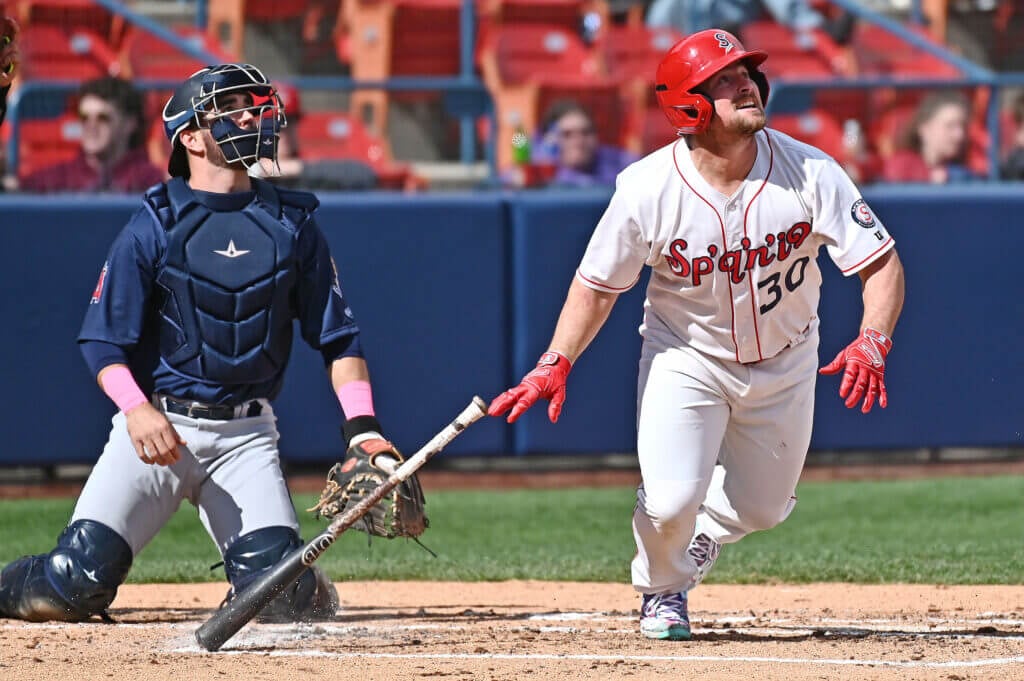 Little about Colin Simpson would seem to qualify as spry. He is a catcher, a 29th-round pick of the Rockies in 2019, and an especially sturdy one at 5-foot-9 and 230 pounds. His nickname is Tank – no explanation required – although Jerry Weinstein, Colorado’s roving catching instructor, drops a different comparison. “He’s like a big sea lion,” Weinstein says with a laugh. “He’s got no bones and all blubber.”

Someone of those proportions should not be spinning heels over head in mid-air, yet there the 25-year-old Simpson is, topsy-turvy with his feet pointed toward the cloud-filled Spokane sky. At a visitor’s sheepish request, Simpson is performing a backflip. So, he stands in foul territory outside the home dugout at Avista Stadium, where minutes earlier he’d laced a walk-off hit for High-A Spokane. He sinks into a squat and then explodes up and backward, pulling his legs above his head.

For a split second, it seems like he will not make it. His head, ball cap still affixed, passes within a foot of the ground. He’s inverted himself so completely, his body casts a tiny shadow on the grass. But then, just as disaster seems close to striking, his legs catch up and he lands firmly on both feet. It’s a trick he performs every now and then, sometimes to the surprise of onlookers and sometimes because they’ve heard about his acrobatics and must see it themselves in order to believe it.

Often, he happily obliges. Backflips and other tricks – including the splits, which he sometimes inadvertently performs while playing first base – are remnants of a previous athletic life. When Simpson was a very young boy growing up in Edmond, Okla., He took up gymnastics. By age 6, he won the Oklahoma state tournament. Long before baseball looked like a viable career, gymnastics looked like his future. So, for four hours every day and six days every week, he practiced, swinging his body around the high bar, exploding off the vault and hoisting himself up on the rings.

That all ended half a lifetime ago, when Simpson was 12. Baseball took over, and now his days are filled with batting practice and catching drills. The only things flying through the air here are supposed to be baseballs. But the muscle memory remains. Everything he could do back then, Simpson says, he can still do now. Baseball is his present – he’s off to a hot start at High A, batting .309 with a .973 OPS and five homers in 78 plate appearances – but he never lets gymnastics feel like it’s too far in the past.

Christi Simpson just needed something for her children to do.

A former cheerleader, she’d taken a coaching position at Oklahoma Gold Gymnastics, and a 4-year-old Colin and his younger sister, Mallory, tagged along. Colin tended to bounce off the walls, and here at least the walls were padded.

“He does not like to sit still,” Christi says. “He comes by it naturally. It was something to burn his energy. “

Before she knew it, though, that something to do became something children really liked to do, and then something they were really good at doing. So, Colin and his sister entered formal training. For two years, Colin was too young to compete. He trained four hours a day nonetheless. He took easily to the high bar and to the vault. He admits he might have been overzealous on the rings. He had one weak spot. “I sucked at pommel horse,” he says. “Terrible. Couldn’t ever figure it out. ”

A young Simpson during his gymnastics days. (Courtesy of Christi Simpson)

When he turned 6, he was cleared for competition, most of which would come against kids a year older. That year, he won the state tournament. Though practices were long, especially for such a young kid, he loved every minute of it. He threw himself into gymnastics with gusto and without fear of failure or injury. If he fell on his face – he recounts one instance that left him carpet-burned from his forehead to his chin – he got back up and tried again.

He gets the sense now that such fearlessness was unusual. He remembers seeing other gymnasts flub what should have been a routine tumble or dismount and suddenly find themselves unable to perform the same trick again. Call it the sport’s version of the yips. “I’ve seen people do round offs with a mental block and in the middle of their backflip, they’ll just open up,” he says. “They freak out.” But that was never him.

The sport was a grind, though. Four hours of intense practice is a lot on a 9- and 10-year-old body, and by the time Simpson grew too old to count his age on his fingers, his enthusiasm for gymnastics had waned. His family had moved away from Edmond and back, switching gyms in the process, and getting to the gym for practice became a tedious commute. As he focused more intently on baseball, there were no longer enough hours in the day for both. At 12, Simpson decided to hang up the unitard.

He was giving up a potential future in the sport. “I could have gone to a college for gymnastics and possibly higher than that,” he says. But he does not dwell on the path not taken, or whether it would have led somewhere more fruitful than where he is now. Gymnastics taught him balance and body control and how to bounce back from failure. It also made a rigorous task like catching seem mild in comparison.

“I’m glad my mom put me in that and gave me a chance to do that,” he says. “It helped me so much in other aspects of my life.”

But he does dwell on another hypothetical. His body may never have forgotten how to flip and twist in the air, but it once did forget a skill that is much more essential to him in his current line of work. Because of a hand surgery gone bad, he once forgot how to throw a baseball.

In March 2016, his freshman year at Oklahoma State, Simpson broke his hamate, one of the bones that form the wrist joint, in his throwing hand. It’s a common baseball injury that requires routine surgery to remove the bone. Most players are back in four weeks. Simpson was back in three.

He played the rest of the season, but something did not feel right. His pinky finger was stuck out to the side, and he had trouble moving it. Over time, the muscles in his hand began to deteriorate. He’s a bigger guy but his right hand began to look frail. “I would flex my hand and you could see the outlines of my bones on my fingers,” he says. Teammates who had undergone the same procedure had come back perfectly fine, but he was getting worse. What was wrong?

It was probably just minor nerve damage, doctors told him. Give it a month and he’d be back to normal. But Simpson did not improve. The season passed – Simpson struggled at the plate, batting just .212 – as did summer. When he returned to campus in the fall for his sophomore season, OSU’s doctors were finally concerned. Simpson underwent exploratory surgery, which revealed that one of the nerves in his hand had accidentally been severed altogether during his initial operation.

Nerves are not like gecko tails; they do not regrow. To compensate, a nerve under the skin of his right forearm was harvested and grafted into his hand. He has no sensation in that spot now, although the edges of his scar are hypersensitive. “If you pull my hair, it feels like you’re pulling my skin off,” he says. The tradeoff is he regained the use of his right hand.

But only to a point. For months, Simpson had to reteach himself how to throw a baseball. It took a while for him to get feeling back in the tips of his fingers, so his throws down to second his sophomore season behaved more like sliders. He could not feel the whip in his arm anymore and subconsciously changed his mechanics so much that he basically shot-putted the ball to second base. Even now, nearing six years since his nerve graft, he estimates his right hand is only “75 or 80 percent of what it was before.”

It will never get better than that, and unlike his unpursued path as a gymnast, that’s something with which he’s still attempting to make peace. His arm is fine now – not exemplary, just fine. But he used to have a cannon. “Before my hand surgery, I could actually throw the crap out of the ball,” he says. Now he can not and he never will again, all because of the carelessness of a surgeon during a routine procedure. “He’s not 100 percent,” his mother says. “He never will be.”

What if that had never happened? he wonders. His junior season, the first he was draft-eligible, he raked with 18 home runs and a .960 OPS. He went undrafted. Instead, the Rockies took him after his senior season in a round that no longer exists. With a better arm, would a team have taken him after his junior season? These days, he backs up 2020 first-round pick Drew Romo. If that nerve had never been severed, would someone be backing up him? Would he be the highly touted catcher and top organizational priority?

There are no answers, only questions.

“I look back to that,” he says, “and I wonder what could have been if that surgery had not gone bad.”

Simpson and his family considered suing his surgeon for malpractice, but an attorney warned them off. Nerve-damaged plaintiffs had lost the use of their legs due to surgical accidents and won only measly sums, the lawyer told the Simpsons. Simpson could still throw a ball and swing a bat, and so they could expect even less. They dropped the idea.

“It would basically cost as much to go through the court case as we would win in return,” Simpson says.

Though he still wonders where he’d be with full functionality in his hand, observers would be hard-pressed to detect any melancholy in Simpson. He’s a buoyant presence on the field and in the dugout. He laughs and cracks jokes and, yes, pulls off a high-flying stunt every so often. “He’s a real culture builder in the dugout,” says Weinstein. “He’s so cute!” says his mother.

He’s naturally gregarious, but that’s also reflective of a choice he’s made. Baseball is supposed to be a good time, and he knows better than most that he could lose it at any moment. “That’s why I come to the field and have fun,” he says. “You never know what’s going to happen.” His teammates enjoy it and they learn from it, sometimes quite literally. Last season, when Simpson was with Low-A Fresno, a series got canceled because of a COVID-19 breakout. In the idle time, pitcher Keegan James asked how to do a backflip. “He taught him in like 20 minutes,” says Romo.

Despite his hot start, Simpson faces long odds of making it all the way to the majors. The round in which he was selected has since been deemed so superfluous that the draft was cut down to 20 rounds beginning last year. It’s not hard to see why – since 2014, only two 29th-rounders have made the big leagues. By hitting .308 / .385 / .558, Simpson is making himself hard to ignore.

Of course, the backflips are pretty eye-catching, too. (Though his mother would like to see more variety. “I’m the one who’s like, ‘do something different,'” she says.) Tanks don’t usually take flight. Consider them a physical expression of his joie de vivre – Simpson literally jumps for joy.

“I practice hard and get my stuff down,” Simpson says. “But I’m going to have fun while I’m doing it.”