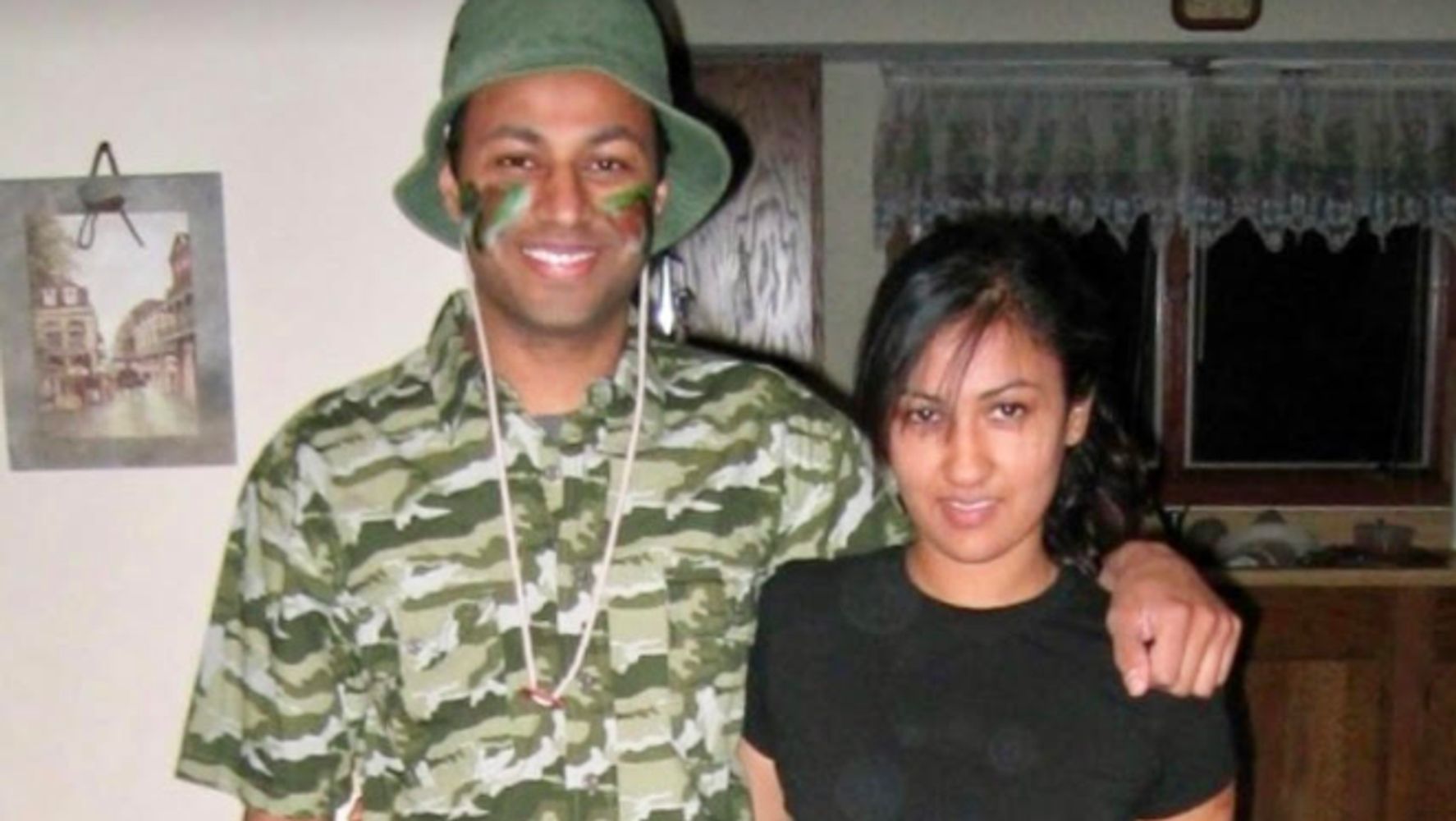 Masks and gloves make me anxious, but not for the reasons you’d think.

They evoke desire for the man I could not have.

Rupesh grabbed his wallet and dashed into the rain, like he was rushing to Target instead of another woman’s arms on Valentine’s Day. He’d just admitted he couldn’t suppress his feelings for me anymore, despite trying for months. I said I appreciated his honesty, but he needed to go fix things with his long-term girlfriend.

I did not tell him I felt the same way, only twice as strong. I did not say I’d been eyeing budget tickets to Greece on Orbitz, imagining us cliff-diving in Santorini, sipping ouzo on the beach. Of course, that was impossible – for starters, I only had $ 7 in savings – but my daydreams defied reality and, apparently, basic math.

I was a 22-year-old daughter of immigrants in my first year of medical school, full of doubt but raised not to show it. Rupesh was my anatomy class lab partner. When he smiled, his forehead rippled gently, like the river I fantasized we’d live by when we retired.

But I’d learned my lesson from complicated relationships: Strength and vulnerability do not intersect. When Rups admitted how he felt about me, I told him not to throw away his four-year relationship over a lab partner with smudgy glasses. I did not put up an ounce of fight for him – for us.

“Go to her,” I said, straightening my back, reminding myself I was a strong woman who made brilliant decisions.

He hesitated, then hurried through the downpour to his rusty Toyota Camry. The engine stalled. Fate intervening, I hoped. He looked for me in his rearview mirror. We were too far apart for our eyes to lock. The engine finally sputtered on. His taillights slowly faded into the thunderstorm and then disappeared in a flash of lightning.

“Blood cells bring oxygen to build new tissue,” a professor had said that morning. “Wounds strengthen as they heal.”

My heart still had old fissures that hadn’t mended fully. I did not want another wound to make me stronger. I could not handle the thought of having to rebuild my tissues again. But driving away was the only person who’d ever made me feel stronger without my armor. I was suddenly terrified.

I wanted to chase him down through the dirty sleet. The $ 120 Timberland boots I’d just splurged on sat in the corner. At that price, they might fly. But I did not move. Love’s vulnerability had burned me before. I would not make the same mistake twice. He had to figure out his own conflicted feelings.

But still … what had I just sacrificed?

Five months before the storm carried him off, we hovered over the generously donated body of an elderly woman in the lab. “Here’s the appendix,” he pointed, his gloved finger accidentally brushing mine. “Here’s the pancreas,” I pointed back, scowling at my stomach flutter.

His rich brown eyes peeked over his mask.

“Want to grab a beer later?” he asked.

I cocked my head as if considering all my invitations. He waited while I pretended to think. “Yeah, that should work.”

“After a couple months, I could not control the dopamine flooding my synapses every time he passed me a scalpel. I forced myself to make appropriate-length eye contact – I worried too short would reveal nervousness and too long would reveal desire. ”

Murphy’s, the campus pub on Green Street, was our place. Every Thursday, our group of med students packed into a booth and got happily buzzed on pints of Bud Light. We teased one of our classmates about overflexing his biceps as he wrote on the board earlier that day. He responded by chugging his beer to demonstrate good esophageal motility.

Rups shone in those moments. His humor shifted seamlessly from highbrow to slapstick. I could skip countless workouts because my abs were so sore from laughing. His intelligence was the biggest turn-on. And man, was he handsome. A couple beers in, he told us his mother covered his nose with her sari when he was born, afraid the villagers in their small Indian town would curse its elegance with the Evil Eye.

But he did not know how to drive a stick. He did not like tennis. He hadn’t read Salman Rushdie, or any literature. Like, ever. Proof, I reasoned, that he was far from perfect.

Besides, he was in a long-term, long-distance relationship. He disappeared from campus on Friday afternoons to spend the weekend with his girlfriend and then reappeared Sunday evenings. Our group never met her; we did not even know her name. Rumor had it they’d been having issues for a while, but he never made that our business.

I did not ask. I was not about to invite another complication into my life. We studied and partied in packs. When the packs atrophied at the end of our hang-outs, the two of us remained. After a couple months, I could not control the dopamine flooding my synapses every time he passed me a scalpel. I forced myself to make appropriate-length eye contact – I worried too short would reveal nervousness and too long would reveal desire.

Sometimes I caught him looking at me, then averting his gaze. Was it yearning? Or was there a glob of a cadaver’s abdominal fat on my cheek? In our situation, you never knew.

But I did know this guy was dangerous. He silently drew me to the lab when I should have been at the library, or a party, or asleep. How many times could I trace the blood supply of the liver? I think we both knew our lab times were an excuse. We lavished formaldehyde-preserved lungs with the attention we could not show each other.

As medical students, we were supposed to be clinical. Decisive. Nearly myopic. We sought perfection we inherently knew was impossible but strove for anyway. We learned from our mistakes. We had to. Mistakes are inevitable, but in medicine, they’re not always OK. If we did not learn our lesson the first time, the consequences were dire.

I’d been that girl who stared at her phone. Who made excuses when the guy did not call. Ignored the thought of who he was with that night. My last breakup floored me, but I eventually adjusted. Recalibrated. A line from Leonard Cohen’s “Hallelujah” became my mantra: “All I’ve ever learned from love is how to shoot somebody who outdrew you.”

I’d learned to splice harmful segments out of my genes and replace them with healthy tissue. Rups had to be spliced.

Over Christmas Break, we returned to our childhood homes. Thinking about him was torture. Stupidly, I’d asked to see a picture of his girlfriend before we left. She looked like Katie Holmes from the “Dawson’s Creek” era: cute on her way to beautiful. I looked down at my dirty scrubs and my chapped hands from hundreds of washings. I thought about my hair that smelled like Purell, no matter how much Pureology I used. Who was I fooling? But the way he looked at me …

It did not matter. I vowed to find a new lab partner. Better yet, go it alone.

When we returned to campus, his smile imploded all my intentions. We started spending more time together under the guise of being friends. But the guise was growing flimsy. It’s hard to pretend when the other person’s face mirrors your feelings exactly. I kept up the pretense, but by mid-February, he dropped it.

One day while we were hanging out, he looked into my eyes like he was searching for his future. I did not look away. He said he had feelings for me and then moved in for a kiss. I turned away. I was not going to be that girl again.

“Go fix your relationship,” I said. “You owe each other that.”

He admitted I was right, then disappeared into the rain.

I did not know if I was being strong or foolish. Probably both. I recalled the lesson I’d already learned: Admitting my feelings was a risk. He’d revealed his, but so what?

I’d tried mixing strength with vulnerability before. I’d announced my dream to pursue writing as a career, but as the eldest child of immigrants sacrificing old worlds to find security in the new, that wasn’t an option. I’d told a past love how I felt. That got shut down, too. Risks began to align with vulnerability more than strength, then shifted entirely. Maybe Rups would have been different. But making myself vulnerable to him veered off the straight and narrow course I’d chosen. It would’ve meant I hadn’t learned from my mistakes.

Still, standing in the doorway as he drove away, raindrops fell around me like tears. At that moment, driving up the cornfield-laden stretch of I-57 was the man I wanted across from me in anatomy lab, across the booth at Murphy’s, and, in my fantasy, across the pillow when daylight opened my eyes.

I decided I could not let the lessons Id already learned be the end of my learning. Some mistakes needed repeating.

I called him. It went directly to voicemail.

“I have feelings for you, too!” I shouted.

I made ten more calls and texts over the next few hours but I did not get an answer. He was making up with his girlfriend, rekindling their relationship over our bottle of ouzo. I was just a foolish girl holding useless lessons in my hands. I’d tried, but it was too late. It was over before it began.

That night, as I tearfully watched “Dawson’s Creek” reruns and picked at leftover pad thai, I heard a knock on my door. There stood Rups: soaking wet, holding a six-pack of root beer in one hand, vanilla ice cream in the other. He smiled at my dropped jaw. “I heard root beer floats are your favorite.”

He said the rain had turned to ice. The highway was a major risk. He called to tell her; they got into a fight. He turned his car around.

I’m still jarred when I see Rupesh, now my husband, wear a surgical mask. The white cords wrapped behind his ears, the blue fabric pulsating when he speaks.

Sometimes when our fingers – now ungloved – accidentally brush, I’m reminded of that with student who doubted strength and vulnerability could intersect. I take a breath. It was never true. The two feed each other – need each other. My anxiety is now just excitement. My mantra has changed.

Sometimes we need to make that second mistake.

Anita Vijayakumar is a Chicago-based writer and psychiatrist. She writes about race, mental health and belonging. Most recently, she completed a novel about two Indian orphans, their hidden past, and their entwined search for identity. You can find here on Twitter at @AnitaV_K.

Do you have a compelling personal story you’d like to see published on HuffPost? Find out what we’re looking for here and send us a pitch!