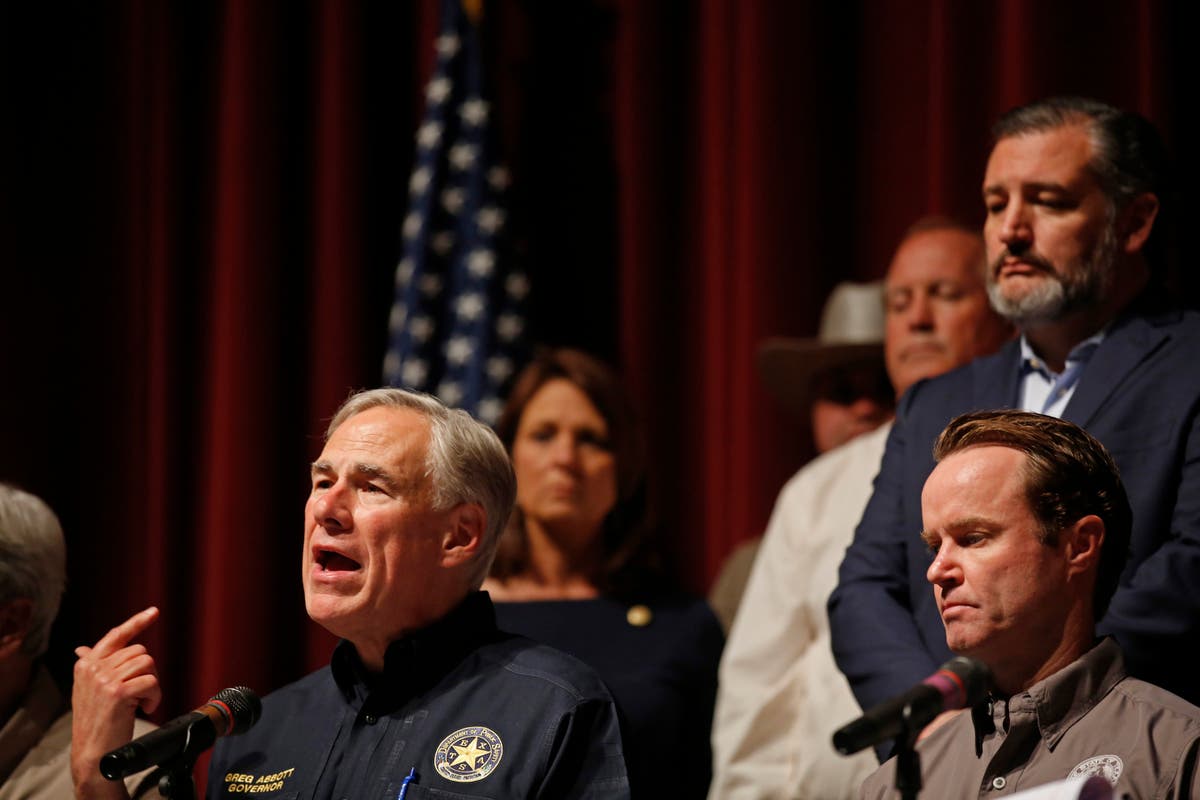 Governor Greg Abbott of Texas railed against the idea that any new gun regulations could have stopped a mass shooting like Tuesday’s massacre in Uvalde that left 21 dead, instead saying during a Wednesday news conference that the state needs to do better to treat mental health.

“The ability of an 18-year-old to buy a long gun has been in place in the state of Texas for more than 60 years, and think about during the time over the course of that 60 years, we have not had episodes like this, ”he said.

“One thing that has substantially changed,” he continued, “is the status of mental health in our communities. What I do know is this: we as a state, we as a society, need to do a better job with mental health. Anybody who shoots somebody else has a mental health challenge, period. ”

Salvador Ramos used one of two AR-15-style assault rifles he purchased legally in the shooting at Robb Elementary School.

Officials said Ramos had no known criminal record or documented mental health challenges, and that “there was no meaningful forewarning of this crime” the system could’ve caught, according to Greg Abbott, aside from social messages about the shooting posted minutes before it took place.

Those who knew the teen, meanwhile, have said the 18-year-old frequently got into fights, committed acts of self-harm, and sent pictures of heavy weapons in his possession to friends and strangers alike.

The governor’s comments, and his staunch commitment to ending most common forms of gun control, has come in for heavy criticism from some following the shooting in Uvalde.

A fracas broke out at the Wednesday news conference with Texas leaders, as gubernatorial candidate Beto O’Rourke approached the podium and yelled, “The time to stop the next shooting is right now and you are doing nothing,” before being hustled out of the auditorium.

After being pressured by reporters, Mr Abbott said gun laws do not make a difference in public safety — even though his own state ranks higher on firearm mortality compared to those with more aggressive gun control regimes.

In fact, Texas, which has some of the most lenient gun laws in the countryhas a virtually equal gun death rate to Illinois, according to CDC data. Gun homicides rates per capita in Texas are nearly double those in California and nearly triple those in New York.

Gun homicides in Texas have increased more than 90 per cent in the state in the last decade, and have been rising almost every year since 2011, according to the Giffords Law Center.

Two of the four deadliest school shootings in the last decade also took place in Texas, as have a number of other shocking mass killings in recent years, including massacres at a military base in Fort Hood, a church in Sutherland Springs, and a Walmart in El Paso.

“In Texas, you can buy semi-automatic rifles at age 18 and carry them around in public without a background check or training, but you’re not old enough to buy beer or cigarettes,” said Shannon Watts, founder of Moms Demand Action for Gun Sense. in America, wrote on social media following the shooting.

“We have to harden these targets so that no one can get in ever except through one entrance,” Lieutenant Governor Dan Patrick told Fox News on Tuesday. “Maybe that would help. Maybe that would stop someone. ”

Governor Abbott has said Uvalde and many parts of Texas lack adequate mental health infrastructure, with those needing care forced to travel to big cities or miss out on treatment altogether.

“There is a greater need for a physical mental health care building in this region,” Mr Abbott said on Wednesday.

Following multiple mass shootings in 2019, including one racist attack at a Walmart that killed 23 shoppers in a predominantly Latinx area, Texas lawmakers implemented a number of mental health and security policies, including the creation of the Texas Mental Health Consortium, and a bill increasing mental health training for educators and offerings for students. Another bill lifted caps on how many teachers can carry guns on campus.

At the same time, Mr Abbott has made it much easier for Texans to access guns, and eliminated requirements about who is fit to carry one.

In 2021, he signed a law ending the requirement that Texans obtain a license to carry a handgun, meaning virtually all people 21 and up can get a gun in the state.

In 2015, his administration also passed laws allowing rifles to be carried in public without a permit, and the same for guns on college campuses.

Some of these policies aren’t popular with voters, polling suggests. A 2021 poll from the University of Texas and the Texas Tribune found that nearly 60 percent of voters in the Lone Star State think adults should not be allowed to bear arms without a permit or license.

Mr Abbott and others have periodically discussed changing gun laws.

After the 2018 Santa Fe school shooting, which killed 10, the governor discussed a red flag law that would let courts take guns away from people deemed dangers to themselves or others.

In 2019, after the Walmart shooting, as well as the shooting spree in Midland and Odessa that killed seven, Mr Abbott considered expanding background checks, including on stranger-to-stranger gun sales, though went silent on the issue at the beginning of the next legislative session in 2021. That same year, he signed the permitless carry law.

After the El Paso shooting, Lieutenant Governor Patrick said he was “Willing to take an arrow”From the National Rifle Association if it meant passing background check provisions, though none such laws passed.

“We do not need another round table of safety experts. We do not need more active-shooter drills, ”Zeph Capo, president of the Texas chapter of the American Federation of Teachers, said in a statement after the shooting. “We need legislation that addresses some of the most basic requirements for ensuring that unstable people do not take the lives of our children and teachers.”