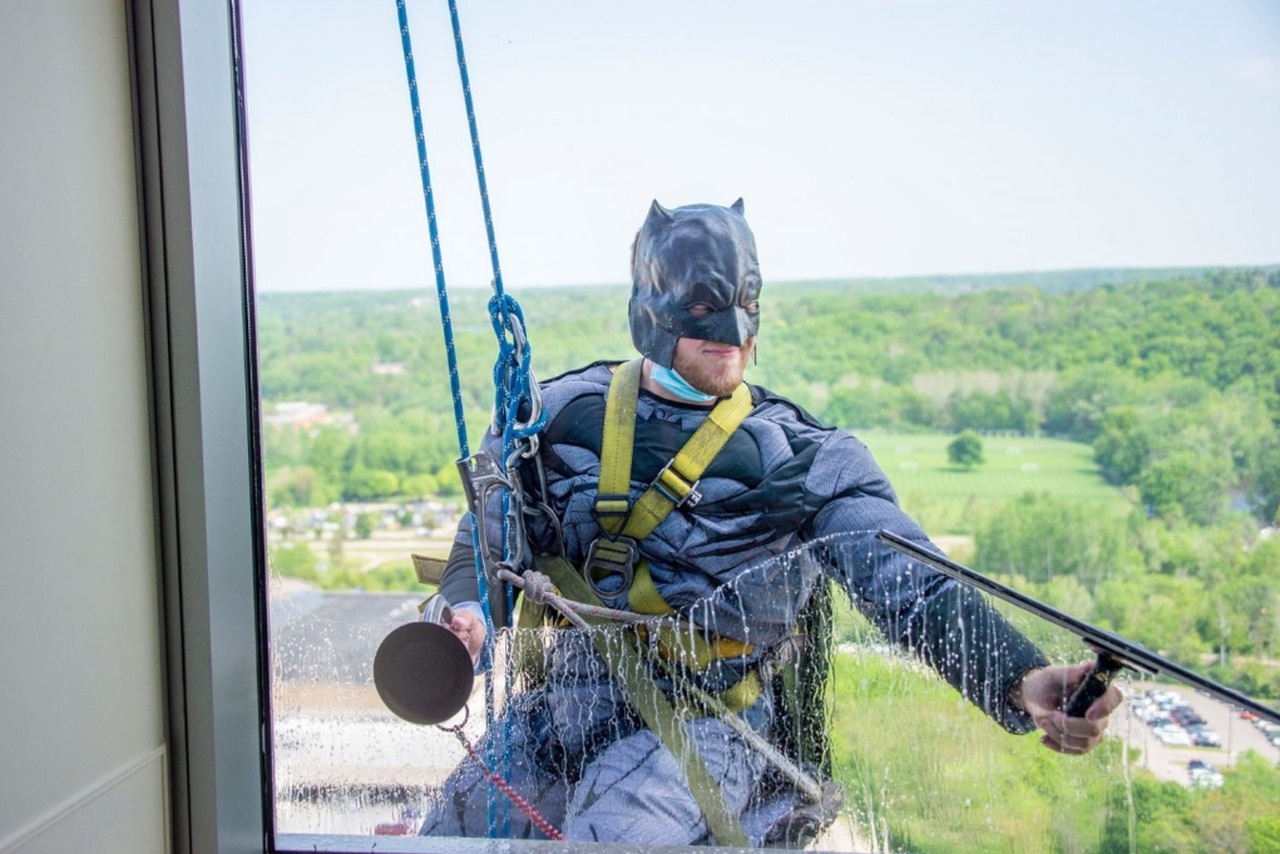 ANN ARBOR, MI – Rachel Vulgaris briefly left the room where her daughter Zoe was receiving infusion treatments for her neutropenia and osteopenia.

When she returned, she found Zoe jumping up and down. The cause for the sudden excitement? Batman made an unexpected visit.

The Batman in question was one of three window washers who scaled the walls of CS Mott Children’s Hospital in Ann Arbor, surprising young patients on “Superhero Day” on April 28.

The moment was thrilling for 7-year-old Zoe, her mother said, since it broke the usual tedium of her infusion visits.

“She knows that with each visit she’s going to have to lie in bed for five hours a day,” Rachel Vulgaris said. “To have something out of the norm (happen) that she wasn’t expecting, she was really excited about it.”

National Superhero Day was created by employees of Marvel Comics. To celebrate, the window washers dressed up as Batman, Captain America and Iron Man.

“When kids look outside their windows and see superheroes ‘flying’ to their rooms, it may help take their minds off where they are and being sick,” said Luanne Thomas Ewald, the hospital’s chief operating officer. “We appreciate our superhero window washers and our faculty, nurses and staff whose efforts brought so many smiles to our hospital today.”

While Zoe and the family are huge Marvel fans, her mother said, the No. 1 hero in their household is Wonder Woman from DC Comics.

“I should’ve worn my Wonder Woman dress,” Zoe’s mother recalled her daughter saying. “She was the most excited ever. We had to keep the windows and doors open just in case the superheroes came back. ”

Zoe and other children celebrated throughout the day with hospital staff passing out superhero teddy bears and capes, according to a Michigan Medicine news release. Hospital hallways and units were filled with capes, masks and other superhero gear donned by doctors, nurses, staff, children and families.

“I know as a parent, that’s just something that you’ll never be able to thank somebody enough for,” she said.

Hollywood loved Ann Arbor a decade ago. Here are 10 films shot in the city