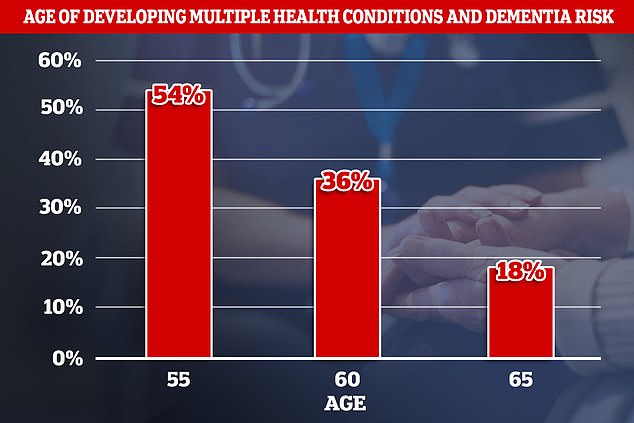 Staying healthy in your 50s may be your best chance of avoiding dementia, a study suggests.

Researchers found middle-aged people with at least two chronic health conditions are twice as likely to be struck down with the memory-robbing disorders.

But the 30-year project also found having three could raise the risk five-fold.

Having more than one of these conditions, known as multi-morbidity, as we get older isn’t unusual.

But the new study, which tracked volunteers over three decades, aimed to explore if having multiple of these conditions earlier in life increases the risk of dementia.

Experts from the University of Paris and Imperial College London analyzed the health records of 10,095 Britons, who were aged between 35-55 when the study began.

Doctors tracked if, and when, the volunteers developed any of 13 health conditions, and if they went on to get dementia. All participants were dementia free when they signed up.

People with multimorbidity before 55 had a two-and-a-half times higher risk of being diagnosed with dementia by the time they were 65, compared to their healthier counterparts.

And for every five-year period people had multimorbidity between the ages of 55 to 70, they had an 18 per cent higher chance of getting dementia, experts calculated.

Researchers estimated that people with three or more chronic conditions at 55 had nearly five times the risk of getting dementia compared to their healthier counterparts.

Researchers calculated that for every five-year period people had multimorbidity between the ages of 55 to 70, they had an 18 per cent higher chance of getting dementia. This would equate to a 54 percent higher risk of dementia if you had multimorbidity for 15 years, with the risk falling if you stayed healthier for longer

Dementia is one of the leading causes of death in the UK, with 900,000 people living with the disorder. The figure is thought to be over 5million in the US.

What were the 13 health conditions the researchers looked at for dementia risk?

The researchers examined the health records of over 10,000 Britons to see if developing multiple chronic health conditions in their 50s increased the risk of getting dementia later in life.

‘Given the lack of effective treatment for dementia and its personal and societal implications, finding targets for dementia prevention is imperative,’ she said.

‘These findings highlight the role of prevention and management of chronic diseases over the course of adulthood to mitigate adverse outcomes in old age.’

British dementia experts said the findings of the study, published in the BMJ, were ‘unsurprising’.

Professor Paul Morgan, a dementia expert based at Cardiff University described the results as ‘interesting’.

However, he added that is was frustrating researchers had not divided the findings based on Alzheimer’s and vascular dementia – the two leading types.

Dementia caused by Alzheimer’s disease is due to the impact of protein build-up in the brain causing cells to die, while vascular dementia is triggered by problems with blood supply to the vital organ.

‘There is abundant evidence that sustained inflammation can cause or accelerate neurodegeneration and anti-inflammatory drugs have been suggested as interventions,’ he said.

‘So, as well as aggressively treating the underling diseases, dampening inflammation in those with multi-morbidities might prevent or delay dementia onset.’

Professor David Curtis, a genetics expert from University College London, also said the findings of the latest research were unsurprising.

‘We know that some forms of dementia are associated with poor health in general so it seems unsurprising that people with especially poor health should be at increased risk of subsequently developing dementia,’ he said.

She also urged anyone with concerns about long-term health conditions and their possible dementia risk to speak to their GP.

‘It is important to properly manage long-term health conditions and people who have concerns about any aspect of their health should speak to their GP.’ she said.

‘We do know that it’s never too early or too late in life to take action on brain health and there are things we can do to reduce our risk of dementia.’

Dr Sancho listed not smoking, drinking in moderations and staying generally fit and healthy with a balanced diet as ways people could keep their brains healthy as they age.

The latest research was an observational study, and therefore, can not prove anything.

However, plethora of studies have shown that having an active and healthy lifestyle can reduce the risk of dementia.

The authors also acknowledged their study has limitations, due to the length of time covered in the study. It means there is a chance some cases were misdiagnosed, and the study group used was likely healthier than the general population.

However, even considering these factors the researchers said they were confident in the study’s findings.

WHAT IS DEMENTIA? THE KILLER DISEASE THAT ROBS SUFFERERS OF THEIR MEMORIES

Dementia is an umbrella term used to describe a range of progressive neurological disorders (those affecting the brain) which impact memory, thinking and behavior.

There are many different types of dementia, of which Alzheimer’s disease is the most common.

Some people may have a combination of types of dementia.

Regardless of which type is diagnosed, each person will experience their dementia in their own unique way.

Dementia is a global concern but it is most often seen in wealthier countries, where people are likely to live into very old age.

HOW MANY PEOPLE ARE AFFECTED?

The Alzheimer’s Society reports there are more than 850,000 people living with dementia in the UK today, of which more than 500,000 have Alzheimer’s.

It is estimated that the number of people living with dementia in the UK by 2025 will rise to over 1 million.

In the US, it’s estimated there are 5.5 million Alzheimer’s sufferers. A similar percentage rise is expected in the coming years.

As a person’s age increases, so does the risk of them developing dementia.

Rates of diagnosis are improving but many people with dementia are thought to still be undiagnosed.

IS THERE A CURE?

Currently there is no cure for dementia.

But new drugs can slow down its progression and the earlier it is spotted the more effective treatments are.