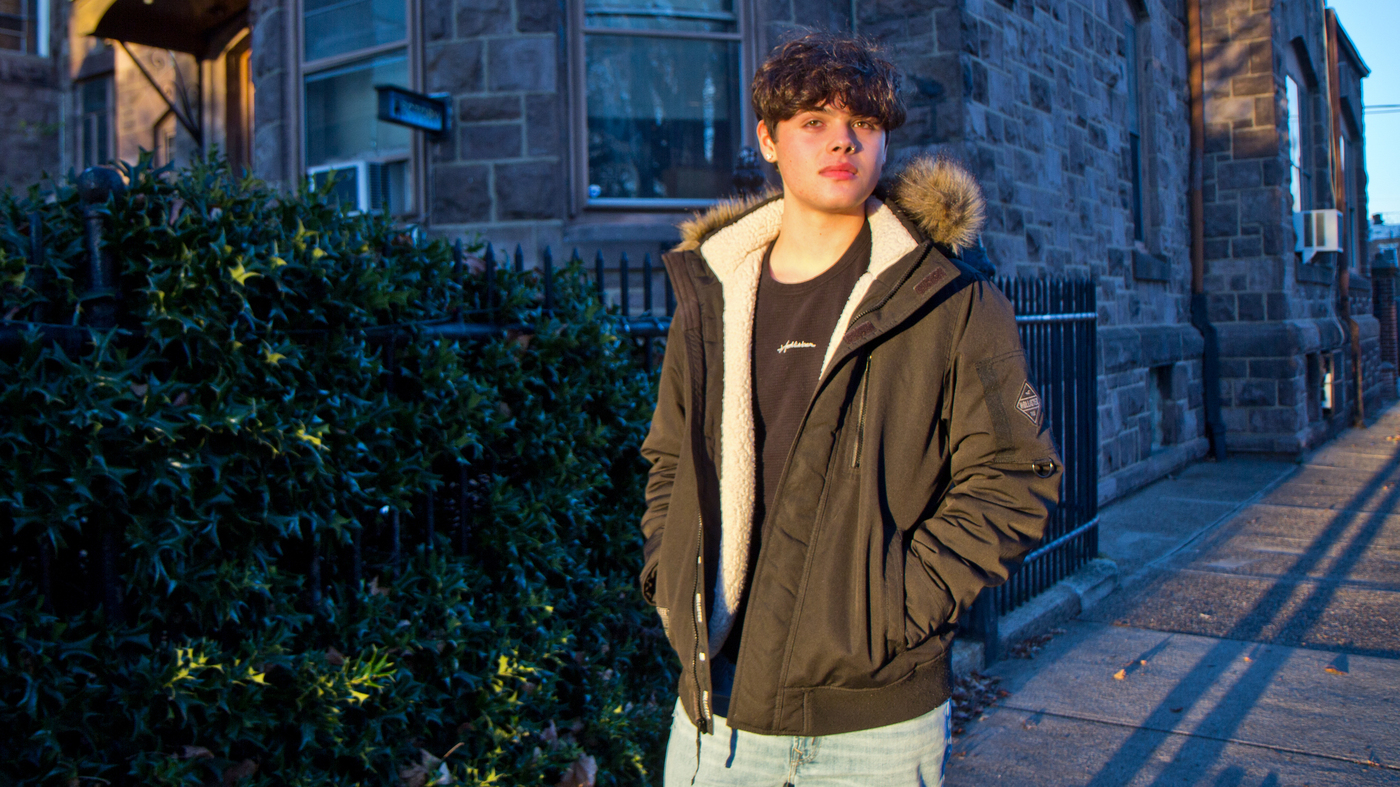 16-year-old Nicolas Montero wanted to get vaccinated but had to hide his plans from his parents, who are opposed to COVID-19 vaccination.

16-year-old Nicolas Montero wanted to get vaccinated but had to hide his plans from his parents, who are opposed to COVID-19 vaccination.

But Montero’s packed schedule is also strategic – he says it’s a way to stay out of the house.

Montero and his parents are separated by a political and cultural rift common throughout the US: He says his parents are part of a small but vocal minority who oppose COVID-19 vaccination and have refused to let him get the shots.

“The thing about these beliefs is that they alternate by the day,” said Montero, who is 16. “It’s not one solid thing that they’re going with, so it’s just really baseless. It’s like one thing they see on Facebook, and then they completely believe it. “

The impasse eventually led to an act of quiet defiance: Montero traveled to Philadelphia, where a little-known city regulation allows children over age 11 to be vaccinated without parental consent.

Not all states require parental consent for vaccination. Alabama allows teenagers 14 and up to consent to their own medical care, including inoculations. In Oregonthe age is 15. Rhode Island and South Carolina allow 16-year-olds to get COVID-19 vaccinations on their own. In Delawareyou need to be only 12 to get vaccines related to sexually transmitted infections (STIs).

That’s the case as well in California, for those 12 or older who would like to get vaccines for STIs. But now California state lawmakers are considering a bill that would allow those minors to consent to all Food and Drug Administration-approved vaccines, including the COVID-19 vaccines.

In Montero’s home state of Pennsylvania, minors can make their own medical decisions in specific circumstances – if they get married, are legally emancipated from their parents, enlist in the military or are pregnant, for example.

A November 2021 Kaiser Family Foundation poll found that 30% of parents with 12- to 17-year-olds said they will definitely not vaccinate their children. In light of this, two National Institutes of Health scholars wrote a piece in The New England Journal of Medicine advocating for states to expand their existing statutes to include COVID-19 vaccines as a medical treatment to which minors can consent.

Montero said he thinks most of his parents’ beliefs about the vaccines come from social media. “I try to explain to them that the vaccines are safe. They’re effective,” said Montero. “I try to explain that we know people that have been vaccinated, even our own family members who’ve been vaccinated for months and experienced no side effects. But nothing seems to get through to them.”

Montero’s parents did not respond to multiple attempts by NPR and WHYY News to speak to them for this report.

Though he was able to find a way to change his own situation, Montero worried about teens who can not travel to a place where the laws are different. So he penned an op-ed in his high school paper, The Playwickianadvocating for the age of consent for vaccines in Pennsylvania to be lowered to 14.

“I know that this is something that teenagers all across the country are experiencing right now,” said Montero.

Last summer after school let out, he did not need to be in the suburbs to go to class, so he asked his aunts if he could come visit them in Philadelphia.

Brittany Kissling, Nico Montero’s aunt, says there’s a divide in their extended family over the issue of COVID-19 vaccination.

“He gets to roam the city, get the city life. He loves that,” said Montero’s aunt, Brittany Kissling, who lives in Philly’s Port Richmond neighborhood. “The kid did not want to leave.”

A week turned into the entire summer.

While Montero was staying in Philadelphia, bouncing between his two aunts’ houses, his friends were getting their first COVID-19 shots. He was worried he might get sick. Worse, he was concerned he might transmit a coronavirus infection to his elderly grandmother.

“My abuela, she’s completely vaccinated, boosted and everything,” said Montero. But he said he was still worried that he could transmit a breakthrough infection.

So he started doing some research. And he found the handful of states that allow teens to get vaccines without parental consent.

To his surprise, Montero discovered that a bill proposing the law be changed in Pennsylvania had been introduced in the state’s House of Representatives. If the measure were to become law, it would mean that anyone age 14 or older could give informed consent to be vaccinated for any vaccine approved by the US Advisory Committee on Immunization Practices.

As his research deepened, he learned that in some other states, minors could get vaccinated without parental consent. He also learned it was legal to do that in the city of Philadelphia.

Philadelphia’s rule came into place in 2007, when the city’s Board of Health passed a regulation that allows anyone age 11 or older to get vaccinated without a parent, provided the young person can give informed consent.

“It can be very difficult, especially for lower-income parents, to get time off work to go to those appointments,” Bettigole said. “These are low-risk interventions. It just makes it easier for parents and families to be able to make sure their kids are vaccinated.”

The regulation also went into effect the year after the FDA approved a three-shot regimen of the human papilloma virus (HPV) vaccine for young people, recommended in the years before they become sexually active.

It is common for states and municipalities to create specific legislation for minors with the aim of increasing access to vaccines that prevent sexually transmitted infections, according to Brian Dean Abramsonan author and adjunct professor of vaccine law at Florida International University’s College of Law.

“The rationale behind this was that you may have children who are being abused and do not want their parents necessarily to be informed of the fact they’re seeking medical interventions for that, or children who may be sexually active and are afraid that their parents will react very negatively to that if they seek some kind of medical treatment. “

In turn, said Abramson, those policies have laid the groundwork for children to get vaccinated in the event of a disagreement like the one between Montero and his parents.

Montero was thrilled to learn of Philadelphia’s regulation. One summer afternoon while his aunt was at work, Montero found a Philadelphia pop-up clinic offering vaccines. He was anxious on his bus ride there – not about needles or side effects, but that his parents would somehow catch him and prevent him from getting his second shot.

He knew his aunts would support him being vaccinated – both of them had been, and Kissling manages a pediatrics office. But he was worried that if his aunts knew, word would get back to his parents. So he did not tell them.

He returned to Bucks County for the start of the school year and arranged for a weekend visit in early September to see his aunts and grandmother again. He planned the trip just in time for his second dose.

“I did feel really liberated when I got my second shot,” Montero said. “I felt like I was protected.”

When Kissling and her sister learned their nephew had gotten vaccinated, they were amazed.

Just before Thanksgiving, Montero’s parents found out. They reacted the way Montero and his aunts worried they would: Kissling said Montero’s mother blamed her and her sister for influencing her son and for being neglectful enough to allow him to get vaccinated. The tension has grown to the point where Montero can not even speak to his parents.

Kissling said her family would rarely even discuss politics until recently. Now, though, she said, it’s hard for the whole family to spend time together. She has left in the middle of dinners to drive back home to Philadelphia because the discussions have gotten so heated. She’s not expecting a resolution anytime soon – her family is one that’s more likely to sweep conflict under the rug than resolve it, she said.

“Now, there’s a divide,” Kissling said. “It’s sad because at the end of the day, family should be family.”

16-year-old Nico Montero wrote an op-ed about getting vaccinated for his school’s newspaper.

16-year-old Nico Montero wrote an op-ed about getting vaccinated for his school’s newspaper.

To cope with the tension at home, Montero has doubled down on his extracurriculars: He’s learning to pole vault for the track team. He joined the school paper, on top of world language and environmental action clubs.

Each evening after school, he lays claim to one of the private rooms at the public library, where he spreads out his books across a small desk and diligently does his homework. Recently, he was working on a paper about the history of US involvement in Puerto Rico, where his grandmother is from. He was reading a thick book on the Puerto Rican independence movement.

“When I started reading this book, like almost every single page, my mouth is just wide open,” said Montero. “Like, I could not believe that these things happened to my people.”

He hopes to visit the island one day and is learning to cook Puerto Rican dishes from his grandmother in the meantime, which he can now do without constantly worrying that he might infect her.

Montero has ambitions to go to college in Washington, DC From there, he said, he wants to go to law school.

Kissling says she’s inspired by her nephew’s independence. But she knows he’s still a kid who needs support and guidance. That’s why she tries to stay in touch with him every day: texting, joking, asking him what he wanted for Christmas. (She expected AirPods or Amazon gift cards. Instead, he sent her a wish list of more history books about Puerto Rico.)

“He plays it off with a smile, and he laughs about it, and he says, ‘Aunt Britt, it’s just giving me more motivation to do what I need to do and get where I want to get,'” Kissling said of her nephew’s fraught relationship with his parents. “But deep down, I know it has to affect him. I’m 34. It would affect me.”