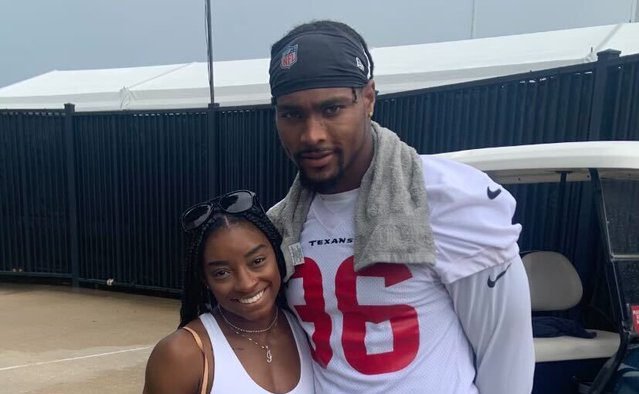 Simone Biles is one of the most decorated gymnasts in the sport’s history, with 25 World Championship medals. She took the sport of gymnastics to a different height. A gymnast with an incredible competitive spirit and training discipline, she established unparalleled dominance in the sport.

Simone Biles is an inspiration to people all over the world. Her fans are always curious to know about any recent developments in her life. She took the internet by storm when she announced her engagement to NFL player Jonathan Owen in 2022.

Simone Biles and Jonathan Owens began dating in March 2020. However, they made their relationship official on Instagram in August 2020. Since then, they have been sharing photos on their social media platforms. The fans deemed them couple goals and loved all their public appearances together. Simone revealed in multiple interviews how Jonathan has been her biggest support system.

In an interview with Uninterrupted, Simone talked about the financial part of her life. She revealed that she is still getting used to the idea of ​​investing. Simone had been talking to financial advisors to educate herself about investing money. Simone revealed her fiancé had given her valuable advice regarding the same.

Speaking on Jonathan’s advice, who was her boyfriend back then, she said, “My boyfriend always tells me, ‘Pay more attention in those meetings!’ Because I walk out of it, and he says, so how was it?’ And I say, ‘Oh, I just ask them if I’m broke or not.'”

Simone and Jonathan seem to be a match made in heaven. The chemistry between them during their public appearances made fans curious to know more about their relationship. Simone and Jonathan met for the first time on a celebrity dating app. Owens revealed that he did not know who Simone was, as he was not a regular gymnastics viewer. They got to talking and clicked instantly. After a few meetings, the couple began dating. However, they announced it to the world a few months later.

Owens extended his support to Simone when she was struggling during the Tokyo Olympics. He even revealed in an interview that Simone’s work ethic motivates him to work harder. In February 2022, they announced their engagement on their social media accounts. She captioned her post, “Woke up this morning with a fiancée.”

Watch This Story: Classy and Elegant: Simone Biles Drops Hints On Her Wedding With Jonathan Owens

Fans await the couple’s 2023 wedding and Simone’s return to gymnastics.