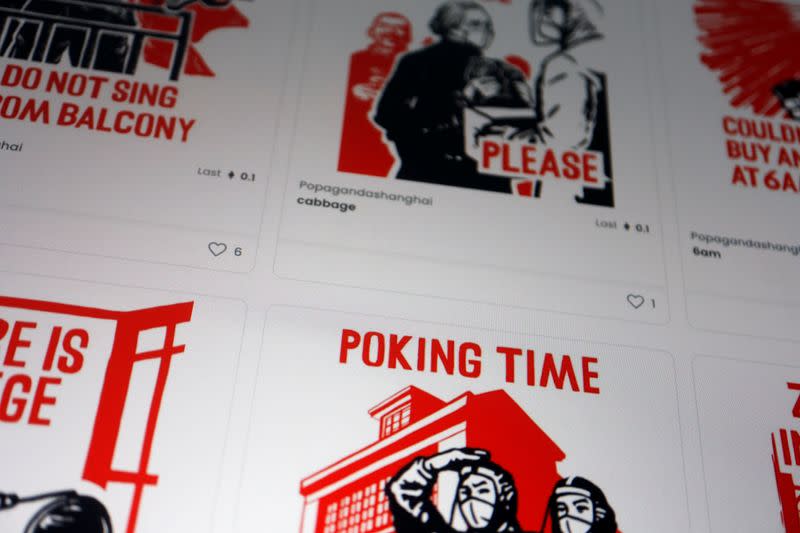 HONG KONG (Reuters) – Shanghai residents are turning to the blockchain to preserve memories of the city’s month-long COVID-19 lockdown, minting videos, photos and artworks capturing their ordeal as non-fungible tokens to ensure they can be shared and avoid deletion .

Unable to leave their homes for weeks at a time, many of the city’s 25 million residents have been unleashing their frustrations online, venting about draconian lockdown curbs and difficulties procuring food, and sharing stories of hardship, such as patients unable to get medical treatment.

That has intensified the cat-and-mouse game with Chinese censors, which have vowed to step up policing the internet and group chats to prevent what they describe as rumors and efforts to stoke discord over seething public frustration with the lockdown.

While some people have defiantly continued reposting such content, others are turning to NFT marketplaces like the world’s largest, OpenSea, where users can mint content and buy or sell it using cryptocurrencies, attracted in part by the fact that data recorded on the blockchain is unerasable .

The height of Shanghai’s lockdown minting moment is rooted in April 22, when netizens battled censors overnight to share a six-minute video entitled “The Voice of April”, a montage of voices recorded over the course of the Shanghai outbreak.

On April 23, a Chinese Twitter user with the handle imFong said in a widely retweeted post, “I have minted the ‘Voice of April’ video into an NFT and have frozen its metadata. This video will exist forever on the IPFS,” referring to the interplanetary file system, a type of distributed network.

A Shanghai-based programmer told Reuters that he was among those in the city who viewed their effort to keep the video alive as part of a “people’s rebellion”.

He has himself minted an NFT based on a screenshot of Shanghai’s COVID lockdown map, showing how most of the city has been sealed off from the outside world.

“Being stuck at home because of the outbreak leaves me a lot of time,” he said, speaking on the condition of anoymity.

Other Shanghai content available on OpenSea as NFTs for sale includes Weibo posts containing complaints about the curbs, images from inside quarantine centers, and works of art inspired by life under lockdown.

Simon Fong, a 49-year-old freelance designer from Malaysia who has been living in Shanghai for nine years, began creating satirical illustrations on life under lockdown in the style of Mao-era propaganda posters.

He started minting them into NFTs, having dabbled in the market since late last year, and has now managed to sell nine of his works for an average price of 0.1 ether ($ 290)

His pieces include scenes dramatizing PCR testing, as well as residents’ demands for government rations.

“I chose the Mao-era propaganda style for these pieces because some people are saying that the lockdown situation is taking Shanghai backward,” Fong said.

While China has banned cryptocurrency trading, it sees the blockchain as a promising technology and NFTs have been gaining traction in the country, embraced by state media outlets and even tech companies including Ant Group and Tencent Holdings.

The protracted lockdown in Shanghai, China’s financial hub, is part of Beijing’s controversial zero-COVID strategy, a policy which has growing risks to its economy https://www.reuters.com/world/china/china-struggles-options-covid -threatens-economic-goals-2022-04-28.

The COVID outbreak in Shanghai, which began in March, has been China’s worst since the early months of the pandemic in 2020. Hundreds of thousands have been infected in the city.