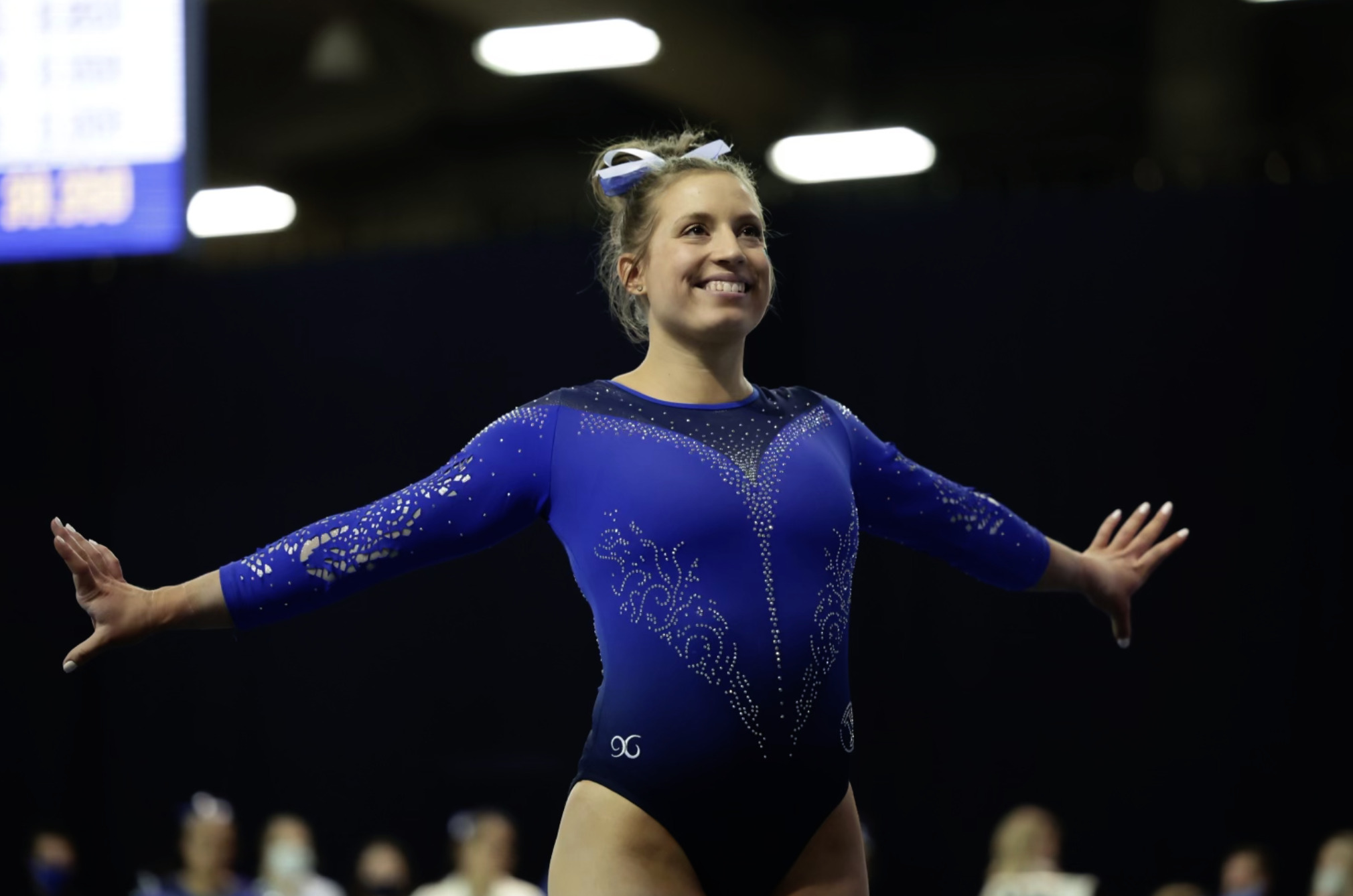 Receiving conference gymnast of the week is an honor in and of itself but to receive it six consecutive weeks is a feat that proves complete domination. BYU’s Sadie Miner-Van Tassell has done just that.

Miner-Van Tassell is one of the powerhouses of the BYU women’s gymnastics team and has made her mark in her senior year. She was recognized by Mountain Rim Gymnastics Conference as the gymnast of the week for the sixth consecutive week after another career-high score of 39,525 against Southern Utah on Feb. 18.

With stellar scores and an ever-growing resume, it’s clear to see the future is bright for Miner-Van Tassell, but the road to success has not been easy for the gymnastics star.

Miner-Van Tassel arrived at BYU as a freshman in a sling after a shoulder surgery that took place in May 2018. After a year of recovery, she started her sophomore year in 2020 with high hopes, and although her shoulder was not strong enough to compete on bars, she was excited to compete in the other events.

The only thing that could stop her? A worldwide pandemic.

Cutting the 2020 season short, including the loss of senior night and the MRGC Championship, COVID-19 created a serious roadblock in the middle of what was shaping up to be a big season for Miner-Van Tassell.

After months of quarantining, contact tracing and a series of protocols, the 2021 season was set to begin. Unfortunately, increasing hip pain, testing positive for COVID-19 and a rolled ankle presented a series of challenges for the gymnast’s routines. The few things Miner-Van Tassell could still compete in were lost just three weeks into the season when a serious rolled right ankle ended her junior year.

Miner-Van Tassell started dating her now-husband around that time, who originally planned to wrestle at UVU but switched to Nebraska after his mission. Committing to a long-distance relationship was just one more piece added to her busy life.

“Honestly, I was not always this resilient. I was about ready to walk away from it all at the end of last season, ”Miner-Van Tassell said. “I had kind of just had enough of it. My body was not working the way I wanted it to, I was living away from my boyfriend at the time. I just wasn’t, you know, really happy with my circumstances. ”

It was during this time that Miner-Van Tassell approached coach Brogan Evanson to discuss all her options on the table. Evanson, having been in a long-distance relationship herself, helped remind Miner-Van Tassell of her goals and helped create a plan to accomplish them.

Miner-Van Tassell worked with her coaches to create a system in which she could travel to Nebraska for a couple of days, return to practice, then compete. Additional visits have presented themselves, including a gymnastics meet in Nebraska where Miner-Van Tassell had the chance to perform in front of her husband for the very first time.

Despite the years of ups and downs, BYU head coach Guard Young credits Miner-Van Tassell’s perseverance to her strong-willed personality.

“Any accomplished athlete, any accomplished person in any field probably has some stubbornness to them,” Young said. “So she’s a little bit stubborn which is a good thing at some times. She’s just an unbelievable competitor, she does not let things get to her. ”

Miner-Van Tassell has also been a key to BYU’s unity as a team. Earlier this year, the coaching staff made the decision to invite gymnasts to volunteer for leadership roles rather than voting on captains. Young noted that Miner-Van Tassell was one of those to step up, and eventually took on the role of vault captain.

“You put that in the context of what these kids have had to deal with for the past three years and it’s made them very tough, they’s just tough kids. They’re very resilient, they’re very adaptable, ”Young said. “I mean we just throw things at them and they can adapt and that’s a trait that I haven’t seen in college players in a while.”

It’s no wonder Young describes Miner-Van Tassell as a “rock” of the team’s success of the season after the adversity she has gone through. Yet, for Miner-Van Tassell, it’s not about the praise or recognition, she just wants to be there for her team.

“One of my goals was to be 100% consistent,” Miner-Van Tassell said. “To just know that my team can count on me.”