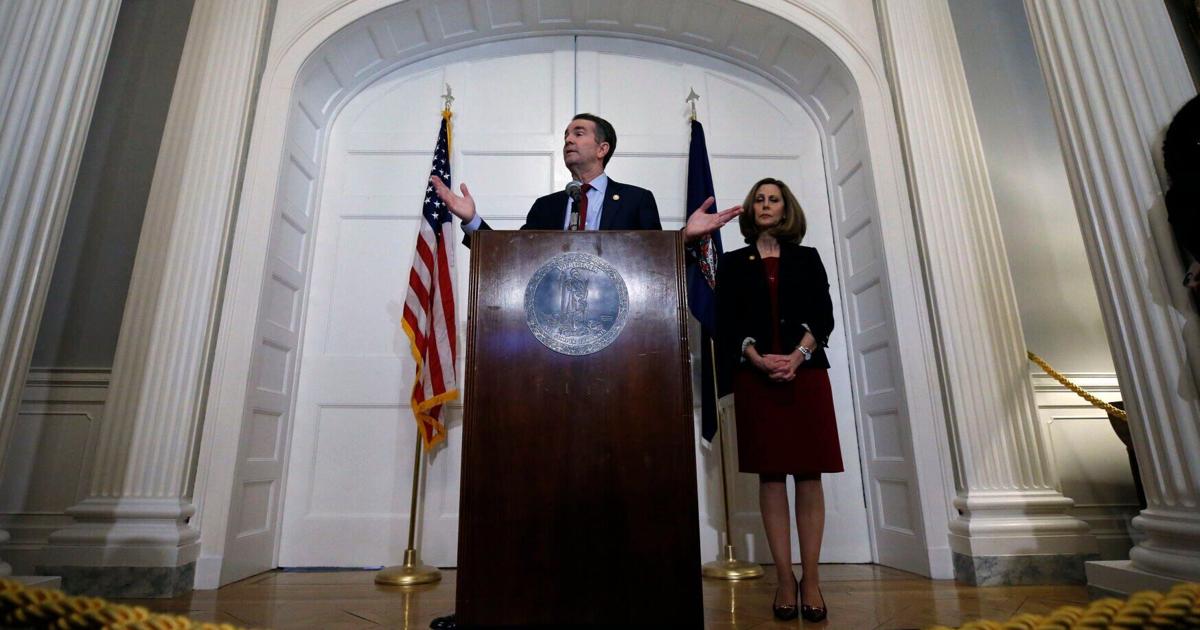 use Bob Gibson sig and photo

No Virginia governor during the past 50 years endured the rollercoaster of redemption that took Ralph Northam from disgrace in 2019 to new horizons of racial understanding and support three years later.

Northam’s redemption through rebuilding his reputation by dealing with Virginia’s fraught history of race relations is told in a new book that examines racial progress and other factors that changed the state’s political leanings.

David Toscano, who served as House of Delegates Minority Leader prior to his retirement at the end of 2019, traces years of the state’s political transformation from mostly Republican in 2005 into a “Bellwether,” the title of his book that cogently explains Virginia’s role as an indicator of national change.

Tuscany treats Northam’s redemption as part of Virginia’s unique racial history in which Black residents fought in courts and elections to overcome paternalistic racism. In other states, more abject terror was used to subjugate people of color.

Northam in February of 2019 faced the startling revelation that his 1984 medical college yearbook page featured a photo of characters in blackface and wearing a Ku Klux Klan hood. Northam could not recall or explain the photo and was met with immediate calls for his resignation.

Instead of resigning, the soft-spoken governor began an extended listening tour and relied on support from Virginia’s Legislative Black Caucus. He shifted the focus of his governorship to deal with minority concerns about civil rights and disparities in medical and other treatment of minorities.

One change in his 2020 budget allowed Northam, a physician later widely praised for Virginia’s response to the COVID pandemic, to include new funding to attack maternal mortality disparities among people of color.

“Northam’s actions solidified his strong support among African Americans across the state,” said Toscano, who noted that the Black caucus, unlike most leading Democrats, himself included, never officially called on the governor to resign.

Luck, and timing, still mean a lot to individuals in politics. The Legislative Black Caucus stuck by the governor and – within a week of the photo being leaked in the media – newly disclosed scandals involving his lieutenant governor and attorney general quickly intervened and created political succession difficulties.

Larry Sabato, founding director of the University of Virginia’s Center for Politics, said Northam was saved by two developments: that Lt. Gov. Justin Fairfax had been accused of sexual harassment by two women, and Attorney General Mark Herring, next in line after Fairfax, revealed he had worn blackface at a party during his undergrad days at UVA in the early 1980s.

“If they all resigned, Republican Speaker of the House Kirk Cox would have become governor,” Sabato noted. “Simultaneously, Northam began to implement a redemption strategy. He would dedicate the rest of his governorship to helping right the many racial wrongs in Virginia. ”

Delegate Sally Hudson, a fellow Democrat who won Tuscany’s seat in 2019, said of Northam, “No one can deny he presided over extraordinary strides in Virginia history. I credit the Legislative Black Caucus for charting the course and Governor Northam for having the courage to follow. ”

“His leadership is sorely missed,” Hudson added of the governor, who left office in January after being termed limited by Virginia’s unique constitutional ban on direct succession.

Toscano and others believe that Northam is not one of the two figures in the yearbook, one wearing blackface and the other a Klan hood. Northam apparently knows who the man in blackface and the hooded figure, possibly a woman, are and chooses not to reveal their identities.

Sabato said he does not know who was in that photo. “We were promised an answer and never got it. It’s legitimate to point that out. Somebody knows the truth. Maybe a bunch of somebodies. ”

Toscano’s book discusses many other facets of Virginia’s racial history, including the nearly century-old origins of the state’s political exceptionalism nickname for doing things: “The Virginia Way,” which means many things to different folks.

The term as it was used in the 1930s meant that if whites were civil in dealings with African Americans, then all Virginians would be more likely to maintain racial separation based on consent, Toscano said.

He advocates a bold new “Virginia Way” that would include all residents and get people of different backgrounds and experiences into the room where decisions are made.

Toscano’s book makes a strong case that the “Virginia Way” should be to strengthen the state’s resolve to learn from its racial history and place more chairs at the table.

Get opinion pieces, letters and editorials sent directly to your inbox weekly!