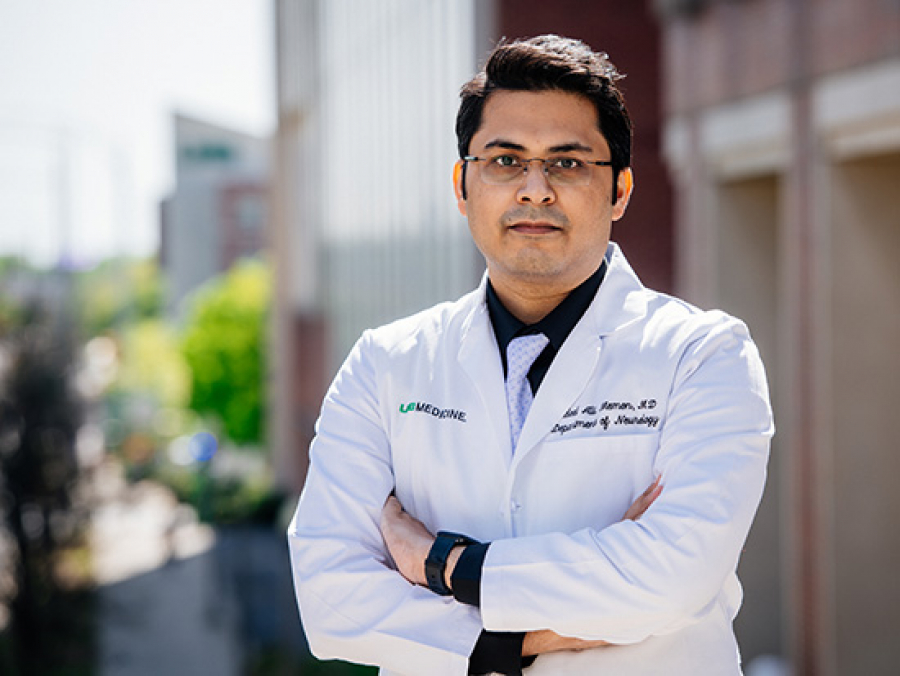 Adeel Memon will be the first graduate of the UAB neuroengineering Ph.D. program during the 2022 spring graduate commencement ceremony on April 29.

Adeel Memon had everything worked out.

The son of a dermatologist in Karachi, Pakistan’s largest city, Memon was intent on earning the same prestigious scholarship to medical school that his father had won, becoming a dermatologist himself and joining his father’s practice. “The plan was to follow in his footsteps,” Memon said.

Memon got the scholarship, but then his father was diagnosed with Parkinson’s disease. Not coincidentally, Memon found his medical interests shifting to neurology and specifically to movement disorders, the subspecialty focused on treating conditions such as Parkinson’s, dystonia and tremor.

After graduating from Dow Medical College in Karachi and finding inspiration in a TED talk about deep brain stimulation to treat Parkinson’s, Memon started down a new path. That led him to a neurology residency and movement disorders fellowship at the University of Alabama at Birmingham – and, thanks to hard work and invaluable mentors, a place on the leading edge of developing brain-computer interfaces to treat neurological conditions.

At UAB’s spring graduate commencement ceremony on April 29, Memon will add a Ph.D. to his MD as the first graduate of UAB’s doctoral program in neuroengineering. This joint program of the Marnix E. Heersink School of Medicine and School of Engineering is the only such program in Alabama and one of a handful available nationwide. But that is not Memon’s only first at UAB. He is also the nation’s first recipient of a highly competitive combined R25 / Ph.D. scholarship trainee award from the National Institute of Neurological Disorders and Stroke, supporting medical residents and fellows who want to become clinician-scientists.

In early March, Memon successfully defended his dissertation, in which he identified a correlation between cognitive impairment and three specific neural signatures in brain waves from patients with Parkinson’s disease. This summer, he will join the Department of Neurology at West Virginia University as an assistant professor. He will also start his research lab at the university’s Rockefeller Neuroscience Institute, which will be focused on “applying computations to study circuit dysfunction in movement disorders,” he said.

Learn how to start your Blazer journey, here.

“We are so excited about Adeel’s being our first graduate,” said Lynn Dobrunz, Ph.D., professor in the UAB Department of Neurobiology and co-director of the neuroengineering Ph.D. program. “He has accomplished so much, and the work he is doing is a perfect fit with our program.”

Neuroengineering broadly defined is the application of computational and engineering techniques to problems in neuroscience, neurology and neurosurgery, Dobrunz explains. “It is highly quantitative and computational – the kind of analysis a typical neurologist would not know how to do,” she said. “There is such a need for people with this training.”

Memon credits Amara, McMahon and Irwin – and the new neuroengineering doctoral program – with allowing him to fulfill his goal.

Award winner plans his next steps

While training at UAB, Memon demonstrated excellence in each of the four pillars of academic medicine, Dobrunz notes.

“He twice won awards for excellence in medical student teaching and was honored as the best resident in the neurology consult service,” she said. “After being inspired by Dr. McMahon’s leadership skills, he has continued to serve as a leader and is currently serving on the Executive Board of the Pakistan International Neuroscience Society. ”

Now, as Memon begins his lab at the Rockefeller Institute, he will continue to study the brain signatures he identified in his dissertation. They could eventually become an early warning sign to help clinicians identify patients at risk for cognitive decline, he says.

It may also be possible to alter these brain waves through non-invasive techniques such as transcranial direct current stimulation, Memon says. He plans to apply for an NIH K award, proposing “to design experiments where we would be blocking or enhancing the spindle [wave] in those signatures to see if there is a causative relationship between those markers and cognition, ”Memon said. “The hypothesis would be that if you enhance the spindle there would be improvement in cognitive performance in patients with Parkinson’s disease.”