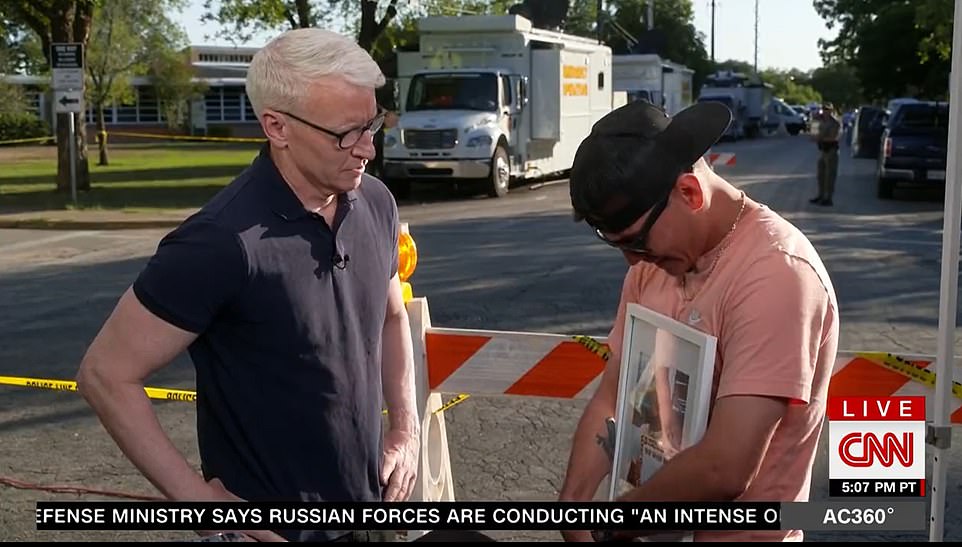 When Angel Garza arrived at the scene of the Texas school shooting, his first instinct was to help. A trained medic, he approached a 10-year-old girl who had just emerged from the building covered head to toe in blood and asked her where she was hurt.

The girl explained she wasn’t hurt – the blood was from her best friend who was shot dead next to her while trying to call 911. Angel asked her for her friend’s name. She replied: ‘Amerie.’ It was then that Angel realized the blood he was looking at came from his own daughter, and that she was one of 19 children killed in the massacre.

Through sobs of grief, Angel said Amerie had just celebrated her 10th birthday and had got a new cell phone – the one she used to try and call the cops as 18-year-old Salvador Ramos stormed into the school armed with a legally-purchased AR-15 rifle, which he turned on the fourth-grade class and their teachers.

‘She was just trying to call authorities and I guess he just shot her. How do you look at this girl and shoot her? Oh, my baby. How do you shoot my baby?’ Garza said. ‘I just want people to know that she died trying to save her classmates. She just wanted to save everyone.’

In 90 minutes of terror that began around 11.30am Tuesday, Ramos shot dead Amerie and 18 of her classmates – all aged under 11 – along with two of their teachers: Irma Garcia, 46, and Eva Mireles, 44. All of the dead came from a single classroom where Ramos barricaded himself before being shot dead by a Border Force agent around 1pm.

Angel Garza, whose ten year old daughter Amerie was murdered, holding her photo to his heart:

“How do you look at this girl and shoot her? Oh, my baby. How do you shoot my baby?” pic.twitter.com/TKGDp81Pze

Angel Garza wept outside Robb Elementary School in Uvalde, Texas, as he told Anderson Cooper of the horrifying moment he found out his daughter was dead – while trying to provide medical assistance to a 10-year-old covered in the girl’s blood

Amerie, who had just celebrated her tenth birthday, used her new cell phone to call 911 during the massacre but was shot dead while sitting next to her best friend

Angel Garza, pictured with Amerie in an undated photo, told CNN on Wednesday: ‘How do you look at this girl and shoot her? Oh, my baby. How do you shoot my baby?’

Her mother, Kimberly Garcia, took to Facebook to address the family’s loss, saying it is incomprehensible

‘She listened to her mom and dad, she always brushed her teeth, she was creative, she made things for us, she never got in trouble in school.’

At an end-of-year awards ceremony just hours before she was shot and killed, Amerie had been named to the school’s honor roll.

The 10-year-old was also a beloved big sister, whose little brother is heartbroken by her death.

‘We informed him that his sister is with God and that she will no longer be with us and of course he just cried,’ Garza said when asked if Amerie’s brother knew she was dead.

Her mother, Kimberly Garcia, took to Facebook to address the family’s loss, saying it is incomprehensible.

‘Mommy loves you, mommy can’t sleep without you Mommy needs you, Amerie I can’t do this life without you. How am I supposed to live life without you? I will never understand. I love you and I’ll never be the same, ever again,’ Garcia penned.

In another post, she added: ‘My heart is completely shattered.’

Similarly to Garza, Texas sheriff’s deputy Felix Rubio was responding to Tuesday’s school massacre was told his daughter was among the victims.

Felix Rubio was snapped clutching his wife Kimberly for support in Uvalde on discovering their beloved daughter Lexi, 10, was among 19 children murdered at Robb Elementary School by shooter Salvador Ramos.

Felix Rubio attempted to console his wife as the horror unfolded on May 24 after learning the couple’s daughter Lexi, 10, was among 19 children brutally murdered while at school

In a separate interview, Felix said that his daughter was going to be an all-star softball player

The pain was clearly etched in Rubio’s face as he tried to comfort his wife. Even more heartbreakingly, he’d posed proudly with Lexi just hours before her death.

She had received a certificate for making the honor roll at Robb, and beamed proudly with her parents for a photo that was to be the last snap ever taken of them.

At the ceremony, Lexi made the All-A honor roll and won the school’s good citizen award, her mother, Kimberly, wrote in a Facebook post.

Kimberly spoke about her final interaction with her daughter saying: ‘We told her we loved her and would pick her up after school. We had not idea this was goodbye.’

Felix also spoke to CNN while in extreme visible distress Wednesday, and called for gun control measures to try and prevent other parents suffering losses like his.

During a press conference following the shooting, Texas Governor Gregg Abbott confirmed that a sheriff’s deputy had lost a child at Robb Elementary School.

In a live interview with CNN the day after the attack, Felix said through tears: ‘I’ve had enough with guns. I don’t want my daughter’s name to be just another name.’

When asked what issues he would like to see resolved following the shooting, Felix said: ‘Violence, guns. I’m a cop. I’m a deputy here in Uvalde County. This is enough.’

Salvador Ramos legally purchased two AR-15 style rifles (right) including the one he used in yesterday’s attack after his 18th birthday last week. The gunman also bought more than 300 rounds of ammunition

The grieving parents later told CNN via text message that their daughter was ‘kind, sweet, and appreciated life. She was going to be an all-star in softball and had a bright future whether it’s sports or academic. Please let the world know we miss our baby.’

In response to Lexi’s tragic death, her aunt set up a GoFundMe page to help her parents in their time of need.

Department of Public Safety Lt. Christopher Olivarez told CNN that the shooter barricade himself inside of a single classroom, and that it is inside that classroom where most or all of the 19 children and two teachers were killed.

Police and state troopers arrived in time to hear gunshots inside a classroom where the man barricaded himself and began shooting children and teachers.

Shortly before the shooting unfolded, an awards ceremony was held for students at Rabb Elementary. At the ceremony, Lexi won the good citizen prize and was named to the honor roll

Lexi’s mother wrote in a Facebook post: ‘My sweet Lexi. Love of my life. Keeper of my soul. I carried you inside me. I’m you. You are me. I want to be with you. Now. Not later’

The unnamed agent who shot and killed Ramos is believed to be from the Border Patrol Tactical Unit (BORTAC), which has specialized agents dispersed throughout the United States.

The BORTAC agent, whose identity has not yet been revealed, rushed into the school without waiting for backup.

Ramos was behind a barricade, returning fire, but the border patrol agent managed to shoot and kill the gunman before he could claim more victims.

‘They came in from opposite sides. The BORTAC agent ended up exchanging gunfire with the shooter, killed the shooter, and I am told that the agent was injured in his leg,’ reported Fox News.

‘They are trying to figure out if he was shot in the leg or hit by shrapnel.’

In an interview with KENS5, a survivor of the tragedy said: ‘When the cops came, the cop said: ‘Yell if you need help!’ And one of the persons in my class said ‘help.’ The guy overheard and he came in and shot her,’ the boy said. ‘The cop barged into that classroom. The guy shot at the cop. And the cops started shooting.’

That child credited the deceased teachers, Irma Garcia and Eva Mireles, with saving his life. He said: ‘They were nice teachers. They went in front of my classmates to help. To save them.’

According to a Facebook post from the Uvalde County Sheriff’s Office in April 2018, Felix completed a week long active shooter training course that month alongside a fellow deputy.

The post read in part: ‘We never hope for situations where this type of training is needed, but we will always train to be prepared for the worst scenarios.’

At the beginning of May 2022, Kimberly received an award in leadership from St. Mary’s University in San Antonio. While in March 2022, Kimberly was the recipient of the 2022 Alice Franzke Non-Traditional Student Scholarship Award at the school.

In a profile on St. Mary’s website, Kimberly is described as pursuing a history degree. She is referred to as an award-winning journalist, having won prizes with South Texas Press Association for work as a reporter and editor with the Uvalde Leader-News.

The shooting at Robb Elementary in Uvalde, Texas left 19 students and two teachers dead. Here are the victims that have been identified so far:

Uziyah Garcia, nine, (left) and Makenna Elrod, 10, (right) were both confirmed dead by loved ones on Facebook

Xavier Lopez, 10, (left) and Eliahana Torres, 10, (right) was also killed at the school shooting on Tuesday

Ellie Lugo (left) and Nevaeh Bravo (right) were also killed. Ellie was reported as missing for several hours before her parents confirmed her death

Alexandria Aniyah Rubio – who was better known to friends as ‘Lexi’ (left) – was confirmed dead just before midnight on Tuesday. Maite Yuleana (right) was also confirmed dead, having taken a photo with her honor roll certificate just hours before

Jose Flores, 10, was also killed in the shooting hours after attending the honor roll ceremony, where he was pictured clutching his certificate (above)

Irma Garcia (left) and Eva Mireles (right), who co-taught fourth grade, were both shot and killed at Robb Elementary School on Tuesday