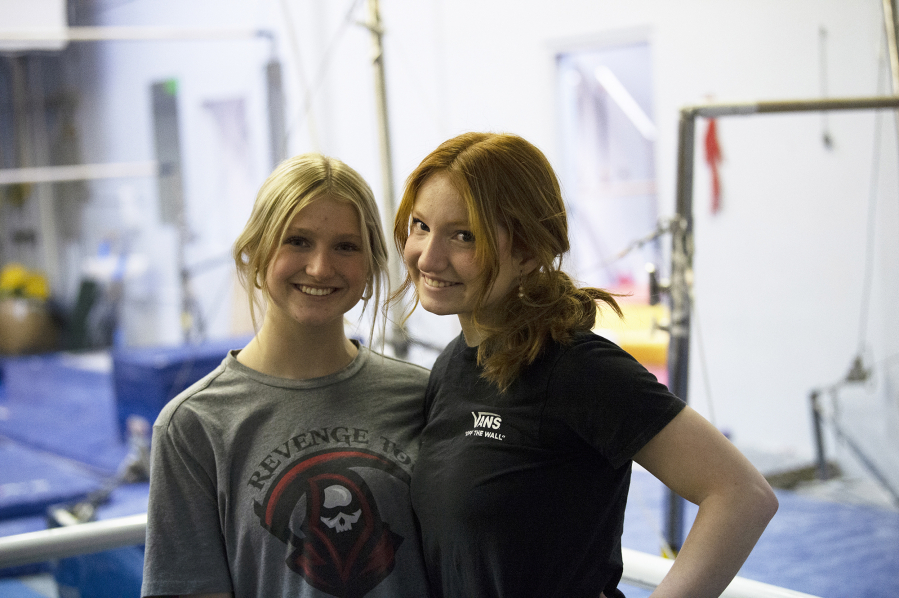 The Camas gymnastics teams like to think of itself as a big family.

And at the center of that unit are two team members who are part of an actual family.

Senior Peyton Cody and her younger sister, sophomore Kennedy Cody, believe their closeness permeates throughout the Papermakers and helps feed the team’s success.

“Everybody who’s on the team, we’re all super close,” Peyton Cody said. “And I think it’s fun that me and Kennedy are sisters, because we get each other, and then we spread that feeling to other girls on the team.”

Peyton Cody has been competing in gymnastics for 11 years, and Kennedy for eight years. But their bond goes beyond a love for gymnastics.

“Socially, me and Peyton are really close,” Kennedy Cody said. “We’ve been best friends forever. She has different friends than I do, and I’m really close to other people. So I think we help bring the whole team together. ”

The Cody sisters also hope to bridge a gap created by the pandemic that will help the Papermakers secure a fourth consecutive 4A team title at the state meet Saturday at Sammamish High School in Bellevue.

Peyton Cody was a key contributor to Camas’ victories in 2019 and 2020, placing eighth in the all-around as a freshman and ninth as a sophomore.

“It’s really exciting to be able to help the team because there are a lot of kids who are sophomores who did not get to go last year but were still on the team or who are freshmen now,” Peyton said. “They’re all going for the first time. It’s really exciting to prepare them, like Kennedy, to get ready for state and help them know what’s going to happen and how it’s going to be. ”

Kennedy was one of those freshmen last year who did not get a chance to go to the state meet as it was canceled by COVID protocols.

“I’m really excited,” Kennedy said. “I feel like our team is turning into more of a family. We’ve gotten really close. And I think winning a state title will really help build that bond. ”

Camas is coming off a team win over Sumner at the bi-district meet at Puyallup in last week.

The 4A state meet will have a new look. In previous years, the team champion and the all-around champion were crowned on the first day of the meet, which also served as a qualifier for individual apparatus finals that were held the following day.

This year, those individual titles will be determined during competition for the team scores. And that suits Peyton Cody just fine. She placed fifth on the bars as a freshman.

“I’m actually happy that we do not have to come back the next day for the (individual) finals,” Peyton said. “I made it to finals both of the years that I did it, and it feels like an extra thing that is not necessary. Because we’re all there for the team and not really for ourselves. So I’m kind of happy we’re doing it the way we’re doing it this year. We just give our best for the team, and that’s it. ”

Peyton Cody and other returning state participants on the Camas team have been telling their younger teammates what to expect at state and how to cope with the pressure.

And the younger athletes, like Kennedy Cody, are hoping to take that advice and build from it, as the Papermakers look to continue their dynasty.

“I think it’s going to be a lot of fun,” Kennedy said. “I’m just going to try to have fun and do my best. And I just hope everyone else feels that way too. I think there is a lot of pressure, but I think we’ll be able to work through that. ”

Tim Martinez is the assistant sports editor / prep coordinator for The Columbian. He can be reached at 360-735-4538, tim.martinez@columbian.com or follow his Twitter handle @ 360TMart.