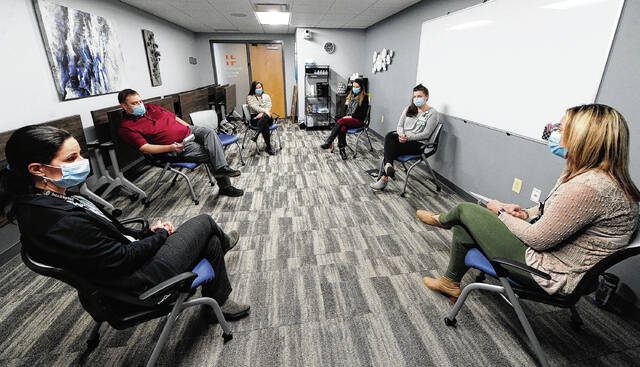 HANCOCK COUNTY – A mental health initiative with the goal of helping individuals while improving public safety is getting a big boost.

Officials have committed $ 5 million in federal funds to back it over the next several years, a span they plan to use gathering data to help determine the program’s long-term future.

Part of the initiative seeks to reach those making their way through the county’s justice system and reduce the challenges they may face toward accessing mental health and substance use treatment.

The other part will create a group of mental health professionals able to respond directly to someone in the community experiencing a mental health crisis.

A committee of county health and justice system leaders have spent nearly a year developing the effort, called the Healthy Community Response Collaborative.

Hancock County already budgeted for two new employees, called navigators, at its jail this year. Part of those social services professionals’ responsibilities will be to meet with inmates to understand any mental health and substance use disorder needs while guiding them toward services that will help them.

But what about when they leave incarceration, and those who are at other points in the county’s justice system? Now, they’ll have access to that same kind of navigation to help them manage, support and overcome barriers in the areas of mental health, addiction and other social needs associated with those challenges.

The Healthy Community Response Collaborative team envisioned how the initiative could best roll out over the next several years. For the external navigation component, the group anticipates adding four navigators over a period of time, as well as front office staff. Navigators will interact with those they help mainly by phone and virtually. They’ll be based at the Healthy365 Connection Center in Greenfield, where Everidge currently leads a team of two navigators with backgrounds in social work providing navigation services to the general public. Because of that existing infrastructure, the additional navigation service for those involved with the justice system could launch fairly quickly, Everidge said.

The initiative also includes a mobile response team through Indianapolis-based Community Behavioral Health, which would include up to six community health workers. Those workers would be able to respond to needs in the community, including joining law enforcement on emergency calls involving mental health matters when it’s safe to do so. Once on scene, a worker would assess the individual, evaluate their needs and connect them with the right support. If a call comes in outside of the team’s working hours or a member is unable to respond immediately, the goal would be to make contact with the individual in need of help within 48 hours.

Devon Jones of Community Behavioral Health said the organization already has contracts executed with organizations it would partner with to get the mobile response team up and running, which he added could be accomplished within three months.

The initiative calls for a psychiatric nurse practitioner as well.

“We felt it was super important, as we are supporting individuals coming out of the justice system particularly, that they are able to obtain their medications as fast as possible and have that medical support,” Everidge said.

“The sooner we can get you your funding, the better,” County Commissioner Bill Spalding told Everidge at a recent commissioners meeting. “Every day we do not get you that is lost to somebody who needs mental health help or addiction help.”

Leaders plan to collect data from the program throughout the initial five-year period to determine how it should evolve.

“Measuring success in the beginning is going to be a little more challenging because it does truly take time to engage people into recovery and into their treatment to start to see some of that,” Everidge said.

County Commissioner Marc Huber agreed, adding that getting the initiative’s first few years funded will provide time for discussions on more permanent backing. That could include grant programs, he added, for which having data would be advantageous as well.