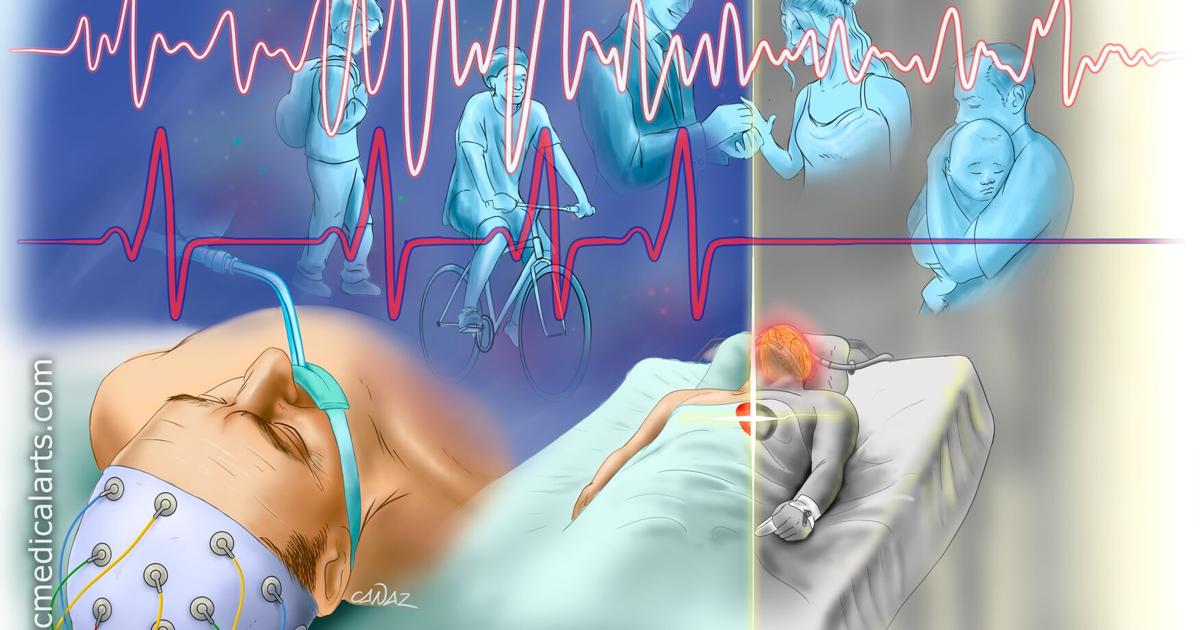 LOUISVILLE, Ky. (WDRB) – Scientists around the world and in Louisville are marveling at the first-ever recording of a dying human brain.

According to a release from the University of Louisville, it happened in Estonia when an 87-year-old patient with epilepsy had a fall. Dr. Raul Vicente of the University of Tartu and his colleagues continuously monitored the patient with electroencephalography. The goal was to detect the seizures, but during the recording of the brain waves, the patient had a heart attack and passed away.

Now, the graphs and images of the last 15 minutes of that patient’s life are revealing amazing details about what happens as we die. Evidence shows the brain has bursts of activity similar to memory flashbacks. So the idea of ​​someone’s life “flashing before their eyes” may have some truth to it.

“We measured 900 seconds of brain activity around the time of death and set a specific focus to investigate what happened in the 30 seconds before and after the heart stopped beating,” said Dr. Ajmal Zemmar, a neurosurgeon at the University of Louisville, who organized the study.

What happens inside your brain after death are questions that have puzzled neuroscientists for centuries. This process, known as “life recall,” can be similar to what it is like to have a near-death experience.

A study of the patient by Zemmar and colleagues, “Enhanced Interplay of Neuronal Coherence and Coupling in the Dying Human Brain,” was published this week in Frontiers in Aging Neuroscience.

Their research suggests that your brain may remain active and coordinated during and even after the transition to death, and be programmed to orchestrate the whole ordeal, according to a news release from UofL.

“Just before and after the heart stopped working, we saw changes in a specific band of neural oscillations, so-called gamma oscillations, but also in others such as delta, theta, alpha and beta oscillations,” Zemmar said in the release.

Brain oscillations are more commonly known as brain waves, which are present in living human brains. Different types of oscillations, including gamma, happen when people concentrate, dream, meditate, remember something, process information like those associated with memory flashbacks.

“By generating brain oscillations involved in memory retrieval, the brain may be playing a last recall of important life events just before we die, similar to the ones reported in near-death experiences,” Zemmar said.

Zemmar said the findings of the study could have bigger implications like the timing of organ donation.

“It opens an interesting question to me on when you define death,” he said. “That plays a big role for questions such as, when do you go ahead with organ donation? When are we dead? When the heart stops beating because the brain keeps going. Should we record EEG activity in addition to EKG to declare death? This is a very, very interesting question for me. When is exactly the time when we die? We may have tapped the door open now to start a discussion about that exact time onset. “

The findings, he said, could offer questions on the scientific, metaphysical and philosophical ways we interpret what humans know about the moment of death. Zemmar said on the spiritual side, he sees this discovery as “somewhat calming” when dealing with dying patients and their families.

“Right now, we do not know anything about what happens to their loved one’s brain when they are dying. I think if we know that there is something happening in their brain, that they are remembering nice moments, we can tell these families and it builds a feeling of warmth that in that moment when they are falling, this can help a little bit to catch them, “he said.

To read the complete study in the Frontiers in Aging Neuroscience, click here.