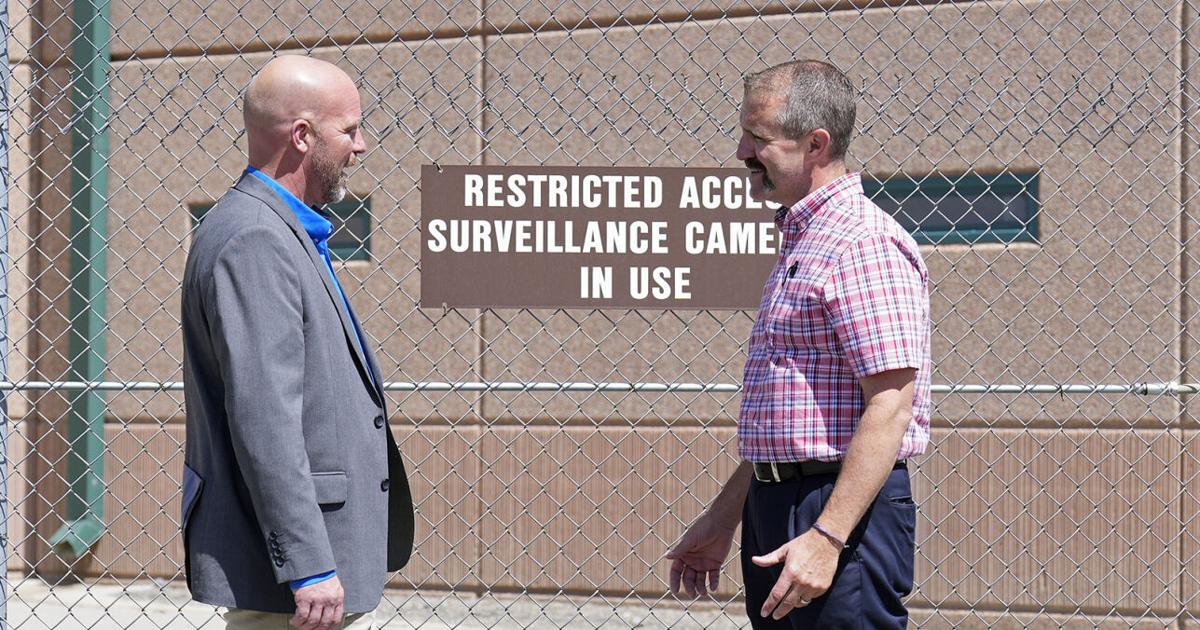 It’s also a major component of Mesa County’s efforts to deal with mental and behavioral health issues. Several things are happening within the jail and around the county that are designed not only to keep its population at a minimum, but also to help prevent inmates from re-offending.

One of the main tools the detention center has in place is Jail Based Behavioral Services, which provides a series of programs to help inmates with substance abuse, competence enhancement and medication assistance.

Some of that may seem like something you’d expect to be offered by a mental or behavioral health provider, such as Mind Springs, but jails have adopted them for two main reasons: To ensure a safe and secure detention facility for inmates and staff, and to help inmates correct their behaviors so, when they are eventually released, they have the ability to become productive members of society.

“We have this robust system to get them stabilized, but one of the things that we recognized was that when they walk out of our doors, there’s nobody to catch them,” Rowell said. “They’re out on the curb calling the last person they knew, and they end up back with the same people that got them in trouble in the first place.”

One way to handle that problem is through a relatively new transition program the jail started, one designed to help soon-to-be released inmates get the things they may need to succeed so the jail does not become a revolving door for them.

Until recently, the jail employed one person to handle those duties, but recently added a second.

“They deal with everything from getting them back on Medicaid, getting their driver’s license, getting them any paperwork they need for a Social Security card, basically things that they would need to get a job,” Rowell said. “They also link them up with treatment on the outside. A lot of the times, that treatment is not immediate. A lot of times, it’s two weeks or a month out, and somebody with a serious mental issue or substance abuse issue will never make it two weeks. ”

To respond to that issue, the Sheriff’s Office along with the Mesa County Department of Human Services and the Board of County Commissioners, announced a new program last week to deal with those so-called high-end users.

Rowell said it’s helpful, if not crucial, for the county as a whole to address mental and behavioral health issues beyond the needs of the jail.

That program, set to be up and running by August or September, would pick up where the jail leaves off, said Commissioner Janet Rowland.

Rowland has been at the forefront of finding ways to beef up how the county deals with mental and behavioral health issues, something that involves far more than dealing with inmates.

“I remember doing ride-alongs years ago, and I was shocked at the amount of social work that law enforcement officers have to do,” Rowland said. “That’s where I’m really hopeful that the case management piece will help with that, and that’s why we’re starting with that first.”

Like Rowell, Rowland said part of the problem is a lack of support for people with mental and behavioral health issues.

That program got a major boost last week when St. Mary’s Medical Center and its new owners, Utah-based Intermountain Healthcare, announced a $ 300,000 grant to help launch that case management component.

“Nobody’s family is spared. Nobody, ”said Dr. Marc Harrison, president and CEO of Intermountain, which recently purchased St. Mary’s and others in the SCL Health hospital group.

“Everybody feels the pain of behavioral health issues, and it’s never been more acute than right now on the tail end of the worst part of this pandemic,” he added. “To address behavioral health and do it right is a team sport. No one agency or area can fix this. The only way to address things is by playing on each of our strengths. ”

That money, along with funds from the Sheriff’s Office and state grants, will bring in about $ 1 million to get it up and running.

The new program is to be designed to hold people’s hands in getting their needs met. Doing so not only helps prevent future problems, but also saves taxpayer money in having to provide after-the-fact services, such as court trials and incarceration.

“So often they get off their meds, and that’s when they start to spiral down,” Rowland said.

“They start to hallucinate or they get aggressive and they assault someone. Now a crime is committed and they need to be arrested, ”she added. “If we can intervene sooner and have someone who is checking on them daily to make sure they’ve taken their medicine, that they’ve eaten or that they have a roof over their head, I think we’re going to see a decrease in that. I’m hopeful by this time next year, we’ll be able to see some real progress. ”

Earlier this year, the county announced a somewhat similar program designed to help anyone in need get help for a variety of things.

Called the Mental Health Navigation Hub, the program is to consist of seven people whose sole task is to “hold people’s hands” through the process of connecting them with treatment or whatever other services they require, Rowland said.

A separate group of workers also are to be on hand in a soon-to-come Economic Mobility Hub, which is to direct those in need to whatever financial aid they qualify for, such as food stamps or housing assistance.

All of this stems from a newly formed Mesa County Mental Health Collaboration, a group started by Rowland and others last year aimed at identifying problem areas and implementing a more comprehensive solution to address mental health needs.

Another way to deal with such incidents that is being implemented statewide, if not nationally, is to supplant law enforcement response in certain circumstances on such matters and replace or augment them with mental health professionals.

Because of internal issues at Mind Springs, the county’s two-person crisis response team that was created to help law enforcement is no longer.

Rowland and Rowell hope to have that back by fall, and with a bigger and better mission.

“Certainly it’s a gap, but we believe we’ve found a way to fill it,” she said. “For both the (Grand Junction) Police Department and the Sheriff’s Office, we’re looking at some potential funding through Rocky (Mountain Health Plans) that would help us piece together a team of five therapists who would be part of that co-responder unit. ”

“We used to have two therapists that were provided by Mind Springs, but as Mind Springs started losing staff, this was one program that they cut,” she added. “The city is also hiring two therapists to be their co-responder team. Between those seven, we believe we can cover everything. ”

Another thing the jail is doing, which was mandated by a new law passed last year, is to find more ways to mitigate mental health issues for anyone serving time in jail, including those who have not yet been adjudicated.

That new law requires jails the size of Mesa County’s or larger to more closely monitor inmates’ mental health, including providing them with more recreation time.

To do so, the jail is modifying one of its pods and its outdoor yards – at a cost of about $ 800,000 – to accommodate everyone, including creating more private outdoor areas for those too dangerous to be paired with other inmates.

One of the hardest parts of getting all this done is finding the right people to do the jobs, which inherently is not an easy one.

That, too, is something the county and jail are hoping to address.

“That is always a concern, and every project we designed in the (collaborative) assessment that would solve our problem, every one of them is pending on having the staff,” Rowland said.

“Part of what the group is working on is workforce,” she added. We are looking at some options through the state for loan-forgiveness programs for people who work as therapists. We’re cautiously optimistic that we’ll be able to staff up. ”

One measure, SB226, partly sponsored by Sen. Bob Rankin, R-Carbondale, and signed by Polis just last week, creates a new $ 61 million education grant program to help recruit and retain health care workers, including getting tuition assistance to help them obtain the degrees and certifications they need to get jobs.

Although HB1350, jointly sponsored by Reps. Janice Rich, R-Grand Junction, and Julie McCluskie, D-Dillon, similarly targets improving the state’s workforce generally, particularly in rural areas of the state, it identifies health care jobs as a crucial part of it.