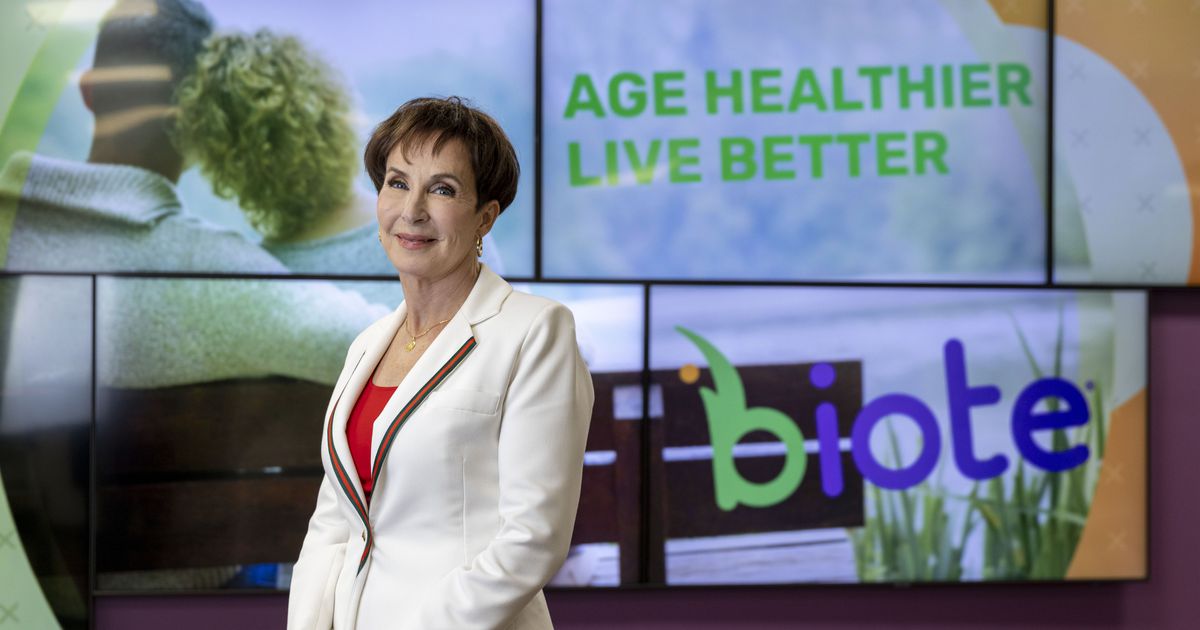 Irving-based hormone replacement therapy provider Biote goes public via a blank check company Friday, hoping a cash injection will be a springboard for accelerated growth as it aims for $ 166 million in revenue this year.

“Dallas was a great place to grow up from,” said Biote CEO Terry Weber, who moved to North Texas from Orange County, Calif., In 2018 to lead the company. “And now we’ve decided to go mainstream. That’s why we’re going public. ”

The SPAC raised $ 317 million in its March initial public offering. On Tuesday, stockholders approved the combination, with the newly formed company trading on Nasdaq under the ticker symbol BTMD. Biote said its implied initial equity value is about $ 737 million.

The 10-year-old company has never borrowed money and is turning a profit thanks to its franchise-like, asset-light business model. The medical practice-building business reported revenue of about $ 140 million in 2021, up about 20% from the previous year.

Biote partners with practitioners, bringing them to a two-day training event on hormone replacement therapy using pellets, which are inserted into the upper buttocks and slowly release hormones into the bloodstream. The company said pellets allow doctors to personalize dosage amounts based on lab testing for the patient and are convenient, requiring only two to four procedures per year.

After the training, Biote provides the practitioner’s clinic with the pellets and insertion tool, software to track patient treatment and inventory, training for front- and back-office staff and marketing materials.

The company operates in a controversial market that has required it to do its own studies to combat past research that showed a linkage between hormone replacement and breast cancer. Biote said its studies show that pellets that mimic the effects of hormones in a patient’s body are not only safe but can help reduce the chances of breast cancer.

In June 2017, the North American Menopause Society updated its guidelines on using hormone replacement therapy, saying its benefits outweigh the risks for women younger than 60 or within 10 years of menopause who have no medical reasons to avoid it. But it emphasized that the therapy should be personalized, taking into account the woman’s age and personal health risks.

During its training, Biote shows practitioners data and studies that support its position on the safety and benefits of pellet hormone replacement therapy, Weber said. It has more than 5,300 contracted providers in more than 2,800 clinics, representing just about 2% of its potential practitioner market, the company said. Biote said it has a 90% clinic retention rate.

The global hormone replacement therapy market was pegged at around $ 15 billion in 2021, according to Future Market Insights. Biote said it has “massive penetration opportunity remaining” in the US, considering its core states of Texas, Oklahoma, New Mexico, Colorado, Arkansas, Louisiana, Mississippi, Alabama, Georgia and Florida make up 67% of its revenue.

Biote has made headway internationally as well. Doctors from both Mexico and the Dominican Republic have completed Biote’s training program, and the company plans to open clinics in both countries.

Steven Heyer, who was also formerly CEO of Starwood Hotels & Resorts Worldwide, said he and his brother were drawn to Biote because it’s profitable and has no close competitors. Its No. 1 competitor, Dallas-based Evexipel, has 300 clinic locations while Biote has more than 2,800, according to Biote.

He noted that hormone pellet therapy is also “not cyclical, not seasonal and not Amazon-able.” He described Weber as a “force of nature” who impressed them.

It is not lost on Weber that the SPAC market, which was on fire last summer, has since reversed. Data shows 2021 had 613 SPAC IPOs while 2022 has had just 68 so far, according to tracking site Spacanalytics.com. But Weber said Biote is confident in its choice as the Heyer brothers are on board with the company’s mission and want to see it grow long-term.

Hormone replacement therapy is largely used by women to relieve menopausal symptoms, including hot flashes, night sweats, depressed mood, low libido and weight gain. In the US, about 1.3 million women become menopausal each year. Of Biote’s about 300,000 active patients, most are between the ages of 45 and 70 and 80% are women while 20% are men.

Biote was founded in 2012 by Dr. Gary Donovitz, who used $ 25,000 of his money to start the company after discovering pellet hormone replacement therapy. Previously, in 1990, Donovitz had founded The Institute for Hormonal Balance, which has locations in Arlington, Irving and Prosper.

“With almost all patients, it was life-changing and had amazing results,” he said.

That’s when Donovitz started thinking about “a higher calling” of partnering with practitioners to help change health care, he said. Having gone through medical school himself, Donovitz said he knew firsthand that hormone replacement was not a big focus, leaving doctors ill-informed.

Biote started to sign up a few clinics in Dallas and grew from there. The partnership is attractive because it’s low-cost to start, requiring only a $ 3,500 training fee, Donovitz said. Many revenue streams for clinics carry large capital costs, such as buying expensive equipment for laser hair removal.

Costs for the 15-minute procedure that includes numbing cream or an injectable anesthetic start at $ 350 for women and $ 700 for men but vary geographically, Weber said. Biote estimates an average clinic receives $ 240 in revenue per procedure and does 310 procedures per year, which equates to about $ 75,000 in added revenue. More than 2.5 million procedures have been performed in its decade in business.

Biote gets about 80% of its revenue from procedure fees, while the other 20% is from sales of its dietary supplements, something it uses its partnerships with clinics to sell.

After about 10 years of growth, Donovitz said he knew the company needed someone with experience scaling companies like Weber. He now serves as Biote’s senior adviser to the board, senior medical adviser and senior research adviser.

In January, the company had 152 employees, including 107 in sales and marketing, according to a Securities and Exchange Commission filing. Weber said she expects to add 60 positions this year, mostly in sales and support to help it expand outside of its core states and internationally.

Hormone replacement therapy has drawn criticism, largely due to a study from the early 2000s from the Women’s Health Initiative that said it led to a small increased risk of breast cancer, heart disease, stroke and blood clots. Since then, new studies have come out showing that the risk of developing cancer from hormone replacement is more complex and dependent on the type of treatment, dosage, age of the patient and the duration of use.

Donovitz has been working on his own studies to show that Biote’s method is safe.

The same year, Donovitz published another study based on seven years of data that said procedures with one or more complications for testosterone and estradiol pellets across 1.2 million procedures was less than 1%. The most common complication was a pellet coming to the surface and working its way out for male patients, something that can happen with increased activity, the study said. The study also showed that 43% of patients discontinued pellet therapy after the initial pellet insertion. But after two pellets, the continuation rate was 93%.

Dr. Cory Rice, an internal medicine and functional medicine doctor in Dallas, said he was one of the physicians who wasn’t well educated on hormone replacement therapy before attending a Biote training.

Similar to Donovitz, Rice said he got a call from a colleague in Dallas raving about the training he attended on pellet therapy. The friend said he learned more in one Biote training weekend than in the 20 years he had been practicing, Rice said.

Hormone replacement therapy “is not a big part of medical school training,” Rice said. “It absolutely needs to be a bigger part.”

Rice said Biote opened his eyes to studies and data he had not seen before. He is now an advocate for plant-based molecules that mimic the ovarian hormone or the testicular hormone rather than synthetic molecules that could be perceived as foreign to the body, he said.

“I have since changed my tune and because of HRT studies, I am now a firm believer that hormones themselves do not lead to increased risk of breast cancer,” Rice said. “We need more publicity on this because patients do not read medical journals with the updated studies.”

Side effects are rare. Rice said he’s seen some patients come back with a hair or acne spot somewhere they do not want, in which case they adjust the dosage, or sometimes a pellet comes to the surface of the skin and pops out.

Rice said between 50% and 60% of his patients are on hormone replacement therapy and, of those, 98% have chosen Biote. The convenience of only having to undergo treatments a couple of times a year to alleviate symptoms is a big draw, he said.

“Patients want you to hear them,” Rice said. “The days of spending 15 minutes with them and prescribing a pill are numbered. This method offers a way to personalize the health experience. ”

Treatments for trans youth at Dallas hospital can continue until April, court orders