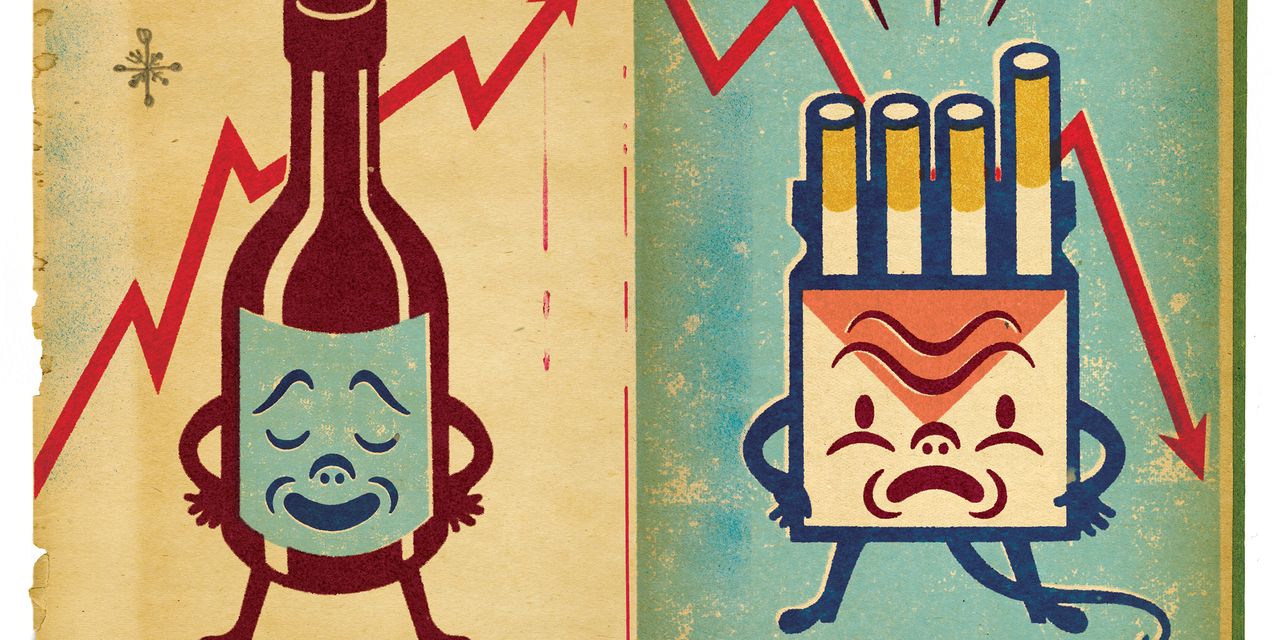 Some sin stocks seem to be easier to forgive than others. Investors’ fondness for liquor over cigarettes is a puzzle, even if it shows little immediate sign of changing.

The tobacco sector shows how quickly popular investments can sour if regulators decide to crack down on addictive consumer products. Five years ago, big cigarette stocks were trading at 19 times projected earnings on average, having generated total annual shareholder returns above 20% since 2000 — more than four times the S&P 500 average. They have since plunged and now fetch just 11 times because of the threat of stricter tobacco laws, including recent proposals to ban menthol flavors in the US

Could the same thing ever happen to alcohol? Having a few drinks is not as bad for your health as smoking, and tobacco firms clearly sell a more toxic product. Globally, eight million people die every year from diseases caused by cigarettes. But drinking is a big problem too, causing three million deaths annually, according to the World Health Organization.

Factor in the total social costs of both products to include things such as crime, traffic accidents and lost productivity at work, and the gap between tobacco and alcohol narrows. Problems caused by tobacco cost 1.8% of global gross domestic product, according to the World Health Organization. A study by the Organization for Economic Cooperation and Development found that excessive alcohol consumption lowers GDP by 1.6%.

Investors currently treat booze stocks as significantly less harmful than tobacco. Based on an analysis of funds with at least 200 holdings, just 2.5% of global assets under management exclude alcohol companies from their portfolios, compared with 11.5% for cigarette firms, according to estimates from ESG data analytics provider Ethos ESG. Other controversial industries such as gambling and pornography fall somewhere in the middle.

And when it comes to valuing alcohol stocks, the harder the better. More potent liquor stocks are priced at a premium to companies that make lower-strength alcohol such as beer because of the former’s better sales growth. Major distillers such as Casamigos tequila maker

trade at 26 times projected earnings on average, compared with 18 times for global brewers. This is at odds with how many governments treat stronger alcohol for tax purposes. In the US, for example, the federal levy on liquor is $ 13.50 a gallon compared to just $ 0.58 a gallon for beer, according to data from The Tax Foundation.

Drinking is less stigmatized than smoking in many of the world’s largest economies, which may explain why the two industries are viewed differently. The economic activity and employment generated by drinking in bars and restaurants has no real equivalent in the tobacco sector. And cigarette companies poisoned relationships with regulators by trying to hide the health impact of smoking for decades.

Without a cultural shift in how society views drinking, the risk that more investors will divest booze stocks seems low. Higher taxes on alcohol are a more realistic threat. The WHO recommends that authorities slap levies worth at least 75% of the total cost on a pack of cigarettes. The burden on alcohol is lighter: Taxes account for 28% of retail prices in developed economies on average, analysis by Jefferies shows.

In February, the WHO launched an initiative to encourage countries in Europe, the region with the highest alcohol consumption per person in the world, to increase the duties they collect on booze. It estimates that a minimum 15% tax on the retail price per unit would reduce alcohol-related deaths in Europe by around a tenth.

This could impact drinks companies with exposure to markets such as France and Germany, where beer taxes can be as low as 7%. The Russian market is an extreme example of what can happen when levies increase. Beer profit margins in Russia fell from 16% in 2010 to 9% around a decade later as higher taxes made products less affordable, Bernstein notes.

Do you invest in alcohol and tobacco companies? Why or why not? Join the conversation below.

Luckily for investors, politicians find it harder to raise taxes on drinking than on tobacco in most countries. For one, higher prices impact more people — seven in 10 American adults reported drinking alcohol over the past year in the latest survey by the National Institute on Alcohol Abuse and Alcoholism, while smoking prevalence in the US has fallen to just 13%.

Alcohol companies have also been savvier than cigarette businesses at dealing with regulators and spend part of their ad budgets promoting responsible drinking. A push into nonalcoholic products, as well as the premiumization trend whereby consumers in mature markets are drinking more expensive booze but less of it, should help to shield the drinks industry from criticism. By 2025, Budweiser brewer

wants one-fifth of all the drinks it sells to be of the low or no-alcohol variety.

Drinks giants like AB InBev and Heineken admit that irresponsible drinking is one of the biggest threats to their businesses. So far, they are managing the risks well. Their stocks may not reflect it today, but alcohol companies have more in common with tobacco than investors like to admit.