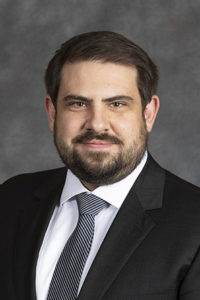 The Banking, Commerce and Insurance Committee heard testimony Feb. 15 on a bill that would prohibit health insurance coverage restrictions on medication that is administered by a clinician.

The bill defines such drugs as an outpatient prescription medication that a patient cannot administer themselves and requires the assistance of a health care provider in a clinical setting.

Policies that cover a specific illness and employee self-funded benefit plans would be excluded from the bill’s provisions.

“White bagging has caused delays in patients getting their medications and has even resulted in hospitals being sent the wrong dose or the wrong medication,” he said.

Lori Murante of the Nebraska Medical Center testified in support of LB943. Federal law requires medicine to be tracked, she said, but white bagging complicates that process, burdening hospitals and causing delays in patients receiving prescriptions.

“White bagging allows insurers rather than health care providers to mandate where, when and how drugs are purchased, prepared and administered,” Murante said.

Elizabeth Boals-Shively of Henderson Health Care Services also spoke in support. She said white bagging has caused pharmacies to send an incorrect medicine or the wrong dosage of a correct medicine to her hospital.

“LB943 means that patients can receive their injections and infusions when and where it is most accessible,” Boals-Shively said.

David Root of pharmacy benefit manager Prime Therapeutics testified against LB943. He said the bill is anti-competitive and would cause patients to pay more.

“These drugs are incredibly expensive,” Root said. “The idea that we as PBMs are simple is going to waste that product is, frankly, insane.”

Also in opposition was Jeremiah Blake of Blue Cross and Blue Shield of Nebraska. White bagging is used sparingly and helps control costs and keeps premiums low, he said.

“From the patient’s perspective, these tools are a safe and effective way to get the same medication, administered by a health care provider with the same therapeutic outcome, at a lower cost,” Blake said.

The committee took no immediate action on LB943.