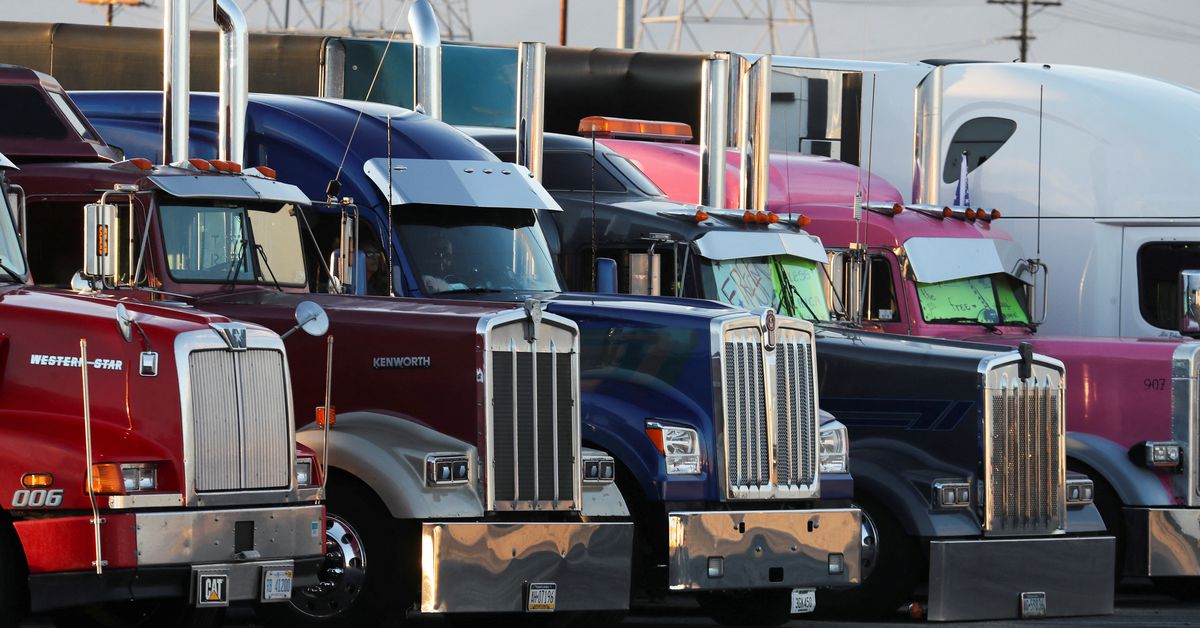 ADELANTO, Calif., Feb 23 (Reuters) – A group of American truckers began a cross-country drive from California to Washington on Wednesday to protest coronavirus restrictions, taking a cue from demonstrations that paralyzed Canada’s capital city, Ottawa, for weeks.

More than two dozen 18-wheeler trucks, along with some 50 pickups and recreational vehicles, left Adelanto, California, about 80 miles (130 km) northeast of Los Angeles. The self-styled ‘People’s Convoy’ is beginning an 11-day trek to the Beltway, a major highway encircling the US capital, to demand an end to COVID-19 vaccine and mask requirements.

Coleman, a trucker for 45 years, said the group was also pushing for the end to the emergency powers that US politicians have used to enact pandemic-related restrictions.

Preparations are being made in Washington for the expected arrival of the convoy and other similar protests in the coming days. The Pentagon said it had approved 400 National Guard troops from the District of Columbia, who would not carry weapons, to help with traffic posts from Saturday through March 7.

About 50 tactical vehicles were also approved to be placed at traffic posts. In addition, up to 300 National Guard troops from outside of Washington will assist at traffic posts if needed.

US House Speaker Nancy Pelosi said she was “confident” in the security plans to protect Washington around the time of President Joe Biden’s State of the Union speech next Tuesday.

The People’s Convoy is expected to arrive in the Washington area on March 5 but there are no plans to go into the District of Columbia proper, according to a statement.

Brian Brase, a truck driver and one of the organizers, said regardless of where the trucks stop, “we’re not going anywhere” until the group’s demands are met.

Brase said he expected thousands, perhaps tens of thousands, would participate. Organizers bill the convoy as nonpartisan, trucker-led, and supported by a wide range of ethnic minorities and religious faiths.

The truckers are making their demands even as most US states have already eased many restrictions. In California, where the convoy begins, the state lifted universal mask requirements last week while requiring masks for vaccinated people only in high-risk areas such as public transit, schools and healthcare settings.

Another convoy, made up of a single 18-wheeler and a handful of pickup trucks and SUVs, left Scranton, Pennsylvania – Biden’s hometown – on Wednesday morning and was headed to the Beltway sometime during the afternoon.

Organizer Bob Bolus told Washington television station WJLA that his convoy has no intention of breaking laws or blocking traffic, but warned this could happen if their demands regarding pandemic mandates and the cost of fuel are not meant.

In Canada, protests choked streets in Ottawa for more than three weeks and blocked the busiest land crossing between Canada and the United States for six days.

Prime Minister Justin Trudeau invoked rarely used emergency powers to end the protests, and Canadian police restored a sense of normalcy in Ottawa over the weekend.

In the United States, new COVID-19 cases and hospitalizations due to the coronavirus have plummeted from all-time highs hit a month ago, though nearly 2,000 people per day are still dying from the disease and the number of total deaths is closing in on 1 million since the pandemic began.

Reporting by Omar Younis and David Swanson in Adelanto; Additional reporting and writing by Daniel Trotta in Carlsbad, California and Brendan O’Brien in Chicago; Editing by Mark Heinrich, Jonathan Oatis and Rosalba O’Brien