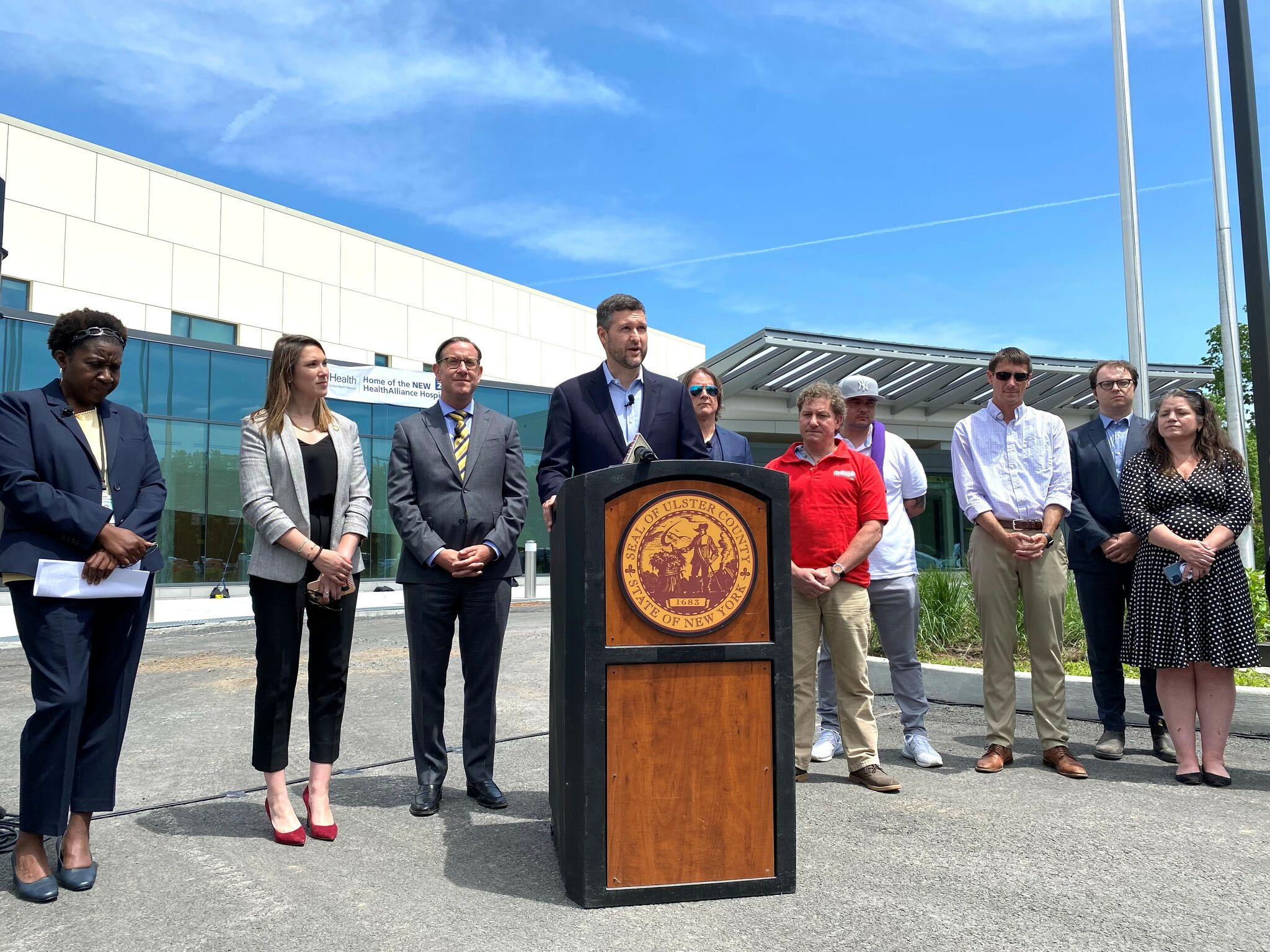 Public officials gathered Wednesday outside the renovated Mary’s Avenue campus of the HealthAlliance Hospital in Kingston to announce an agreement to bring back 20 inpatient mental health beds to Ulster County, which has lacked hospital inpatient psychiatric services since the beginning of the COVID-19 pandemic. At that time, suicides in the county doubled and fatal opioid overdoses rose by 93 percent.

The agreement is pending the approval of New York State.

“Now more than ever, we must guarantee that all residents have ample access to vital local mental health and addiction recovery services,” said Ulster County Executive Pat Ryan. “I am so proud that our community came together and advocated tirelessly to ensure these services are available, and appreciative that Westchester Medical Center truly listened, worked collaboratively with us and stepped up to make it happen.”

The beds, which had provided the only inpatient psych and detox services in Ulster County, were ultimately never used to treat COVID-19 patients. But even as COVID surges waned, WMC consistently refused to commit to reopening the units, which operated at a financial loss, prompting widespread concern among hospital staff, health advocates and elected officials that the critical services were gone for good.

In response, a coalition of advocates led by nurses from the New York State Nurses Association and 1199SEIU United Healthcare Workers East initiated a public campaign to pressure WMC to bring back the beds. Ryan also launched a petition demanding that the state deny any application submitted by WMC requesting decertification of inpatient behavioral health beds at HealthAlliance. The petition surpassed 1,000 signatures on its first day.

“Since our services have disappeared, I noticed that a lot of people I used to see come in have also disappeared,” said Gabe Valdez, a SEIU1199 union member and emergency room technician who recently lost a brother to suicide after he was released from an overcrowded North Carolina mental health facility after just four days. “Those are the things that kept me yelling so angrily and so passionately to get this stuff back.”

The 20 beds are expected to be online sometime in the first quarter of 2023, according to WMC Executive Vice President and Chief Strategy Officer Josh Ratner. The HealthAlliance is in the process of a $ 135 million project to consolidate services at an upgraded Mary’s Avenue campus and transform the Broadway campus into a “medical village” focused on outpatient care. The Mary’s Avenue renovation is on track to be completed this October, after which Ratner said the inpatient mental health beds will be submitted for state certification and constructed.

Ratner said there is no plan to reconstitute a dedicated detox unit at Mary’s Avenue, instead outlining a goal to “cohort those patients in an area so that we are not using a scattered bed program.”

Janet Strominger, a NYSNA labor relations representative, called that “a great start, but they need to set up a separate unit as they had before, because it is dangerous for the other patients on the unit and it’s dangerous for the staff [to intersperse patients]. You need specially trained staff to provide detox patients with specialist care. ”

WMC also announced that it would expand the number of inpatient behavioral health beds at its Poughkeepsie hospital, MidHudson Regional, from 40 to 60. Many patients experiencing an acute mental health crisis in Ulster County have been transferred to MidHudson Regional if they are deemed in need or inpatient care.

The goal, as outlined by hospital and elected officials, is for the new inpatient beds to complement new services New York State, Ulster County and WMC have invested in, including community-based outpatient programs, a mobile mental health response team, and a forthcoming $ 3.3 million crisis stabilization centerone of the first in the state.

“Effectively what we looked at was, ‘How do we make sure we have a model that provides local access for care, but also ensures that we have a sustainable model for staffing,'” Ratner said. “At the end of the day, when you look at inpatient care, there’s probably the ability to fill a lot more beds.”

He added that WMC wanted to resurrect a local access point for patients experiencing mental health crises, “but what we’re really trying to do is create a center of excellence in the northern region and be able to shift patients if we need to, and provide specialty care in each of the locations. ”

Last year, WMC laid off 41 workers at its Kingston hospitals as part of an overall effort to consolidate services and cut costs. “Some reduction in our workforce is necessary for operational efficiencies and responsible fiscal management of the organization,” officials said in a press release at the time.

“Today is a day to celebrate a win,” said State Sen. Michelle Hinchey, who has been among the cadre of elected officials calling for WMC to return the mental health beds. “But we’ll all be paying very close attention, and staying in conversation to make sure it’s the best it could possibly be.”