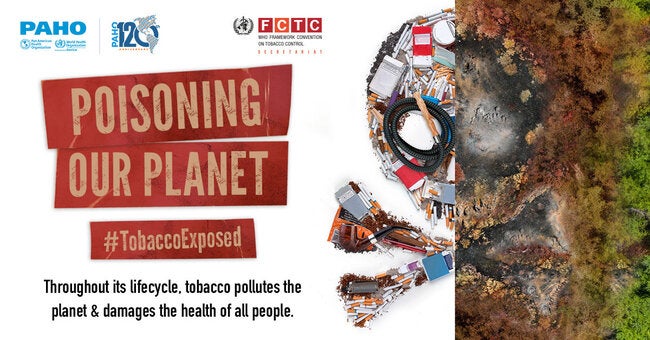 The winners, selected by the World Health Organization (WHO) from global nominations in response to a public call, have been recognized for their efforts to ensure progress towards tobacco control in their countries.

In El Salvador, Violeta de Palomo won the award for her work with Fundahabla, an organization she founded in 2014 to provide health care, psychological support, speech therapy, and rehabilitation for people with laryngeal cancer. As a leader of the anti-tobacco movement in El Salvador, Violeta also coordinates the @sumatecontraeltabaco initiative to ensure 100% smoke-free public spaces, support for smoking cessation, and advocacy for increasing taxes on tobacco products.

In Mexico, President Andres Manuel Lopez Obrador received the WHO Director-General’s Special Recognition Award for his leadership and unwavering support for strengthening tobacco control measures in his country. His efforts led to the unanimous approval of the reform of the General Law for Tobacco Control in 2021, which has resulted in a complete ban on tobacco advertising, promotion and sponsorship, as well as the creation of smoke-free environments throughout the country. Over the course of the past year, Lopez Obrador has reaffirmed the importance of tobacco control, ensuring that the right to health of all Mexicans supersedes the interests of the tobacco industry.

In the United States, Thomas Novotny, Professor Emeritus at San Diego State University School of Public Health, won the award in recognition of his research and advocacy around the environmental impact of tobacco, particularly regarding post-consumer waste such as filters. Novotny is a founding member of the Cigarette Butt Pollution Project (CBPP), an organization that campaigns against the environmental impact of tobacco products, particularly cigarette butts.

World No Tobacco Day was created by WHO Member States in 1987 and is commemorated each year on 31 May. The aim of the day is to raise awareness of the harmful effects of tobacco use and second-hand smoke exposure.

The theme of World Not Tobacco Day 2022 is “Poisoning our planet”. Tobacco kills over 8 million people every year and destroys the environment, further harming human health through its cultivation, production, distribution, consumption, and through post-consumer waste.