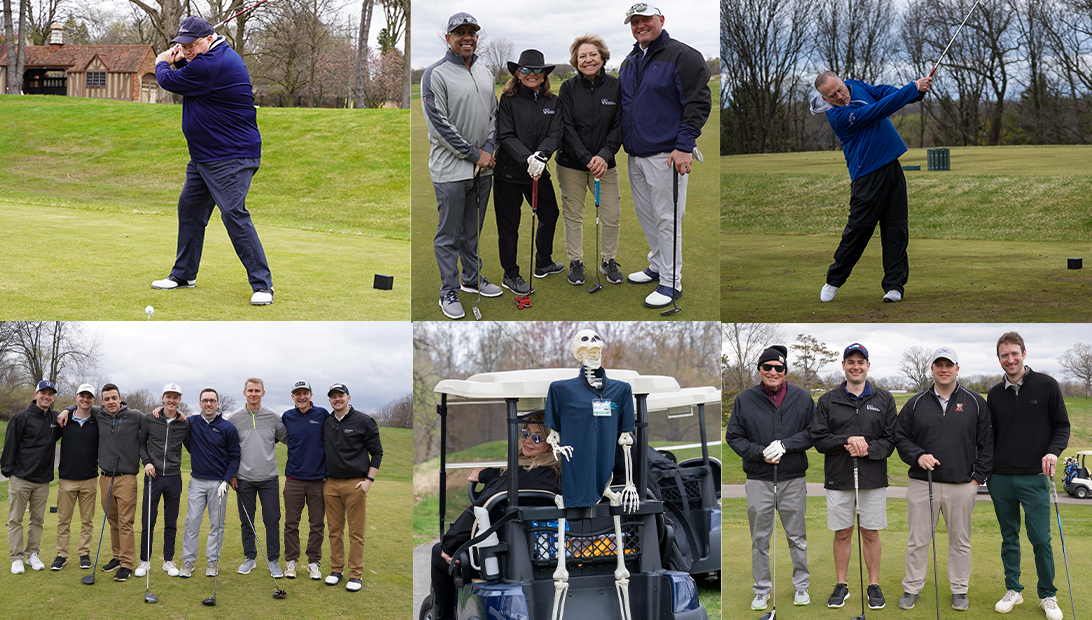 The inaugural golf outing hosted by Oakland University William Beaumont School of Medicine delivered on two promises – a good time had by all, and in the name of a great cause.

The OUWB Golf Outing was held Monday, May 2, at the world-class R&S Sharf Golf Course at the Oakland University Golf & Learning Center.

More than 140 golfers participated in the event that was designed to support medical student scholarships.

Duane Mezwa, MD, Stephan Sharf Dean, OUWB, thanked all of the golfers and sponsors during the afterglow event. He also announced the second OUWB Golf Outing already is set for May 7, 2023.

“I made a promise when I came on three-and-a-half years ago that I would do everything I could to try and put dollars back into students’ pockets,” he said.

“The reason I wanted to do this event was to raise money for the students and have a good time doing it.”

According to the American Association of Medical Collegesthe debt of graduating medical students averages around $ 207,000.

Mezwa said that OUWB has taken several measures for its students to get that number to about $ 203,000.

Such measures, including the golf outing, mean a lot to students like Nataly Salman. The first-year medical student spoke at the afterglow.

“Studying medicine was something I knew I always wanted to do, but it’s sometimes difficult to do when the cost does not always seem too feasible,” said Salman.

Salman thanked the golfers and sponsors for helping students like her live out their dreams at OUWB.

“Your generosity is a reason that some of us are able to be here today,” she said. “The words ‘thank you’ are never enough to express our immense gratitude.”

“When I’m serving the community as a physician or making discoveries as a scientist, or leading and teaching the next generation of dreamers, I’ll remember that this type of contribution and what you did is all part of the impact and I ‘ ll keep this sentiment close to my heart, ”she said. “I have vowed to reciprocate the same act of selflessness, (and) this random act of kindness.”

“It really shows how an event like this brings us all together for the common good,” she said.

‘A great way to have some fun’

Claus Weimann, director of Philanthropy, OUWB, said “it was really wonderful to see so many people and organizations come out and support OUWB’s future physicians.”

Grant, also a member of the OUWB Dean’s Advisory Boardsaid Blue Cross Blue Shield views itself as a “health care partner that supports the community.”

“Supporting future generations of physicians is important to us… that’s what it’s all about and we thank (OUWB) more than you even know,” he said.

Golfers generally expressed similar support for OUWB as the primary motivation for participating in the outing.

“I really like school and what they’re doing,” said Joseph Anderson, MD, an oncologist at Beaumont, Royal Oak. “They’ve done a good job and I want to show my support.”

Chris Carpenter, MD, chair of Internal Medicine, OUWB, said he not only enjoyed seeing his colleagues in the social setting, but also in the name of a good cause.

“Our medical school students need additional support and this is a really nice way to provide it,” he said.

“It’s a cool opportunity to talk to people who are not necessarily just within our school, whether it’s doctors, administrators, or people at Beaumont,” said Garrett Peters, a first-year medical student at OUWB. “It’s also just a great way to have some fun.”

Austin Kantola, M1, said he loves the game of golf and called the outing “a perfect opportunity to network with some doctors.”

OUWB alumni were among those doctors.

S. Brandon Luczak, MD (’15), an orthopedic surgeon with Trinity Health, was among a contingent of golfers from OUWB’s first class.

“I just wanted to support the school, and play golf on a Monday,” he said with a smile.

Chris Jaeger, MD, (’15) – set to be the alumni speaker at the OUWB Commencement on May 13 – said he used to play golf with his classmates on the Katke-Cousins ​​Golf Course, which is also on the campus of Oakland University .

The pediatric urology fellow at Boston Children’s Hospital said he was surprised at the turnout for the golf outing.

“I did not know so many people not only cared about our medical school, but wanted to give back,” said Jaeger. “It’s pretty awesome.”

Still others, like Lila Lazarus, award-winning news anchor and health reporter, said the day was all about “fun, love, and adventure.”

“As part of that – the fitness and wellness piece, specifically – you got to get outside and really enjoy yourself each and every day… you have to find a little joy every day,” she said. “Anytime I’m on the golf course at Oakland University, that’s joy.”

To request an interview, visit the OUWB Communications & Marketing webpage.

NOTICE: Except where otherwise noted, all articles are published under a Creative Commons Attribution 3.0 license. You are free to copy, distribute, adapt, transmit, or make commercial use of this work as long as you attribute Oakland University William Beaumont School of Medicine as the original creator and include a link to this article.