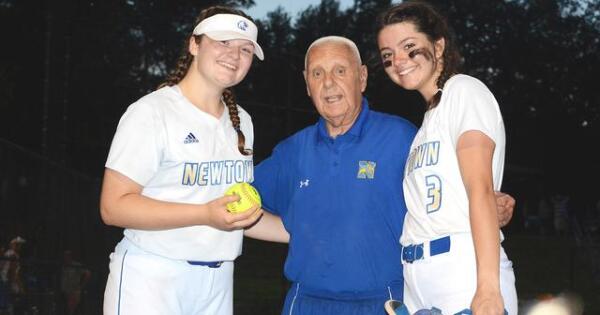 During the course of any sporting event, there are numerous things that add up to create the end result. In the case of junior pitcher Sydney Adolfson’s five-inning perfect game, in which Newtown High School’s softball team earned a 12-0 mercy-rule win over visiting New Fairfield in the South-West Conference Tournament’s quarterfinal round at Treadwell Park on May 21, the most significant factor was her sheer dominance. After all, among the 15 outs Adolfson recorded, 13 were via the strikeout.

But the final out was an interesting one. Freshman shortstop Madison Thoesen made a nice play to cleanly field a sharply-hit grounder and threw across the infield. First baseman Caroline Gardner stretched out and did a split to catch the ball just ahead of New Fairfield’s Brianna Puff’s foot touching the bag. Perfect game over. The second-seeded Nighthawks advanced and the seventh-seeded Rebels were left without anybody reaching first base.

Gardner, a junior, is a former gymnast who has turned her focus to softball but showed gymnast form and used her flexibility to help make that out happen.

“All I wanted to do was save that play. I had to do whatever I could, ”Gardner said.

Until that final out, a fly ball to right fielder Julia Berry was the only other one put into play by the visiting Rebels.

“She was dialed in,” Newtown Coach Joanna Closs said of Adolfson’s dominance from the pitcher’s circle.

After Newtown built a commanding lead, Closs toyed with the idea of ​​putting Gardner in the pitch part of the game. If that had happened, it is possible this would have been a combined perfect game given how well Gardner has pitched – including a six-inning, one-hitter against Stratford late in the campaign – and it would have been Adolfson finishing the game at first base.

“She was dealing so well I knew there was a good chance we’d end it in five,” Closs said of her decision to leave Adolfson out there to finish the job.

The Nighthawks scored seven runs in the second inning to break the game open and won by double digits for the eighth time this season. Adolfson fanned every batter at least once, getting ahead in the count and keeping the opposing batters on their heels with her velocity and ball movement by mixing up her pitches.

“I just keep attacking the batter,” said Adolfson, who helped Newtown post its eighth shutout of the spring.

After the win, Adolfson received the game ball from Assistant Coach Lin Hertberg.

Senior catcher Morgan Melillo calls the pitches and works well with Adolfson, but gives all of the credit to the pitcher.

“She does me favors. It’s easy to make her look good. She always hits her spots, ”Melillo said.

Adolfson reaches 60 miles an hour at times, and that heat can make it hard not only for batters to keep up but also for Adolfson’s backstop to do her job.

“Her speed is a little too much for me sometimes,” said Melillo, who has been borrowing sophomore teammate Bri Pellicone’s catcher’s mitt and wearing a padded glove under it to absorb the impact.

“My old one was broken in way too much from catching her last year,” Melillo explained.

If Adolfson and the Nighthawks follow up the SWC playoffs with a run deep into state tournament, and opposing batters continue to swing and miss, Pellicone may need to borrow someone else’s catcher’s mitt next time she goes behind the plate.

Sports Editor Andy Hutchison can be reached at andyh@thebee.com.

Sydney Adolfson throws a pitch during her five-inning, perfect game when Newtown blanked New Fairfield in the SWC quarterfinals at Treadwell Park, on May 21. Shortstop Madison Thoesen, who made a play for the final out, stands in ready position.

Catcher Morgan Melillo was behind the plate for Adolfson’s 15-up, 15-down performance.