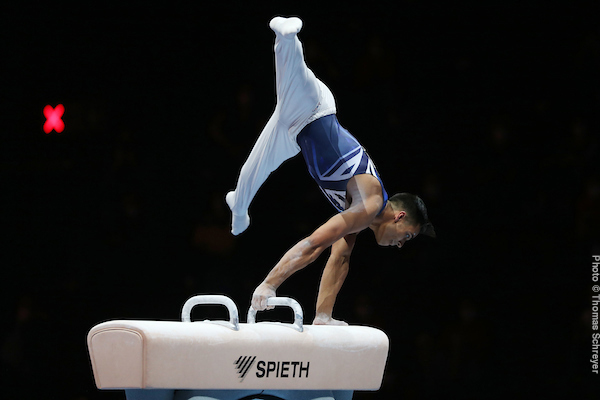 Ninth all-around in his world championships debut last fall, British gymnast and architecture student Joshua Nathan has built a strong foundation for himself on the global stage as faces new challenges including this year’s European Championships and World Championships.

Born September 25, 1999, in Nottingham, Nathan trains at City of Birmingham Gymnastics Club under coach Lee Woolls with assist from Luke Folwell. He is studying architecture at Birmingham City University.

Nathan shares his thoughts on his 2021 success, and his aspirations for the current Olympic cycle, in this International Gymnast Online interview.

IGO: As a worlds newcomer in Kitakyushu, how did you manage to perform so consistently in qualifications and even more strongly in the final, where you bettered your qualifications score by over two points?

JN: I managed to perform consistently as a result of the hard training that I put in, in the three months building up to the event. I learned how to cope with some of the pressure that comes with competing through the Challenge Cup in Slovenia and the British Championships.

IGO: Heading into worlds, was your goal mainly to qualify for the pommel horse final, and / or the horizontal bar final, or did you think you also had a realistic shot at the all-around final?

JN: Heading into the event I was not very hopeful for the horizontal bar final as I did not believe my routine to have the required level of difficulty, although it was my first worlds and I was not expecting much. However, at the back of my mind I had hopes for the pommel horse final and the all-around final. I believed to have a more realistic chance for the all-around final of the two finals of which I made.

JN: With an incredibly strong field of all-around gymnasts in Great Britain it is extremely difficult to say a ranking. However, I believe to have bettered myself with these results and I hope to continue to do so.

IGO: Given the changes in the Code of Points for the new quadrennium, what changes will you make to both upgrade your own level of skills and satisfy the demands of the Code?

JN: I have been speaking and using the guidance of my coach to adapt to the new Code of Points, and am conscious that I will need to start to compete before I can really have an understanding of the correct skills I need to pursue to upgrade my routines.

IGO: How do you balance your daily training with your studies in architecture? What is a typical day like for you?

JN: I balance daily training and my studies by filling the majority of my time outside of the gym with academic work. A typical day would be to train from 9:30 until 15:00, then attend university at 15: 30-17: 30. Depending if I have any more training to do I will go back to the gym from 18: 00-19: 30, then I would return home and cook some food. Next, I do some more studying until and go to bed.

IGO: What specialty in architecture do you plan to focus on when you begin your professional career?

GB’s Amelie Morgan: ‘Everyone played a part in it’

Great Britain’s Giarnni Regini-Moran: ‘I can not ask for more’

GB’s James Hall: ‘I’m now the strongest and fittest I’ve ever been’

GB’s Jessica Gadirova: ‘Staying Strong Though The Tough Times Has Paid Off’