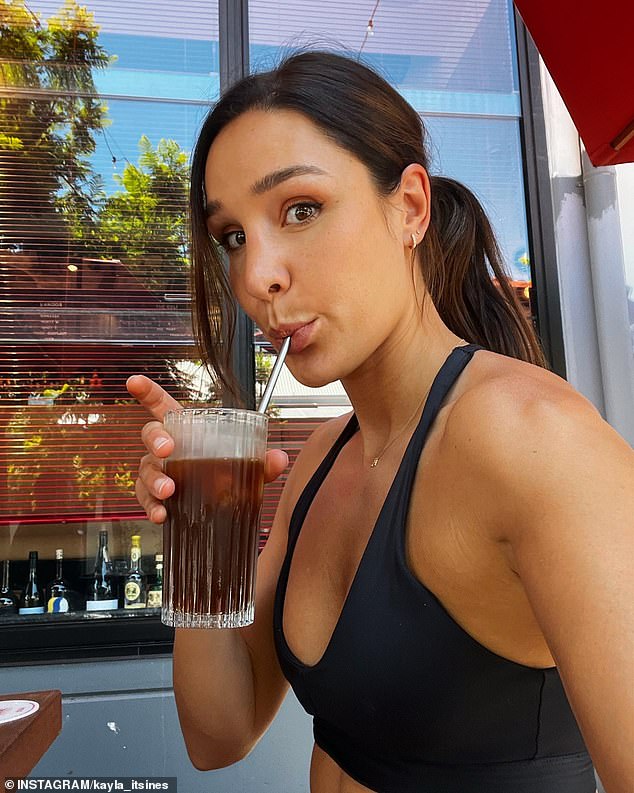 Fitness queen, Kayla Itsines has shared her personal reasons why she stopped drinking alcohol when she was 19 years old.

In a video posted to her millions of followers on Facebook and Instagram, the fitness sensation explained she gave up drinking alcohol because it ‘does not suit her lifestyle’ and someone close to her suffered from addiction.

Kayla said giving up the booze was an ‘uncomfortable’ experience where she had to ‘stand her ground’ and that she often leaves events early because people pressure her to drink.

In a video posted to her millions of followers on Facebook and Instagram, fitness sensation, Kayla Itsines, explained the ‘uncomfortable’ reasons why she does not drink alcohol and said ‘does not suit her lifestyle’

‘I feel like when people drink alcohol it’s almost like this liquid confidence that they get that I can not maintain,’ she said.

‘When they start drinking, they start acting a little bit different from what they normally act like around me. I feel like I can not meet their energy level and I automatically feel uncomfortable around a person that I thought I knew. ‘

Kayla said her alcohol abstinence causes people to pester her into drinking at events.

‘They never get there but they try; ‘why do not you just have one drink?’ or ‘just a little sip of alcohol’, ‘just one glass’, ‘just try it’, ‘you might like it’. I feel this pressure and just end up leaving, ‘she said.

‘I’m 30, I stopped drinking when I was 19 so I’ve been fighting this for 11 years … not even a sip, not even one drink, not even a special occasion, like I just do not drink,’ she said.

Another big factor in Kayla quitting drinking was her experience watching someone close to her struggle with a drug and alcohol addiction.

‘I watched the downward spiral of a person and what happens when alcohol is taken too far or the wrong way and is mixed with things like illegal drugs … it was just so off putting for me,’ she said.

‘I’m not saying everyone that drinks ends up that way. Absolutely not, but it was just this process that I’m watching and it was a really hard time for me. ‘

Kayla said when she was young before she gave up the booze for good she would pretend to drink on nights out, ordering lemonade with ice and lime to make it look like a cocktail.

Kayla said when she was young before she gave up the booze for good she would pretend to drink on nights out, ordering lemonade with ice and lime to make it look like a cocktail

She also said she wanted to feel fresh on Sunday mornings training clients when she first started her fitness career.

‘I want to be role model to woman, to people, to anyone, to show them that you do not have to drink to have fun.’

11 years after jumping on the wagon, Kayla has not looked back but assured viewers she has no judgment against people who do chose to drink.

‘Every single one of my friends drinks. My family, they’s Greek, they have big weddings, they drink Ouzo, and there’s plates going everywhere. It’s a thing, ‘she said.

‘No judgment from me but I hope in turn that people do not judge me for not drinking.’

She also said she drinks mocktails, coca cola with ice or ‘anything tropical’ and non-alcoholic when she’s out and that the only alcohol she will tolerate is when she treats herself to a tiramisu.

Many of her followers supported Kayla’s decision not to drink and shared their own experiences with alcohol.

‘I entertain clients at work who drink like fish and they do not love me any less because I do not and can not drink (the good ones anyway) and that is just going to have to be ok with everyone. We can all have a great time without me drinking, ‘one woman wrote.

‘Thank you so much I did not drink for years and the pressure got to me and I would only drink on special occasions. I decided yesterday that I loved when I did not drink and how much better I felt so have made the decision to go back to not drinking, ‘said another.