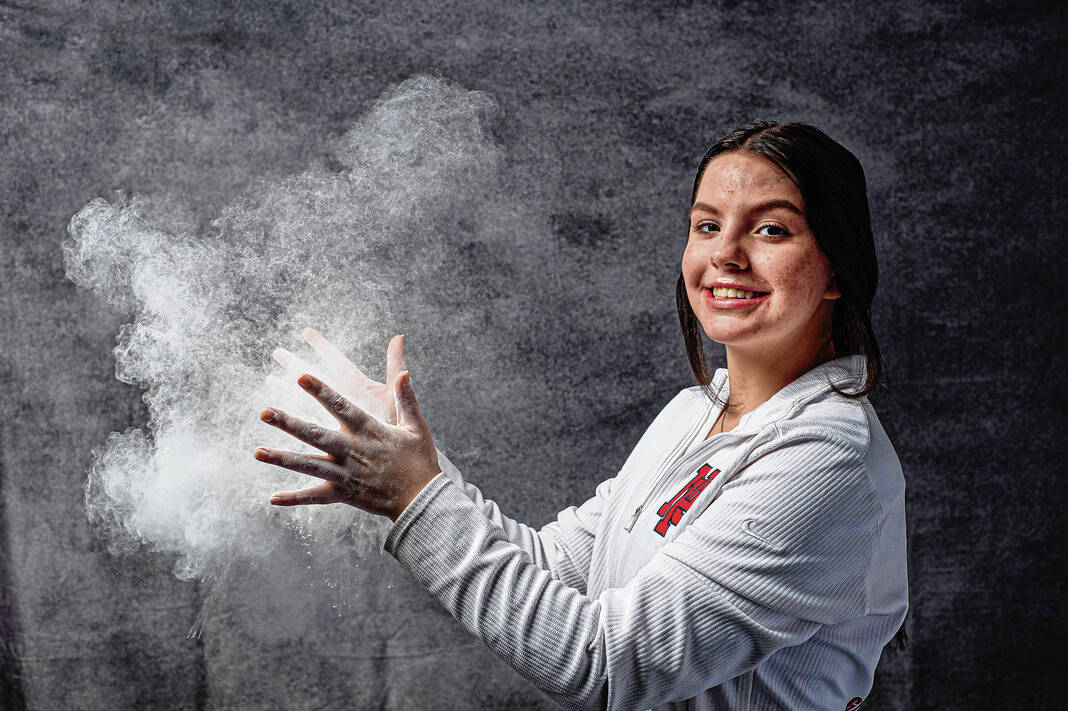 Fee and the New Palestine gymnastics program are hopeful the frosh phenom will be at full strength as a sophomore. What she was able to do in her first high school season, considering her limitations due to back pain, was pretty remarkable.

A Level 10 gymnast, the highest level in the USA Gymnastics Junior Olympics Program, Fee battled through back and hip pain that made it tough for her to walk and nearly impossible for her to run.

The Daily Reporter’s Hancock County Gymnast of the Year was still able to achieve high marks throughout the season.

She was the lone Dragon gymnast to have multiple 9.0-or-higher scores during the season. She did it three times on balance beam.

She is the program’s first Level 10 gymnast since Regan Elsea, who was the state runner-up on vault and third in the all-around in the 2015 state finals.

New Palestine head coach Debbie Bruns wasn’t sure Fee would be able to compete at all.

“I do not know what else to say other than being in awe of her determination,” Bruns said. “I know the pain she was in, but still she’d get up and try. She was bound and determined… She was in the top 3 in every event she was competing even with her watered-down routines. She knew we were counting on her and I think she felt like, ‘I’m not going to let the team down.’ ”

Fee was dealing with a labrum tear in her hip. Her bone was pinching that tear and tearing it more. At one of the meets this past season she felt it completely tear during an uneven bars routine.

The pain is something Fee had been dealing with for two years. “The first year, it was not terrible and I competed at club,” Fee said. “By the end of the season it got to where it hurt to get up and walk. I ended up quitting club, but wanted to do the sport, so I did high school gymnastics.

Admitting she is a little stubborn, too, Fee said her competitive drive kept her going.

Fee had surgery to repair the labrum tear at the end of the season. She was scheduled to go back to school in late April. She plans on being ready to go for the next high school season.

She just got rid of her crutches and is able to start working out but is not allowed to add any extra weight. In three months she’ll be able to pivot her foot. For now, she can only go forward and backward. By July or August she could be fully released, but added she will have to slowly work her way back into it.

Her love of gymnastics started when she was only 11-months old. Her mother worked at Gymnastics Unlimited and her sister, Kate Fee, who also had a standout career as a Dragon gymnast, was on the team there. She started classes before her first birthday and has always been a part of the sport.

This season, because she could not run, Fee, except for a couple meets, did not compete on the vault. She was able to do routines on balance beam, floor exercise and uneven bars, though it was a painful process.

“(Her) best event was beam. She was very good on floor. For high school, she was good on bars, ”Bruns said. “If she can come back and do the skills she used to compete in club, she will definitely be one of the top kids at the state meet, but it’s a long road to recovery.”

To compete this season, Fee did not do a lot of the tougher skills that got her to a Level 10. She said she was performing Level 6 skills during the high school season.

Bruns said they’d often have to take things out of her set because they were too risky.

At the Connersville Sectional in February, Fee had New Palestine’s top score on both floor and beam.

She was sixth overall on floor with a score of 8.7. She had one of her best scores of the season, a 9,075 on beam to place fifth. A score of 8.4 on bars was good enough for seventh place.

At the Franklin Central Regional in March, Fee just missed another 9.0 on floor, scoring an 8,975, placing 16th. It would have been her first nine on an event other than beam.

“I was still able to enjoy it,” Fee said of her first high school season. “My high school teammates made it very enjoyable. In club gymnastics you are mainly on your own. There’s a team score, but it’s not as much of a team effort. In high school you really depend on your team to pick you up and you have a good time with them. ”

Hopefully for Fee there will be better and less painful times ahead.

“It was very tough, because I’m very competitive,” Fee said of her freshman season. “I knew I could do more but my body could not take it and that was very frustrating.

“I think (the season) went well. At some meets I was disappointed because I am very competitive and wanted to do more, but overall I think it went well and I’m proud of myself. ”