Does Social Media Influence the Motivation to Exercise?

by Steve Heldon
in Fitness
0 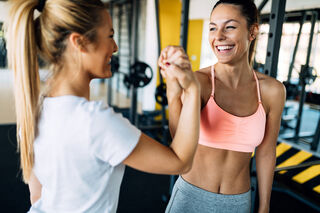 Are you becoming increasingly concerned or obsessed with looking good? Do you exercise to enhance your appearance or do you exercise for sheer enjoyment? Are you influenced by the media, which often features content portraying idealized body types?

Exposure to the media has often been found to be related to body dissatisfaction and negative body image. Furthermore, social media in particular allows users to employ filters to enhance content and manage their appearance, selectively choosing which content to upload. In addition, users often compare themselves with perhaps somewhat unrealistic ideals portrayed on social media, leading to feelings of inadequacy and the motivation to engage in dieting and exercise.

Social media is different than traditional media in many ways. It facilitates self-promotion and self-presentation. It also features more personal content with users ascribing a higher perceived realism to it compared to traditional media. For example, users probably view workout photos of friends as more realistic than those of celebrities found in the traditional media. Finally, access to social media is unlimited, allowing users to view content such as photos and status updates at any time and on a regular basis.

Women with positive body images report that regular exercise is a means to increase their well-being rather than to lose weight, but does social media have an influence also? A study looking at compulsive exercise and dieting in women who posted their exercise routines on Instagram found that women who posted such images scored higher on measures of compulsive exercise and a drive to be thin compared to a control group who posted travel-related images (Holland & Tiggemann, 2017). Therefore, does social media encourage people to exercise more, and if so, for what reasons?

Thin Ideal – The extent to which a person accepts socially defined ideals of attractiveness, and adopts behavior consistent with this, for example agreeing with the statement “Women who are in shape are more attractive.”

Objectified body consciousness – A preoccupation with how one’s body appears to others. Objectification theory suggests that women are socialized to view their bodies from an observer’s viewpoint, because of a culture where women’s bodies are pervasively objectified. Objectified body consciousness consists of body surveillance, acceptance of culturally specific beauty ideals, and appearance-based evaluations of one’s self.

Exercise Motivation – Either to control weight or to maintain fitness.

Overall, our study found that the time female participants spent on social media was associated with higher levels of thin-idealization, objectified body consciousness and the motivation to exercise. More specifically, those who spent more time on social media scored higher on all three measures compared to those women who spent less time per day on social media.

One reason is that social media is used for comparison and self-evaluation. Initially comparisons may be inspirational, although as time passes, women may become frustrated, which results in body dissatisfaction. Indeed, previous studies have found that individuals reporting high levels of thin-idealization use social media and engage in appearance-related activities more frequently.

Objectified body consciousness is divided into body surveillance, acceptance of cultural beauty ideals, and an evaluation of oneself which is appearance driven. It may be that exposure to social media increases levels of objectified body consciousness among women, because it allows them to share posts with a wider audience. Additionally, one can often cautiously monitor and edit the content which is uploaded.

The results of the present study confirm that time spent on Facebook, Instagram and Pinterest significantly predicted levels of exercise motivation. This finding supports Holland and Tiggemann (2017), who found that exposure to ‘fitspiration’ images (those which motivate a person to maintain or improve their fitness) lead to higher scores on measures of compulsive exercise and disordered eating among women.

Participants in the present study were of a similar young age, and future research should perhaps explore the effects of Facebook, Instagram and Pinterest use on body image concern in men and older people. The measures used in this study were linked with body dissatisfaction and disordered eating, and consequently it is perhaps important to work towards interventions minimizing the negative effects of social media exposure in the future.

Does eating processed meat cause cancer? The evidence suggests that

West Hollywood father hospitalized with COVID: ‘I really regret not getting my vaccine’ – KTLA Los Angeles

A Nutritionist Tells Us How To Stop Nighttime Overeating – Yahoo Life

No Result
View All Result