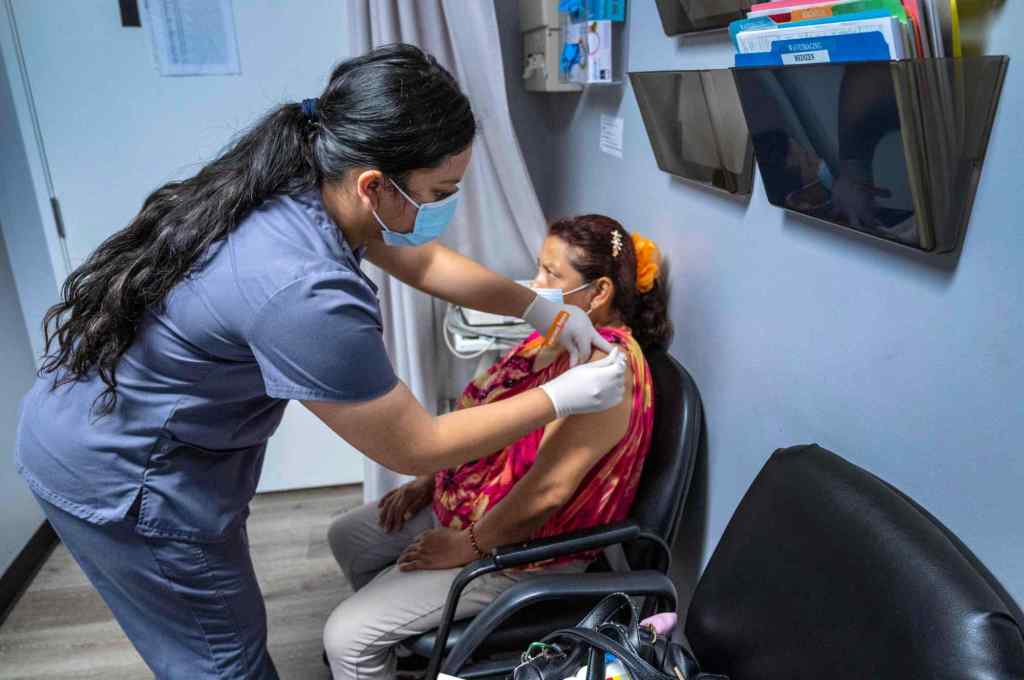 Consider this California’s first coronavirus surge of the endemic era.

Even with the rise in home tests that do not make it into official statistics, the state is now reporting more confirmed cases per day than it did at the peak of the summer 2020 surge, and is closing in on summer 2021 surge levels.

But while public health officials and experts are concerned about the increasing transmission levels, they are not expecting a crush of disease to overwhelm hospitalsas past surges did.

“Most of the people that we’re seeing in the hospital are having very mild disease compared to the previous waves,” said Dr. John Mourani, medical director of infectious disease at Pomona Valley Hospital Medical Center.

A number of factors are at play, experts say. While the variant that’s dominant right now is extremely contagious, it appears to cause less severe disease than previous forms of COVID-19, said Dr. Robert Kim-Farley, a professor at UCLA Fielding School of Public Health who is an expert in epidemiology and infectious diseases. High rates of immunity from vaccination or past infections also are protecting people who get sick against severe disease and death, and medical treatment has improved.

“This is what endemicity looks like,” said Andrew Noymer, a professor of population health and disease prevention at UC Irvine.

Compared to a pandemic – a worldwide emergency – an endemic means a virus “is always with us, circulating, and from time to time we may have surges, but because it is less deadly, because of vaccinations and natural immunity, the severity does not put as many people in the hospital,” Kim- Farley said.

Even so, he said, the rising case numbers should be a wake-up call for people to get vaccinated or boosted if they aren’t already, and take other reasonable precautions.

“We need to be more vigilant, especially when in crowded settings, to wear a mask to help reduce the rate of transmission,” Kim-Farley said. “Also, masking is important for people who are at higher risk of the disease, such as those who are elderly, or with multiple medical conditions, or especially the immunosuppressed.”

California reported an average of 11,200 cases per day in the week ending May 17 – the most recent week with reliable data, because the numbers are based on what day a person got tested or got sick, not when their results came back, and results take some time.

That’s double the cases from just three weeks prior and more than five times higher than the recent low of about 2,100 cases per day in the week ending March 21.

Cases have risen in every county in California, but the increases have been sharpest in rural northern and central regions, while the Bay Area currently has the highest case rates when adjusted for population.

San Francisco added 378 confirmed cases for every 100,000 residents from May 11 to May 17, according to the latest state data. Del Norte, Santa Clara, San Mateo, Sonoma and Marin counties all had more than 300 cases per 100,000 residents as well.

Rates were lower in Southern California: 206 in San Diego County, 200 in Los Angeles County, 143 in Orange County, 132 in Riverside County and 105 in San Bernardino County.

Kim-Farley said a big reason why the Bay Area is doing worse now may be that it did much better than Southern California in previous surges, which means there are more people there who are still susceptible.

California as a whole has been doing better than some other parts of the US – much of the Northeast and parts of the upper Midwest have high community levels of COVID-19, according to a CDC measurement that’s based on both case and hospitalization rates. California has a handful of counties with medium levels, including LA County as of last weekbut most of the state is still considered low.

“I think we need to look to the Northeast to recognize that we may be in for further increases here in Southern California, but at the same time I’m hopeful that we do tend to use masks more than in the Northeast, so that may help blunt the height of the surge, ”Kim-Farley said. He also noted California’s higher vaccination levels among seniors and higher booster shot rates.

Hospitalizations up but still low

California’s case rates may be back in summer surge territory, but its hospitalization numbers, mercifully, are not.

On the recent day when California’s daily average of new cases topped 10,000, nearly 1,400 people statewide were hospitalized with COVID-19. At previous times when the case rate has gone above 10,000, many more people have been hospitalized:

As of Tuesday, May 24, California hospitals were treating 1,961 people with COVID-19; the only times that number was lower were the past two months and about a three-month period in 2021.

It’s not all good news – the numbers of people in the hospital and in intensive care units have both doubled since their record low points last month. In Southern California:

But as Mourani, the Pomona Valley Hospital Medical Center physician, points out, not everyone in the hospital with COVID-19 is there for COVID-19. For example, someone may come in because of a fall or fracture and test positive, but their case is mild or asymptomatic. Other people may be in the hospital because the virus worsened an underlying condition such as diabetes or heart disease.

Mourani estimated that, lately in his hospital, roughly half of patients with COVID-19 are there specifically because of COVID-19.

Those patients, he said, are mostly elderly or have underlying conditions. And while the percentage of COVID-19 patients who are vaccinated is higher than it once was, Mourani said that makes sense because more of the community is vaccinated. The vaccinated patients are mostly getting mild disease, he said.

Accurate death data can take weeks or months to come together, so it’s hard to say what the current increase in cases will mean for mortality levels.

Mourani said he’s hopeful that with less severe disease and better treatment options, the virus will continue to become less deadly. (He also stressed that treatments are most effective when started as soon as possible after a person first feels symptoms – when patients come into the hospital with severe symptoms, it’s usually late in the disease and more difficult to treat.)

But while the omicron variant may not be as deadly, it’s still killing people. Omicron was identified last Thanksgivingand state data shows that at least 12,700 people died from COVID-19 in December through February, making it California’s second-deadliest wave so far.

No one can predict how long the current wave will last, but Noymer said virus levels in wastewater have started going down in Massachusetts, which may be an early sign that its surge is starting to ebb, so other parts of the country could follow suit.

State data also indicates that while case levels here are still rising, the pace of increase may be starting to slow.

When a disease becomes endemic, like COVID-19 now has, it will come and go in cycles. New variants will develop, and while evolution tends to favor milder strains – if a virus kills its hosts too fast or makes them too sick to go out, it can not spread – experts say there’s no guarantee that some of those variants won’t be worse.

Noymer pointed to influenza: There was a catastrophic pandemic starting in 1918 and the disease eventually became milder, but there were fairly bad outbreaks in the 1950s and ’60s.

“And so it’s not like you can say it only ever goes down,” he said.