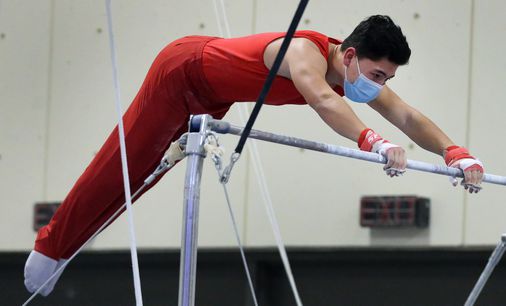 Massachusetts is one of a handful of states remaining to sponsor boys’ gymnastics at the high school level. In 2013, the MIAA moved to end the sport, but a public uproar prompted the decision to be reversed.

However, in the years since, the number of schools offering the sport has dropped from seven to just four (Braintree, Burlington, Lowell, and Newton North / South).

The Globe’s most recent sports headlines delivered to your inbox every morning.

“Freshman year, I knew nothing about the sport,” said Medford High principal Paul D’Alleva, who competed for Burlington during his high school years. “By the end of the year, I was doing a roundoff-back handspring-back layout.”

Since the 1980s, participation in boys’ gymnastics has declined. And with that, high school teams were cut. With so few boys high school teams left, boys looking to do the sport turn to girls’ teams, and the girls have made allocations for their participation. Boys can focus on floor exercise and vault, the two events that cross over between the two. Boys can also compete as all-arounders, doing balance beam and uneven bars, the two events not done in boys’ gymnastics. That is the path for Framingham’s Kevin Theodoro, who placed 10th in the all-around at the girls’ state championships.

So the question is not where the boys are. The question raised Tuesday: how to get those competitors on boys’ teams?

How about regional or league-based teams – an idea Burlington tried to do this past season, opening their roster to any boy within the Middlesex League. Or transitioning to a swimming model, in which teams would be co-ed, with girls and boys competing in their respective events at the same meet.

Longtime officials representative Kathy Ostberg urged the group to think outside the box.

“If we stay the way we are, we will go extinct,” said Ostberg.