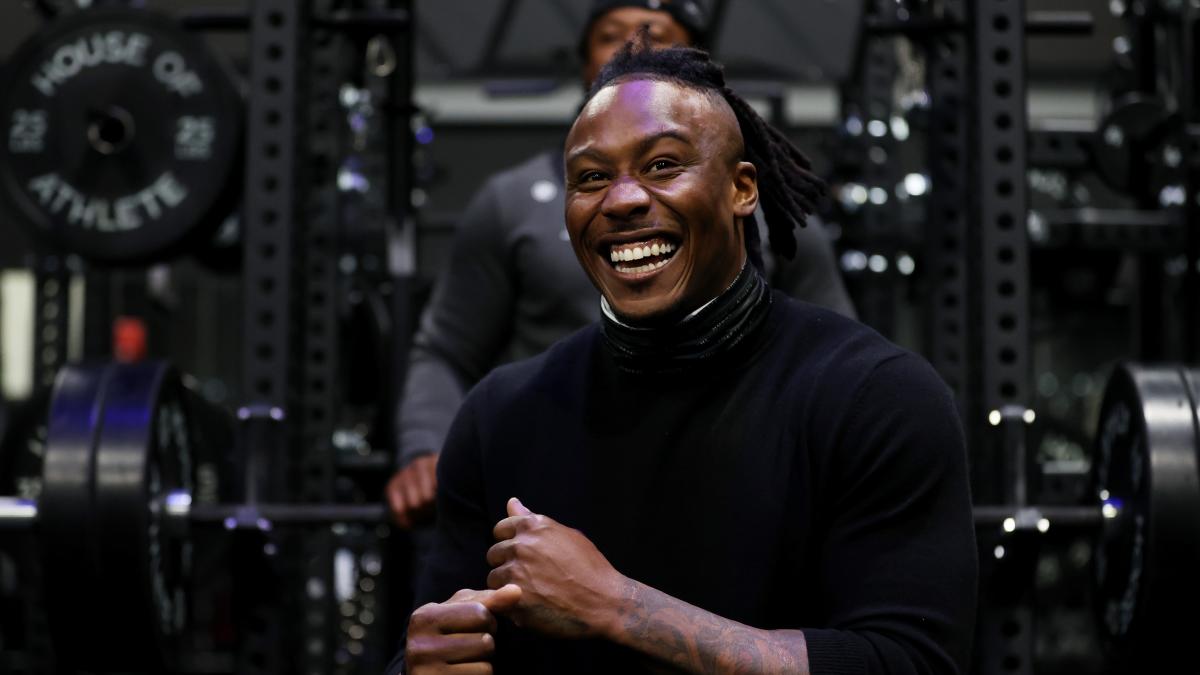 Former NFL wide receiver Brandon Marshall is on the show chatting about the importance of mental health in sports and life and how current stars like Dak Prescott, Naomi Osaka, and Simone Biles are leading the way in this crucial area.

BRANDON MARSHALL: You know, and there’s a lot that comes with Antonio Brown. He’s really complex. My story the first five years was extremely complex, right? So like, what happens when you have some off-the-field troubles, and then you go on the field, and those moments like what happened at MetLife, or slamming down the helmet. You know, then it all gets jumbled in.

And nobody understands what’s going on. Hell, we just saw Tom Brady break his tablet. Is something wrong with Tom Brady? But Tom Brady does not have those off-the-field challenges and problems. And so it’s easy for us to just say, you know what? This is just an ultra-competitor, he’s super compassionate, and he’s actually a leader. He’s riling up his team.

JARED QUAY: We here at “The Rush” are so hyped for Super Bowl LVI, and we’ll be at Radio Row all week heading into the game. But first, we’re bringing you a conversation with a 13-year NFL veteran, a six-time Pro Bowler, and a host of “I Am Athlete” podcast, Brandon Marshall. As the public discussion of sports and mental health grows, we wanted to hear the perspective of B-Marsh, an expert on the topic who was way ahead of his time.

In 2011, you actually spent a few months in the hospital program for mental health, and you were diagnosed with borderline personality disorder. What did it mean when you heard doctors put a name to what you were experiencing?

BRANDON MARSHALL: Oh, life, new life. And you know, man, like, it was one of the best days of my life. Because I sat there, and there was a lot of things that people knew and understood what was going on. And there were some things that nobody had any clue about what I was experiencing, what I was going on. Like, isolation, depression, you know?

So being able to go to McLean Hospital, go through a clinical evaluation, neurological evaluation, and someone say, oh, we can treat this. Oh, man, it was awesome, because now I’m a football player. My innate ability and my training just kicked in. Give me a game plan, give me the playbook, I’m going to bust my ass learning these things, whether it’s dialectical behavior therapy, mentalization therapy, self-assessment, cognitive behavioral therapy, and I’m going to get through this.

So everybody’s case is different, it presents itself in different ways. But that was my approach. And after three months, man, the light at the end of the tunnel was clear as day.

JARED QUAY: Just following up, as we’re like 11 years past that now, how are you feeling now with what they diagnosed you with?

BRANDON MARSHALL: Oh, I mean, I feel great. You know, borderline personality disorder, the best way to describe it is emotional disorder. A lot of people living with it do not have the skills or tools to be able to self-regulate. That’s the perfect example.

Someone jumps on a Zoom call, curses us all out, our feelings are valid, we’re pissed off, we’re upset, we’re angry. Someone like myself who did not have the skills or tools naturally, like, I may be up here at a 10 for an hour, where everybody else is like, man, what was wrong with that guy? And maybe back down to baseline in five minutes or two minutes. Someone like me, it may stick with me for two days, maybe two weeks, right? So I had to learn those skills and tools to be able to self-regulate.

And now it’s all about performance for me, right? Like, that’s how I look at my spectrum. It’s all about performance. Actually, tonight at 8:45, I’m going to see my therapist. Because now I’m a podcaster, a YouTuber, an influencer, I’m an entrepreneur. We’re opening three facilities, we’re launching three shows. So there’s a lot of stress and a lot that comes with that. So now it’s about how do I stay ahead of it, right?

And I think that’s a lesson for a lot of people is like, do not wait until something presents itself or something happens. Get ahead of it.

JARED QUAY: You actually publicly discussed your mental health situation more than 10 years ago, and it was a different world back then. And now, I feel like the world is more open up to hearing athletes talk about how their mental health comes first, from Dak Prescott to Naomi Osaka and Simone Biles. How do you feel like the evolution of people being more aware of this has helped, and the difference between what you went through to what current athletes may be going through?

BRANDON MARSHALL: Oh, man, it’s phenomenal. I mean, everything that we did in the community through Project 375, our non-profit, was for this moment, to raise awareness, to start the conversation, to take it from a taboo topic to everyday conversation in our households and our school systems and government, walking the halls of Congress, speaking all over the world. So to see the Naomi Osakas and Simone Biles and the other names that you mentioned now standing up, saying, this is what I’m dealing with, this is what I’m living with, I did not think we would see this, I truly did not.

But is there a way where athletes can be living with these things and these challenges, or dealing with this moment, but still be able to go out there and perform and play, right? And I think there is. And I think because the conversation is so new, and because people do not know who to turn to and what to do, now we’re reacting, right? “I feel this. And I know mental health is important now, but I got to stop, I can not play.”

And my goal moving forward, now that the conversation is starting– has started, is to get our athletes to respond. And by responding is like what I just said. 8:45 tonight, I’m going to be sitting down with Miss Gayle, who worked with me when I was playing for the Chicago Bears.

And I’m going to talk about, hey, I just had someone come into my office today and ask for a raise. I had someone else in me– they do not really deserve that. I had someone else come into my office today and put in their two-weeks notice, and I actually love this person, they’re great for the culture, they’ve great for what we’re doing. And so like, if our athletes now can actually put that in part of their routine, then I think we’ll see– well, I know we’ll see a healthier athlete.

JARED QUAY: Oh, man. Shout out, Miss Gayle for keeping you level so that you can keep other people level, man.

BRANDON MARSHALL: Hey, it’s a hard job for her, I’m tell you that. It’s something you do.