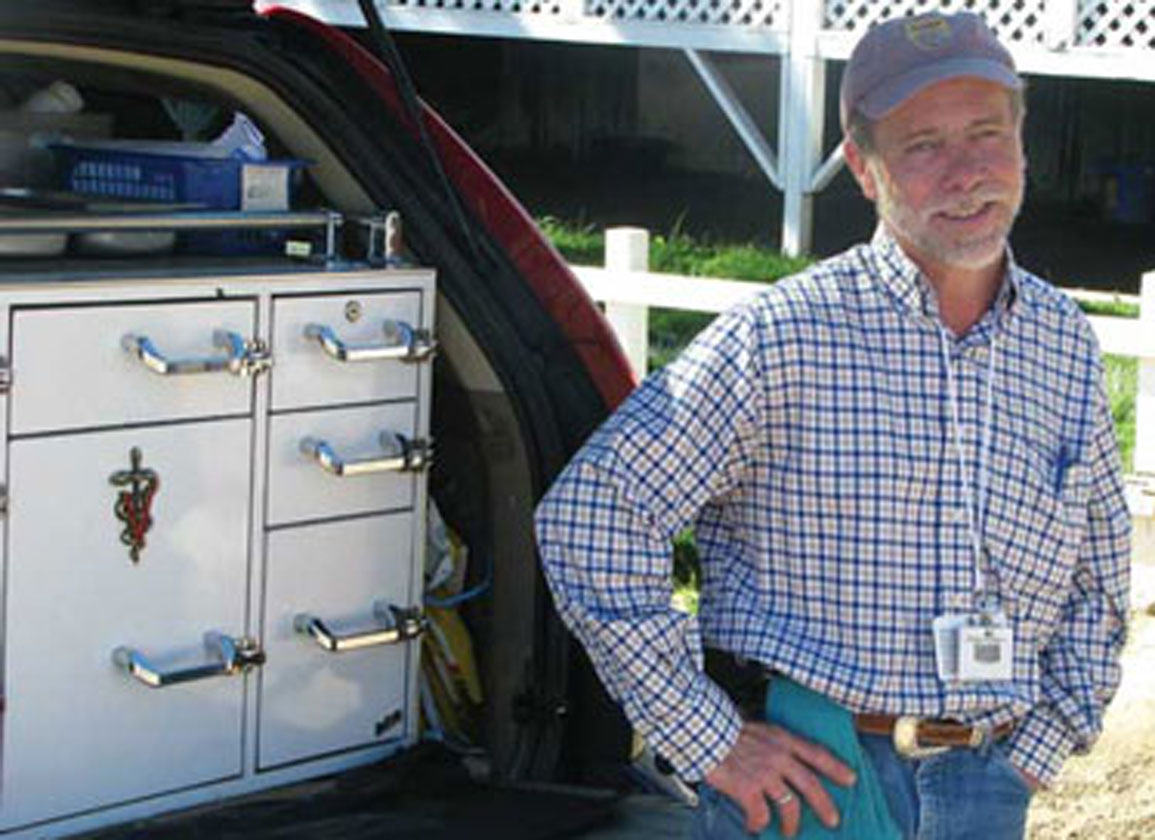 In a 15-page document dated Friday, Jan. 28 but posted to the Veterinary Medical Board’s website Wednesday, Chin wrote that despite Blea not currently practicing veterinary medicine, this still “does not ensure” public safety.

According to a UC Davis spokesperson, Blea remains on administrative leave from his position as equine medical director.

At the start of the year, the California veterinary board announced that an emergency hearing had resulted in an interim suspension of Blea’s veterinary license for a number of alleged offenses, including purportedly administering medications to racehorses without a prior examination, without forming a diagnosis and without medical necessity.

Chin presided over a formal hearing on that interim suspension on Jan. 21.

“I’m certainly disappointed,” said Blea’s attorney, George Wallace. “But I do not know, given the players involved, that it really is a surprise.”

According to Wallace, the veterinary board has 30 days with which to schedule a full hearing on the merits of the case once a notice of defense has been filed, though he warned that the timeline will likely take longer.

“I would expect that, by this time next week, we’ll have a much clearer idea of ​​where things are going to be steered,” said Wallace. “But at the moment, it’s an ongoing process. There are a lot of people whose opinions get to be heard on it, on all sides. ”

A timeline of events leading to the issuance of the charges against Blea can be read here.

A key wrinkle in the case concerns the question of whether or not the equine medical director position requires an active veterinary license.

The position is first appointed by the dean of UC Davis, and the university then contracts with the CHRB for the appointee’s services.

Historically, the equine medical director has not required an active license.

But in its argument for an interim suspension, the veterinary board claimed that Blea presents a “danger to public health, safety and welfare,” due to his oversight as equine medical director of the high-profile investigation into the death of Bob Baffert- trained Medina Spirit (Protonico), the Kentucky Derby winner who collapsed and died after a scheduled workout on Dec. 6 at Santa Anita.

The CHRB responded to Blea’s emergency interim suspension by bringing in the executive associate dean of UC Davis’s School of Veterinary Medicine, John Pascoe, to oversee the necropsy of Medina Spirit.

“The UC Davis School of Veterinary Medicine is aware of the interim order of suspension of Dr. Jeff Blea’s veterinary license has been upheld and is monitoring the situation as the legal process moves forward, ”wrote a UC Davis spokesperson, in an email.

“The School of Veterinary Medicine continues to fulfill its duties to provide equine medical director services for the CHRB,” the spokesperson added.

The CHRB has thrown its weight behind Blea, voting unanimously in closed session on Jan. 20 on their “support and confidence in Blea to continue in his role,” according to a statement issued last week.

The commissioners are “further committed to pursue appropriate legal avenues to protect the authority of the board, as well as preserve the contract with UC Davis,” the CHRB wrote, adding that “regardless of the outcome, Dr. Blea has their full support and confidence to continue in his role as EMD throughout the full adjudication process. ”

The TDN reached out to the CHRB for comment on the latest ruling but did not receive a response before deadline.

The veterinary board accuses Blea of ​​a number of offenses, including allegedly administering drugs to racehorses without a prior examination to form a diagnosis and determining medical necessity, failing to establish “any” veterinary-client-patient relationship, and of issuing drugs that are not FDA approved for equine administration.

A subsequent TDN investigation found a broad consensus among veterinary medical experts that the infractions are largely matters of poor record-keeping which rarely, if ever, rise to the level of a suspended license.

“When it comes to rising to the level of needing an immediate suspension, in my opinion, I do not think it reaches that level,” Bryan Langlois, former president of the Pennsylvania Veterinary Medical Association, told the TDN.

In her ruling, however, Chin suggests that the defense failed to provide at the administrative hearing an adequate rebuttal to the allegations, writing that while testimony from the veterinary board’s investigator, James Howard, was given “significant merit,” the affidavits submitted by the defendant were afforded “little” weight.

“Though each affiant asserts that the allegations were without merit and claims the allegations are based on a misunderstanding of racetrack practice, they provide no factual grounds for their conclusions,” Chin wrote.