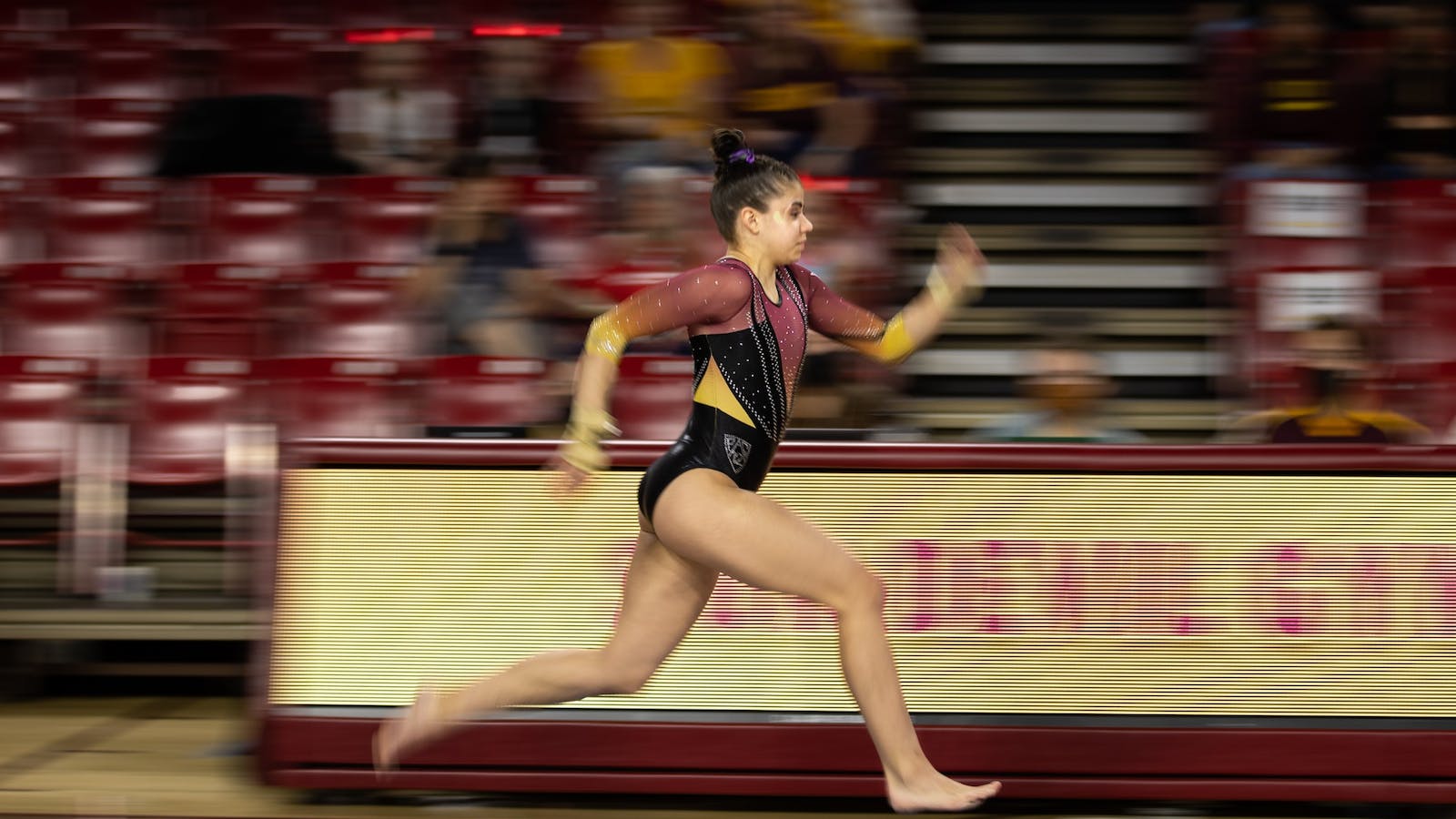 As a 19-year-old, the newly trained gymnast Alex Theodorou has been able to turn many heads through his hard work with gymnastics as well as dedication to his studies in the classroom.

When she was a small child, Theodorou was naturally energetic, so it was only fitting for her to take up the sport of gymnastics, she said.

“I was put into gymnastics at a very early age because I always jumped around the house,” Theodorou said. “I just fell in love with the sport and it became something I’ve done all my life.”

Theodorou started gymnastics as a 2-year-old when she attended a “mom and me” class with her mom. But as the competitive and driven person she is, Theodorou pushed her mother to the side in an attempt to learn on her own.

“It was so funny, she kept telling me I was going to get away from her and she could do it on her own,” said Theodorous mother, Christina Kwasnica. “So it was a little bit back then that I knew she really had to like this.”

It was only when Theodorou was 10 years old that it dawned on her that she could take gymnastics to the next level as long as she put in the work and the right time.

“Probably in elementary school, I started taking gymnastics more seriously,” Theodorou said. “It was starting to become something real, and something that I would spend most of my time on trying to get better and get to the next level.”

During her six years at Desert Lights Gymnastics, Theodorou grew to new heights as a gymnast, and she began collecting statistics and achievements. She won the Arizona Optional State Championships in both 2017 and 2018, the 2019 Arizona Level 6-10 State Championships, the 2020 Valley of the Sun Challenge and the 2021 Region One Championships.

When it came time to choose college, it seemed unlikely that Theodorou would stay in Arizona. But after being admitted to Barrett, The Honors College as a major in medical chemistry and being impressed with the culture of the gymnastics program, she knew it would be the best opportunity and opportunity for her to attend ASU.

“I loved the coaches and the atmosphere they brought to the team,” said Theodorou. “In addition, I’m from Arizona, so it was nice to be close to my family. The Barrett Honors program was a big thing for me because I wanted to be able to accelerate in my academic relationships as well as push myself athletically, so I thought ASU would do it for me. “

Even before arriving at ASU, Sun Devils co-head coach Jay Santos was honored by Theodorou, not only for her abilities on the mat, but for her work ethic and dedication to everything she had decided on.

“She’s such a talented gymnast, that’s what caught our attention,” Santos said. “She is a very motivated and driven individual. Her academics are off the charts. She is so consistent every day in how she takes care of things. These are amazing qualities to have for any gymnast.”

Theodorou started his collegiate career and was thrown into the fire immediately as the Sun Devils faced Michigan No. 1 to start the season. Although Michigan won, Theodorou made a name for himself right away, scoring the first 9,900 of the season for his team. Theodorou carried her significant achievement into Salt Lake City to face No. 2 in Utah, where she scored 9,825 or better in three of the events she attended.

Theodorous performance to start the season has been noted and recognized by all her teammates. People around Soldjævle know that Theodorou will be a force to be reckoned with in the coming years.

“I think she has a strong leadership role and personality that will work well with our team,” said junior Hannah Scharf. “I see she’s a really important star for this team, so I think she has a bright future here.”

While she is a talented gymnast, Theodorou aims to continue working hard and focus on her academics to go to medical school and become a doctor. That said, Theodorou has embraced every single moment of representing Sun Devil gymnastics and hopes to have a lasting impact on the program for years to come.

“I just want to keep growing and doing my best to help the team succeed,” said Theodorou. “It’s been such a great experience so far and I can’t wait to continue the journey.”

Reach the reporter at rmastey@asu.edu and stay tuned @MasteyRemy on Twitter.

Continue to support student journalism and donate to the State Press today.