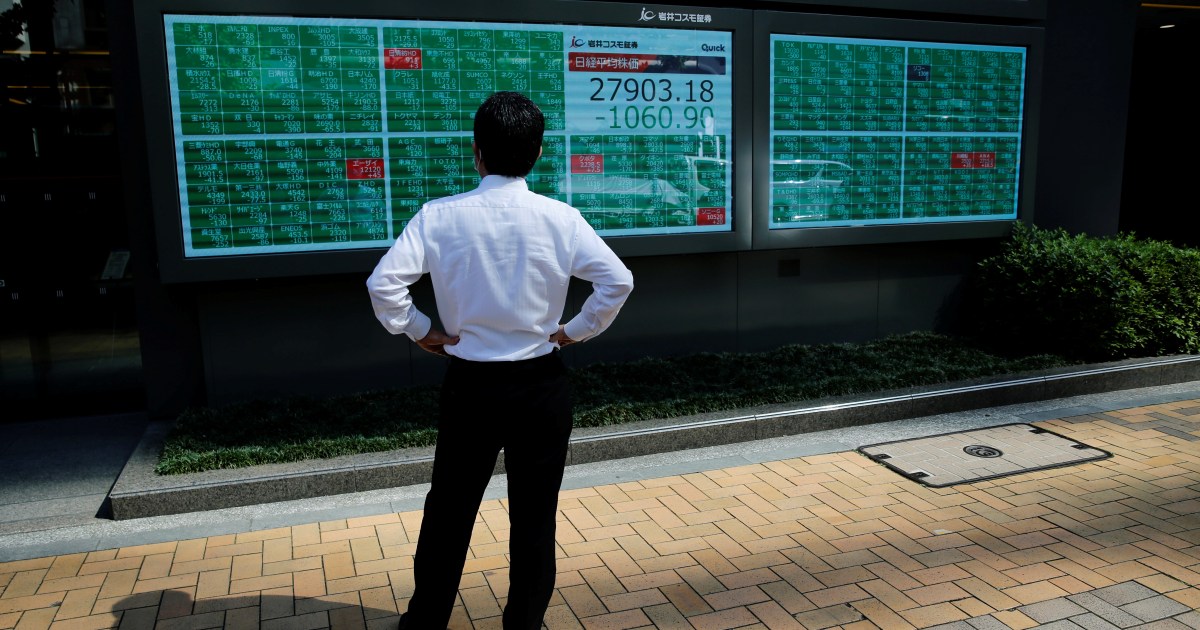 Overnight on Wall Street, retail giant Target Corp warned of a bigger margin hit due to rising costs as it reported its quarterly profit had halved. Its shares plunged 24.88 percent. The Nasdaq lost almost 5 percent while the S&P 500 lost 4 percent.

“The bounce on Tuesday was proven to have been ‘too optimistic’, thus the self-doubt stemming from the misjudgment only makes traders click the sell button even harder,” said Hebe Chen, market analyst at IG.

MSCI’s broadest index of Asia-Pacific shares outside Japan snapped four days of gains and slumped 1.8 percent, dragged down by a 1.5 percent loss for Australia’s resource-heavy index, a 2.1 percent drop in Hong Kong stocks and a 0.3 percent retreat in mainland China’s blue chips.

Tech giants listed in Hong Kong were hit particularly hard, with the index falling more than 3 percent. Tencent sank more than 6 percent after it reported no revenue growth in the first quarter, its worst performance since going public in 2004.

China’s technology sector is still reeling from a year-long government crackdown and slowing economic prospects stemming from Beijing’s strict zero-COVID policy, even though soothing comments from Vice Premier Liu He to tech executives had buoyed sentiment on Wednesday.

Two US central bankers say they expect the Federal Reserve to downshift to a more measured pace of policy tightening after July as it seeks to quell inflation without lifting borrowing costs so high that they send the economy into recession.

“It must be said that the concern for inflation has never gone away since we stepped into 2022. However, while things have not reached the point of no return, they are seemingly heading in the direction of ‘out of control’. That is probably the most worrying part for the market, ”IG’s Chen said.

The US dollar, which had rallied on falling risk appetite, eased 0.15 percent against a basket of major currencies, after a 0.55 percent jump overnight that ended a three-day losing streak.

The Aussie gained 0.8 percent, as an easing in Shanghai’s COVID lockdown helped sentiment.

“There may be short-term bounces in equities like the last few days, but the big picture is that the era of low yields is over, and we are transitioning to a higher rates environment,” Hafeez told the Reuters Global Markets Forum.
“This will pressure all the markets that benefited from low yields – especially equities.”

US Treasuries rallied overnight and were largely steady in Asia, leaving the yield on benchmark 10-year Treasury notes at 2.9076 percent.
The two-year yield, which rises with traders’ expectations of higher Fed fund rates, touched 2.6800 percent compared with a US close of 2.667 percent.