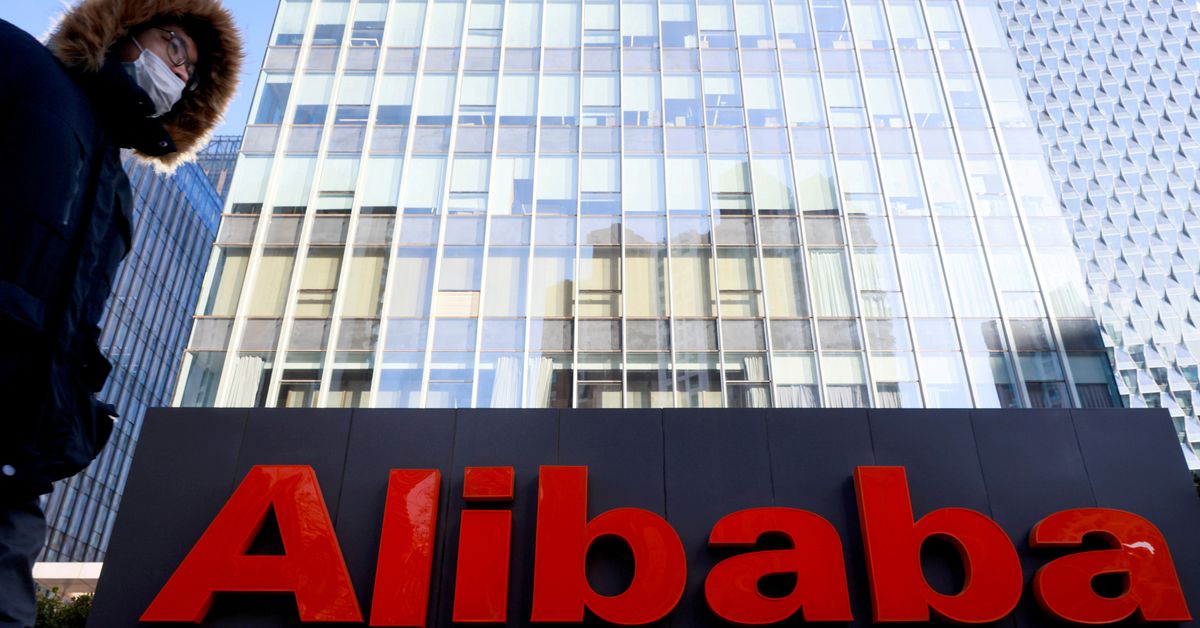 The logo of Alibaba Group is seen at its office in Beijing, China January 5, 2021. REUTERS / Thomas Peter

May 26 (Reuters) – Alibaba Group (9988.HK)on Thursday said it would not give a forecast for the current fiscal year due to COVID-19 risks as it reported its slowest quarterly revenue growth since going public in 2014.

The e-commerce giant said coronavirus resurgence in China, and lockdowns imposed to curb its spread in Shanghai and other cities weighed on its business by hindering merchants from shipping goods and making consumers focus on buying necessities.

April was the first month of Alibaba’s first fiscal year and one when the COVID-19 curbs hit particularly hard.

“To give you a sense of the scope of impact – Based on consumer address, cities with new COVID cases in April represented more than half of our China Retail Marketplaces GMV,” Zhang said, adding that Alibaba’s key supply chain and logistics hubs were also affected.

While delivery services resumed in May, they were taking time to fully recover due to factors such as parcel backlogs, the company said.

Alibaba said in a statement it believed it was “not prudent” to provide financial guidance for the year ahead given COVID-19-related risks outside of its control and which were “difficult for us to predict.”

The company reported revenue rose 9% to 204.05 billion yuan ($ 30.35 billion) in the January-March quarter – the slowest rise since its listing, but ahead of analyst estimates, and prompted its US-listed shares to rise by over 10%.

Alibaba said growing demand at Chinese commerce units such as Tmall Supermarket and Freshippo as well as niche shopping platforms such as Taobao Deals and Taocaicai helped boost sales. Analysts on average had expected revenue of 199.25 billion yuan, according to Refinitiv data.

COVID-19 lockdowns have prompted some analysts to downgrade their economic growth forecasts for China this year and businesses from retailers to chipmakers have in recent weeks warned of slow sales as local consumers curb spending. read more

Although its approach looks increasingly out of step with the rest of the world, Beijing has vowed to stick with its zero-COVID policy, saying that relaxing curbs could cause a high number of deaths and overwhelm its medical system.

But in a sign of its growing concern about the economic fallout, Premier Li Keqiang on Wednesday promised steps to bring the economy back on track.

Citing the meeting, Zhang said the Chinese government had sent “important policy signals” on its commitment to stabilize the economy and that Alibaba wanted to support those efforts.

Investors have also been jittery over the long-term outlook for Alibaba and its peers because of a regulatory crackdown on the tech industry and have been looking for signs that the worst might be over.

Asked about this on the call, Alibaba executives said they believed that authorities had delivered a “clear” message that they recognized the economic importance of platform companies like Alibaba and were committed to their healthy development.

Revenue in Alibaba’s cloud computing division rose 12% to 18.97 billion yuan in the reported quarter. At the core commerce unit, its largest, revenue rose 8% to 140.33 billion yuan.

Annual active consumers on its platforms reached about 1.31 billion for the fiscal year, including over 1 billion consumers in China for the first time.

On an adjusted basis, the company earned 7.95 yuan per share, above the 7.31 yuan estimate.

Ant Group, Alibaba’s fintech affiliate, reported a profit of about 22 billion yuan for the quarter ended December, according to Alibaba’s filings on Thursday, compared with 21.76 billion yuan a year ago.

Alibaba also said that it received a 3.9 billion yuan dividend from Ant Group, the first time the fintech conglomerate has paid out one.

Reporting by Nivedita Balu in Bengaluru; Editing by Anil D’Silva and Tomasz Janowski