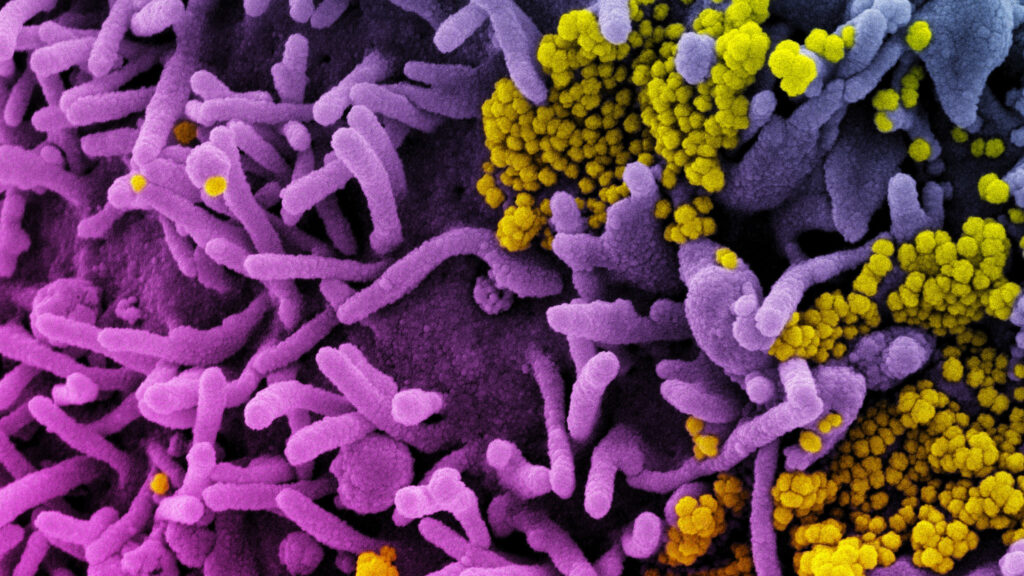 INn the ongoing struggle of SARS-CoV-2’s genes versus our wits, the virus that causes Covid-19 relentlessly probes human defenses with new genetic gambits. New variants of this coronavirus with increasing transmissibility have sprung up every few months, a scenario that is likely to continue.

Some experts believe that the pandemic appears to be on an evolutionary slide toward becoming endemic, a “new normal” in which humans and the virus co-exist, as we currently do with influenza. But coronaviruses are clever. While an endemic resolution may be in sight, SARS-CoV-2 could still shock the human species with a devastating evolutionary leap.

Here are four possible scenarios, each taken directly from the known evolutionary playbook of coronaviruses.

A slide toward endemicity

Humans currently coexist with four known endemic coronaviruses. Their scientific designations sound like technical code: 229E, OC43, NL63, and HKU1. Almost every person on earth becomes infected with all four of these viruses during childhood. These infections tend to be mild, causing only transient upper respiratory infections, hence the convenient shorthand name of common cold coronaviruses (CCC) for this gang of four. Because immunity to these coronaviruses wanes with time, infections can recur throughout the human lifespan.

Why Covid-19 vaccines are a freaking miracle

When the CCCs emerged and from where are hazy, but genetic analyzes suggest they probably originated in various animal species before crossing into humans hundreds of years ago. The likely ancestral origin of OC43 is a bovine coronavirus; the nearest neighbor for 229E is a coronavirus llama; and the others probably arose as inter-species jumps from the vast global reservoir of bat coronaviruses.

If the common cold coronaviruses did originally emerge from cross-species jumps of animal viruses into humans before germ theory and the modern science of microbiology, they would probably have been mistaken for influenza and not recognized as new diseases. As these species-jumping coronaviruses adapted to humans, there would have been selective pressure for more efficient transmission. When a virus adapts to a new host, it accrues no survival advantages by debilitating or killing its host. Just the opposite: a respiratory-borne virus is more easily transmitted by an ambulatory, socially interactive host.

Just as the four common cold coronaviruses likely started out as novel epidemic viruses that evolved toward endemicity, SARS-CoV-2 may well follow the same path and become the fifth CCC.

Most animal coronaviruses, including SARS-CoV-2, infect cells that line the gastrointestinal tract as well as those in the respiratory tract. Mutations can switch the ability of viruses to grow in the cells of one organ system to the cells of another. Among swine, a major shift occurred in 1984 when the transmissible gastroenteritis virus mutated to become the porcine respiratory virus. Among chickens, all strains of the infectious bronchitis virus affect the trachea, but some mutant strains have emerged that damage the kidneys.

In humans, SARS-CoV-2 has been found in the intestine, kidney, and central nervous system. A new SARS-CoV-2 variant with redirected preference for new organs (organ tropism) could produce new Covid-19 signs and symptoms.

Emergence of a new recombinant coronavirus

Viruses like influenza, HIV, and coronaviruses routinely swap genetic material between strains. If the genetic material of the human SARS-CoV-2 were to be combined with the genetic material of an existing animal coronavirus – such as a virus endemic in fowl, swine, rodents, or even dogs and cats – it could create a hybrid that spawns a new pandemic, just as the occasional hybridization of human and bird influenza viruses is known to give rise to human influenza pandemics. When an animal cell happens to be co-infected with two different coronaviruses, recombination between two parental strands can occur, giving rise to a novel hybrid genome that just might be better at replication than its parents.

There is already evidence that SARS-CoV-2 strains are recombining with other SARS-CoV-2 strains. Fowl coronaviruses spirit swine coronaviruses are widespread problems in commercial animal husbandry, and mouse hepatitis virus has been a common nuisance infection in laboratory mouse colonies. SARS-CoV-2-infected individuals who have close contact with coronavirus-infected animals could easily serve as hosts for the generation of recombinant viruses.

A computational biologist weighs in on Omicron, the future of vaccines, and the CDC’s variant forecast

Given the huge number of SARS-CoV-2 infected humans, the chances are good that someone somewhere on earth might be simultaneously infected with SARS-CoV-2 and an animal coronavirus – and some of their cells infected with both – giving rise to novel hybrid virus recombinants.

And given the high counts of SARS-CoV-2 genomes in human sewage systemsit is possible that a coronavirus-infected rodent or bird could encounter human SARS-CoV-2 through contact with human waste.

Regardless of where and how novel recombinant descendants of SARS-CoV-2 might arise, the new virus could evade SARS-CoV-2 immunity and could even have different disease manifestations than what has been seen with Covid-19.

In this worrisome scenario, SARS-CoV-2 evolves to not only evade its human host’s immune response but to actively exploit it. The successive major variants of SARS-CoV-2 so far – Alpha through Omicron – show that the relentless evolution of the virus helps evade the immune system. But some coronaviruses, like the feline infectious peritonitis virustake evasion to the next level: exploitation.

A similar perverse exploitation of the immune system can occur when humans are infected with dengue virus, which is not a coronavirus. A first infection with a dengue-type virus typically produces a self-limited, week-long illness with high fever and muscle and joint pain. The antibody immune response to that first infection renders a person immune to future exposures with that same type of dengue virus. But if the individual later becomes exposed to a dengue virus of a different type, the first infection increases the risk of severe disease instead of providing protection against it. How? In the human body, some cells have receptors for dengue viruses on their surface, while other cells have receptors for antibodies. Antibodies that bind to viruses normally prevent the virus from attaching to cells with dengue receptors. But these antibody-coated viruses can instead bind to, enter, and grow in the cells with antibody receptors on their surfaces. This process is called antibody dependent enhancement of virus growth.

‘What other variants might be out there?’ An expert on viral evolution on what’s happening with coronavirus mutations

Other coronaviruses that infect humans, such as SARS-CoV-1 spirit MERS-CoV, have been shown in laboratory studies to be able to exploit bound antibodies as a way to attach to cells and begin to replicate in them. SARS-CoV-2 viruses can also use antibody dependent enhancement to bind to cells with antibody receptors, with the virus having been shown to enter cells and begin to replicate. But in experiments so far, the full viral replication cycle was not completed in test cells.

The worry here is that if SARS-CoV-2 evolves to use antibody dependent enhancement to increase virus growth and transmission, the new variant could explosively retrace its spread through immune populations.

I’m not confident about how the pandemic endgame will play out. While I do think the most likely future scenario for SARS-CoV-2 is that it will become endemic, the other more worrisome scenarios I describe here are within the realm of possibility: a mutant that produces a different disease, a new recombinant virus, or a variant that exploits immunity. And these scenarios are not mutually exclusive. A new SARS-CoV-2 recombinant virus containing animal coronavirus genes might well cause altered disease.

Some other scenarios I haven’t discussed are also worth thinking about, like ongoing back-and-forth spillover from humans to animals and back to humans, or increased transmissibility from chronically infected people with “long covid.”

None of these epidemic scenarios is a fantasy. All are variations of the known evolution of real-world coronaviruses. A new viral variant can emerge anywhere on Earth to cover the globe in a matter of weeks, as SAR-CoV-2 did. Indeed, somewhere on Earth SARS-CoV-2 strains may have already evolved in one of more of the directions I describe here but have not yet been detected.

The world cannot afford to be blindsided again. Pandemic planners from the US, the World Health Organization, and other countries and organizations need to develop formal risk assessments and contingency plans for a wide range of possible pandemic futures.

Viral evolution requires ongoing viral transmission and replication. The more new viral particles generated, the greater the chance that new viral mutants and recombinants could emerge. Preventing disease and death is, of course, the main goal around the world. But countering the evolution of new variant viruses is another important mission. Doing this requires controlling SARS-CoV-2 replication by quenching person-to-person virus transmission. And this must happen everywhere on the planet, not just in the US

Technical and financial assistance for bringing transmission-blocking vaccines to low- and middle-income countries is not just an act of charity; it is an expression of enlightened national self-interest. The national security of the US and every other country depends on winning this global viral war.

Donald S. Burke is a professor of infectious disease epidemiology at the Graduate School of Public Health at the University of Pittsburgh, where he previously served as dean.